Alfred Augustin Watson, Episcopal bishop, was born in Brooklyn, N.Y., to Jesse and Hannah Maria Watson. He was graduated from New York University with a B.A. degree in 1837 and studied law in the office of Chancellor James Kent. Admitted to the bar in 1841, he gave up the practice of law to tutor the children of Josiah Collins of Somerset Plantation in Washington County, N.C. His parents were Presbyterians, but Watson became interested in the Episcopal services of the plantation household. Confirmed in the Episcopal church, he decided to study for its ministry and entered the General Theological Seminary in New York City. He was ordained deacon on 3 Nov. 1844 by Bishop Benjamin 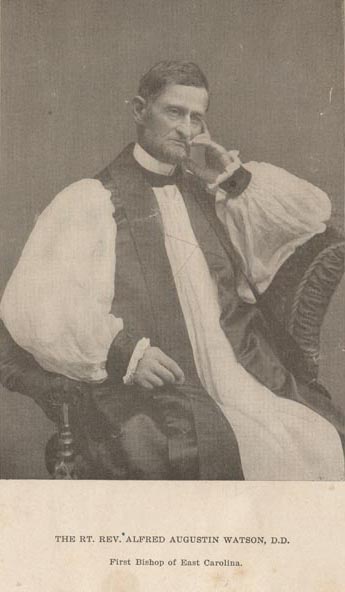 Onderdonk of New York and took charge of Grace Church, Plymouth, N.C., also serving St. Luke's, Washington County, and other missions, and helping to establish the Church of the Advent, Williamston. On 25 May 1845 he was ordained priest by Bishop Levi Silliman Ives, to whom he remained loyal until the bishop went over to the Church of Rome. After traveling in Europe for his health in 1855, Watson launched a campaign for a new church building in Plymouth.

After twice refusing calls to Christ Church, New Bern, he deferred to Bishop Thomas Atkinson's advice and accepted a third invitation in August 1858. To his new parish and its school he gave the same zeal and devotion that he had demonstrated at Plymouth. In July 1861 he became chaplain to the Second Regiment of Infantry, North Carolina State Troops, while continuing as rector of Christ Church. The next year, having resigned his commission and no longer being able to officiate in occupied New Bern, he was attached to the military hospital at Goldsboro.

In March 1863 Watson became assistant to Bishop Atkinson, who had taken over as rector of St. James's Church, Wilmington, on the death of the Reverend Dr. Robert B. Drane. Watson succeeded to the rectorship in December 1864. When, at the bishop's direction, he refused to offer prayers for the president of the United States, Federal forces occupied his church as a hospital and ordered him to leave Wilmington. Nevertheless, he remained on suffrance and continued to minister in private homes and at St. Paul's Church. In December 1865 he resumed services at St. James's, which his parishioners repaired without Federal compensation, and together they brought about a full recovery of the parish with increases in members, contributions, and property valuation.

In the matter of reunion with the Northern dioceses he differed with Bishop Atkinson, who participated in it. The University of North Carolina honored Alfred Watson, the New York native, in 1868 with a doctorate in divinity. During his rectorship, St. James's Parish supported St. Mark's Mission for the Negroes and St. James's House, later the Mission of the Good Shepherd. Watson played an important part in diocesan affairs, serving as a member and chairman of major committees and president of the diocesan convention, examining chaplain, delegate to the General Convention, and trustee of the General Seminary.

When, in 1883, the new Diocese of East Carolina was created after nearly twenty years of debate over division, Watson, who presided over the organizing convention, was unanimously chosen its first bishop. He was consecrated in his parish church of St. James on 17 Apr. 1884. The University of the South conferred on him the D.D. degree. Bishop Watson was preoccupied with continuing problems of men and money—finding and holding clergymen and securing adequate financial support from a relatively poor rural and agricultural area for diocesan missions. He commended the church's institutions of learning, particularly those in East Carolina: Trinity School at Chocowinity and St. Paul's School at Beaufort. In 1890 he traveled in Europe. Until overtaken by bodily infirmities he performed faithfully his duties as rural parish priest and later as chief pastor of the diocese, which he shepherded through its formative years and only relinquished at his death. He was buried in Wilmington's Oakdale Cemetery, leaving to his beloved diocese his library and part of his estate, which became the Bishop Watson Fund for the Support of the Episcopate. Alfred Watson was married three times. His first wife soon died, as did their infant child. Watson then married Fannie Livingston of New York and after her death, Mrs. Mary Catherine Lord. He had a sister, Elizabeth Watson, and two half sisters, Mary Wendell and Mrs. Augusta Palfrey. Elizabeth and Mary lived in his home and shared with his wife in his estate.

Journals of the Diocese of North Carolina (1844–).

Documenting the American South. "Alfred Augustin Watson, 1818-1905 Sermon Delivered Before the Annual Council of the Diocese of North Carolina, Upon the Festival of the Ascension, May 14, 1863." https://docsouth.unc.edu/imls/watson/menu.html (accessed June 10, 2014).

[Fayetteville? N.C. : Diocese of East Carolina?]. "Pastoral letter of the Bishop of East Carolina, to the clergy and latiy [sic] of his diocese, read before the council at Fayetteville, N.C., May 25, 1888." Internet Archive. https://archive.org/details/pastoralletterof00wats (accessed June 10, 2014).