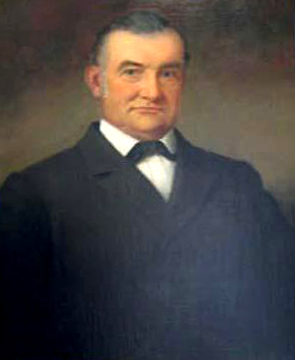 William Marcus Shipp, lawyer, judge, and attorney general, was born in Lincoln County. His father, Bartlett Shipp, an able lawyer "traveling on horseback hundreds of miles" as he followed the circuit court, was born in Stokes County in 1786 and is said to have been the first person of that name to settle in Lincoln. He served in the War of 1812 and was twice elected a member of the North Carolina House of Commons. William's mother was Susan Forney, the daughter of "General" Peter Forney, of Huguenot stock, who saw action with the rangers operating in the western part of the state in the Revolutionary War. British general Lord Charles Cornwallis is said to have occupied the Forney log cabin for three days during these skirmishes.

William M. Shipp attended the Pleasant Retreat Institute in Lincolnton, a school for boys, and then entered The University of North Carolina; during his graduation in 1840, he delivered the salutatory address in Latin. His cousin, Albert Micajah Shipp, was the valedictorian. Both young men were great-grandsons of Josiah and Nancy Cox Shipp of Lunenburg County, Va., and grandsons of Thomas and Hannah Joyce Shipp of Surry County, N.C. As a private in the Revolution, Thomas saw action in North Carolina.

After reading law in Morganton, Shipp received his license in 1842 and settled in Rutherfordton, then a leading town in the western part of the state. He represented Rutherford County in the House of Commons during 1854–55. In 1857 he bought the house of Judge John Baxter in Hendersonville and soon built up a large law practice there. Shipp was a delegate to the constitutional convention of 1861–62, and in the latter year he was elected to the senate.

During this period he enlisted in the Confederate army and was made captain of Company I, Sixteenth Regiment, which served with the Army of Northern Virginia. Its marchings ranged from the cold mists of Valley Mountain in the west to the tidal waters of Yorktown, Va., and included numerous frays and some major battles such as those at Harpers Ferry, W.Va., and Mechanicsville, Va. On 16 Dec. 1862, after over a year of service, Shipp resigned to accept a superior court judgeship back home and held that post until 1868, when he was defeated by George W. Logan.

Shipp then moved to Charlotte to practice law. However, the clarion call to arms soon sounded with the coming election of 1870, an era of rebellion against Reconstruction, "the time of the carpetbagger and the scalawag." Feelings ran high. The Democrats nominated Shipp, a former "staunch Whig," who was regarded as "a man of ability and good record," for attorney general. His opponent was Samuel F. Phillips of Orange County. Shipp won in a close race and was said to have been the only man on the ticket to be elected.

He was soon appointed chairman of a three-man committee to investigate charges of fraud, corruption, and "general official venality." This involved the Cape Fear Navigation Company, which operated between Wilmington and Fayetteville and was in a sad state of physical neglect; the missing Penitentiary Bonds and other vanished records; and various western railroads, such as the Wilmington, Charlotte and Rutherford line, where excessive fees and discounts had increased the cost 23 percent in ten months. It was claimed that bonds had been given to legislators to influence their votes.

Possibly the inquiry had made Shipp unpopular in some circles, but on the other hand the Republicans gained in the election of 1872 and Shipp was defeated by Tazewell Hargrove. Shipp then applied for payment of $4,700 in fees not collected when he was a judge from 1862 to 1865 under the "Provisional Government." Hargrove rejected the claim, labeling it the "Back Salary Grab," and said the money should have been collected at the time. But Shipp's talents were not entirely overlooked. In 1881 Governor Thomas Jarvis appointed him judge of the Ninth Judicial District of the superior courts, a position he held until his death.

Jerome Dowd remarked that "Judge Shipp was one of the best informed lawyers in the State. He had a markedly legal mind, reasoned closely and as a jurist was eminent. He had no superior on the bench." Shipp was fond of reading history and the standard literature of the time. Like his lawyer father, he was quick-witted and full of humor and repartee. His sayings were a byword among lawyers over much of the state.

Shipp was married twice. In 1851 he wed Catherine Cameron, the daughter of John A. Cameron. Their four children were Anna, who married Dr. Sumner McBee; Catherine, who founded Fassifern, a well-known school for young ladies at Lincolnton, which later moved to Hendersonville; William Ewen, the husband of Margaret Busbee and a graduate of West Point, who was killed at the Battle of San Juan Hill during the Spanish-American War; and Bartlett, a University of North Carolina graduate who practiced law in Charlotte and Washington State, then returned to Lincolnton and married Prue Crouse.

The first Mrs. Shipp died in 1866, and in 1872 Shipp married Margaret Iredell, the daughter of Governor James Iredell. Their only child was Mary Preston of Raleigh. Shipp, a member of St. Peter's Episcopal Church in Charlotte, was buried in Elmwood Cemetery. Other close relatives were interred at St. Luke's Episcopal churchyard in Lincolnton.

Report of the Commission to Investigate Charges of Fraud and Corruption, under Act of
Assembly, Session 1871-72. Raleigh: J. H. Moore. 1872. https://archive.org/details/reportofcommissi00nort (accessed October 15, 2012).