John Adams Cameron, lawyer, banker, editor, consul, and judge, was born in Mecklenburg County, Va., son of John Cameron (1744–1815), a native of Scotland and Presbyterian minister, and Anne Owen Nash (d. 1825), a niece of Abner Nash, governor of North Carolina in 1780–81. John Adams Cameron moved to North Carolina with his older brother, Duncan, when he was about ten. He received his bachelor's degree from The University of North Carolina in 1806 and his master's there in 1809. He then studied law and began to practice in Fayetteville, which he represented in the lower house of the General Assembly in 1810, 1811, 1812, and 1820. In 1820 and 1821 he was grand master of North Carolina Masons.

During the War of 1812, Cameron organized a troop in Fayetteville and held the rank of major. His military duties did not occupy him fully, however, because in 1812 he was the unsuccessful Federalist candidate for Congress against Republican John Culpepper. In 1815 he petitioned the assembly for the office of comptroller of the state, claiming that his capacity to practice law had been lost in the service of his country. He married Eliza Adam in January of 1815, but she did not live long; in October of 1818 the newspapers reported his marriage to Catherine Halliday, widow.

Federalists in 1817 obtained for Cameron the job of president of the Fayetteville branch of the U.S. Bank. Republicans in the assembly opposed the bank and placed a tax on it, which Cameron refused to pay when the U.S. Supreme Court denied the right of states to tax instrumentalities of the national government (McCulloch v. Maryland, 1819). In 1820, Cameron was again in the House of Commons from Fayetteville and active in the movement to revise the state constitution. In 1823 he was a delegate to the Internal Improvements Convention in Raleigh; by this time he was beginning to move away from his old Federalist ties.

In 1825 it was announced that Cameron would become the editor of the Fayetteville North Carolina Journal, which under his leadership became an abrasive champion of the cause of Andrew Jackson. In 1827 the editor was candidate, against his old opponent Culpepper, for the Fayetteville seat in Congress. Their political roles were reversed, but Culpepper was again successful. In 1829, Culpepper having retired, Cameron campaigned again as the Jackson candidate, this time against National Republican Edmund Deberry. Deberry, who accused Cameron of being overbearing and of having squandered two fortunes, won by slightly more than two hundred votes.

Defeated politically and in need financially, Cameron had to sell the Journal in 1830. Shortly thereafter, President Jackson gave him an appointment as consul to Vera Cruz, but the revolutionary state of Mexico and the low pay of State Department employees at that period soon reduced Cameron's financial circumstances even further. He again contacted his influential friends in Congress to find him a better job. This time he received an appointment as judge of the Western District Court of Florida, and in 1832 he moved to Pensacola. Six years later he boarded the new steamship Pulaski at Savannah for a trip north. Near midnight on 14 June 1838, the starboard boiler of the ship exploded. There were almost one hundred victims, and Cameron's body was never found. 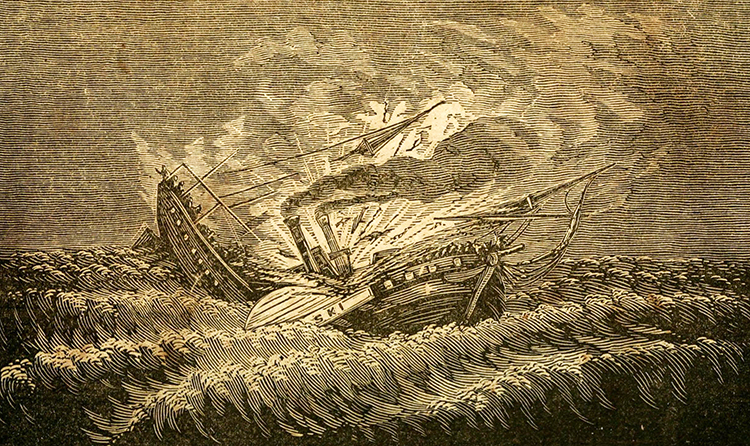 Are you able to provide the

Are you able to provide the date of the death of Eliza Adam or Cameron and where she was staying in Ardrossan, Ayrshire, Scotland, at the time of her death?