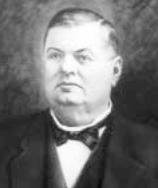 John Baxter, lawyer, legislator, southern Unionist, and U.S. circuit court judge, was the son of Irish immigrants, Catherine Lee and William Baxter, who had settled in Rutherford County. He was a brother of Elisha Baxter and an uncle of Plato Durham. Baxter's early education was confined to the rural schools of Rutherford County. After a try at business, he read law and was admitted to the bar in 1840. In 1842 he married Orra Alexander of Buncombe County and in the same year was elected to the House of Commons as a Whig from Rutherford County. In 1844 he was a presidential elector on the Henry Clay ticket. Moving to Henderson County in 1845, he was elected to the legislature there the next year and sponsored the act chartering the town of Hendersonville. Elected to three more successive terms, beginning in 1852, he served as speaker during the first of them. Baxter was an outspoken supporter of Western sectional interests within the state, including legislative reapportionment, and also of increased industrialization.

In 1857, Baxter moved to Knoxville, Tenn., in order to further his legal career. Within a short time he was reputed to be the highest paid lawyer in East Tennessee.

During the secession controversy, Baxter was an ardent Unionist, along with most other prominent East Tennesseans. In January 1861 he was elected as a Unionist to the state's proposed secession convention, which never met, being voted down by a popular referendum. Later that year he went to Richmond, Va., where he persuaded Confederate authorities, including President Davis, to refrain from widespread arrests of East Tennessee Unionists. At about the same time, Baxter was himself persuaded by Zebulon B. Vance of North Carolina to cooperate with the Confederacy in order to prevent Rebel excesses against Tennessee Unionists. Late in 1861 he ran for the Confederate Congress but was soundly defeated by an ardent secessionist in an election that most Unionists boycotted. In the spring of 1862, Baxter went on private business to Memphis, where he was briefly arrested as an enemy of the South. After this incident he drifted back toward his original Unionism. In 1864 he and other Unionists reacted to the Emancipation Proclamation by supporting McClellan and the national Democratic party.

After the war, Baxter was a vocal opponent of William G. Brownlow's Radical Republican administration. In 1870, when the Conservatives regained power, Baxter was elected to the new constitutional convention and was chosen by the members as chairman of the judiciary committee. In 1872 he joined with Thomas A. R. Nelson and Joseph S. Fowler in an effort to establish the Liberal Republican party in Tennessee and participated in the Cincinnati convention, which nominated Horace Greeley for president. With the failure of that movement, Baxter returned to the Republican party and supported Rutherford B. Hayes for president in 1876. The next year, Hayes appointed him judge of the circuit court for the Sixth Circuit, which included the states of Tennessee, Kentucky, Ohio, and Michigan. On the bench, Baxter was characterized as a knowledgeable student of the law, who could grasp the sense of a case without tarrying over technicalities.

In 1879, Baxter became a trustee of the University of Tennessee. In that capacity he advocated the admission of black students, provided they lived in separate dormitories.

Baxter died in Hot Springs, Ark., where he had gone for relief of an arthritic condition. He was survived by five children, including George W. Baxter, a governor of Wyoming Territory. He was buried in Old Gray Cemetery in Knoxville.

Temple, Oliver Perry. Notable men of Tennessee, from 1833 to 1875, their times and their contemporaries. New York, The Cosmopolitan press. 1912. https://archive.org/details/notablemenoftenn00temp (accessed April 8, 2013).

Judge John Baxter. Courtesy of The Historical Society of the United States District Court For The Eastern District of Tennessee, Inc. Available from http://www.tned.uscourts.gov/docs/0500history.pdf (accessed April 8, 2013).