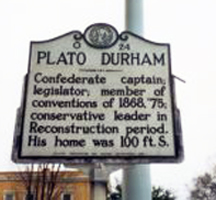 Plato Durham, legislator and Conservative political leader during Reconstruction, was born at High Shoals (later Henrietta), Rutherford County, the eldest son and fourth of thirteen children of Micajah and Esther Baxter Durham. Although the family was well off by the standards of the time and place, Durham's early education was gained, in the words of his son, "at the county schools and at the plow handles." When he was about eighteen he began reading law in Rutherfordton and then continued under his uncle, John Baxter, in Knoxville, Tenn. At the outbreak of the Civil War, Durham joined a Confederate military company in Knoxville; however, he soon returned to North Carolina, enlisted in a Cleveland County company in June 1862, and quickly saw active service as part of the Army of Northern Virginia. Rising from private to captain, he was never far from the sound of battle until the guns fell silent at Appomattox. In fact, his company claimed to have fired the last shots in that battle. Durham emerged from the war with an enviable record for gallantry and with a wholehearted dedication to the "Lost Cause." His father, an enthusiastic member of the Secession Convention of 1861, enlisted in the army at an advanced age and lost his life, as did two of his other sons. 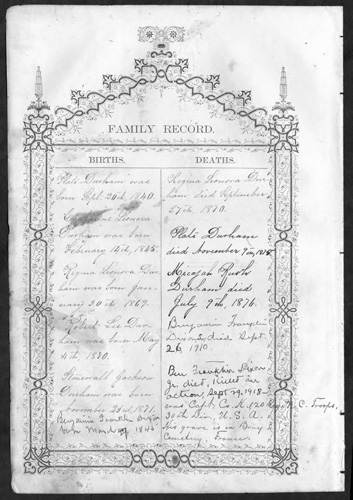 After the war Durham attended The University of North Carolina law school and was admitted to the bar at Shelby in August 1866. His legal practice soon won him distinction and financial success. On 9 Apr. 1868 he married Nora Catherine Tracy, daughter of Dr. James Wright Tracy of Kings Mountain. They had five children, Nora Catherine, Robert Lee, Stonewall Jackson, Plato Tracy, and Micajah Rush, the first and last dying in infancy.

Durham's public service began with his election to the legislature of 1866–67. In the Constitutional Convention of 1868 he emerged as a bold and articulate leader of the Conservative minority, advocating the inviolability of the state debt, the removal of political liabilities from ex-Confederates, and the barring of African Americans from holding public office or serving as guardians of white children. He was similarly an outspoken minority leader in the legislature of 1868–70. He ran for Congress in 1868 and was declared elected by a margin of eighteen votes. However, the result was set aside by General E. R. S. Canby on grounds of fraud; on a recount the seat was awarded to his Republican opponent, A. H. Jones. Durham again received the Democratic nomination in 1870 but withdrew at the last moment because of his inability to take the test oath if he was elected. Denied the nomination (which he felt rightfully to be his) in 1874, he ran as an Independent but lost to the regular Democratic nominee. For several years after 1871 he edited the weekly Cleveland Banner in Shelby.

Durham joined the Ku Klux Klan in late 1868 or early 1869. He regarded it as a political weapon against the Republican party, but like other upper-class members he became alarmed by its uncontrolled attacks on obscure African Americans and white Republicans. He tried unsuccessfully to curb the violence, only to become further enmeshed himself in the tangled web of conspiracy and illegality surrounding the order. He was arrested by federal authorities in 1871 but was never brought to trial. For two years his major efforts were directed to exculpating fellow Klansmen, serving them as defense counsel, raising money for their bail and reportedly to bribe jurors, and seeking executive clemency for those convicted—all at considerable personal sacrifice.

Durham's final political service was in the Constitutional Convention of 1875, where he was a leader in dismantling Radical Reconstruction; he also advocated legislative regulation of railway rates. Later that year his life was cut short by pneumonia at the age of thirty-five. He was a Methodist. The University of North Carolina owns an oil portrait of Durham; it was reproduced in the Charlotte Observer, 26 Mar. 1933.