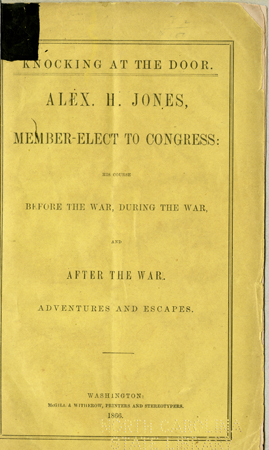 Alexander Hamilton Jones, newspaper editor and Republican congressman, was born in Buncombe County near Asheville where he received his early education. He explained that during his youth he taught himself "to love the Union next to my God" by reading the lives of George Washington and other national heroes as well as the history of the United States. After his early schooling, he attended Emory and Henry College.

In 1843 Jones married Sarah D. Brittain (by whom he had five children—Charlotte, Julia, Hester, Thadeus, and Otto) and settled on a farm. After service in the War with Mexico, he developed rheumatism and his doctor advised him to give up farming. Therefore, in 1851 he moved with his family to Hendersonville and became a merchant. From this career Jones earned a modest living, owning $700 in real property and $9,000 in personal property in 1860. In that year, business circumstances led him into politics. While administrator of the Hendersonville Times, he was asked to fill the unexpired term of the editor. In this capacity he expressed his Whig philosophy, extolling the virtues of the Union and condemning secessionist efforts.

In 1861 Jones assumed a role in the campaign against calling a convention to vote on secession. He was a candidate for a seat in the convention but was not chosen. During the Civil War he helped form a secret Union League, whose members pledged never to fight against the Union. He also wrote many articles under fictitious names, charging that the Confederates were traitors, that secession was achieved by undemocratic methods, and that the war was a rich man's cause and a poor man's fight. In 1862 he was an unsuccessful candidate for the state legislature as a Union man.

By 1863 Unionists in western North Carolina, including Jones, were forming companies to protect themselves against Confederate conscription officers. But Jones felt more had to be done, and on 31 Aug. 1863 he left for eastern Tennessee to join the Union Army. Arriving in Knoxville in early September, he reported to generals Samuel Carter and A. E. Burnside. From them, he received authorization to raise a regiment of North Carolina volunteers. However, just as he was starting his recruiting efforts, Jones was captured by the Confederates and spent many months imprisoned in Asheville, at Camp Vance, at Camp Holmes, and then at Libby Prison in Richmond. Finally, to win his release, he volunteered to serve in the Confederate Army. But in November 1864 he escaped from prison without fighting for the Confederacy. Jones made his way to Maryland and reported to the Federal officer in charge of the army stationed there. After being transported around by the army, he arrived back in Knoxville on 1 Mar. 1865. A month later the war ended without Jones having served officially in either army. (His name does not appear in either the Confederate or Union service records.)

On returning home to Hendersonville, Jones became active in Reconstruction politics, calling for the return of peace and harmony as well as for legal equality for blacks. He served in North Carolina's 1865 constitutional convention which abolished slavery, declared the ordinance of secession null and void, and repudiated the state's Confederate debt. In the same year he was elected to Congress from the Seventh Congressional District. Jones was the only congressman from North Carolina elected in 1865 who could take the then required test oath. However, along with the other Southern congressmen-elect, he was not permitted to take his seat.

In 1866 Jones established the Henderson Pioneer. As the paper's editor, he spoke for the Union and against Governor Jonathan Worth, for the common man and against the old slaveholding class. He also advocated internal improvements, including the construction of railroads, the encouragement of home manufacturing, and the development of mineral and other resources. He supported ratification of the Fourteenth Amendment and legal and political equality for blacks. In 1866 Jones served as a delegate to the Loyalist Convention, which met in Philadelphia. By 1867, he and his paper sided completely with the congressional Republicans' reconstruction policies. Jones became a charter member of North Carolina's Union League and an active politician in the Republican party. In July 1867 he moved his newspaper to Asheville, where it continued as a Republican paper under Jones's editorship until he turned to a new career the following year.

In July 1868, Jones was elected to Congress. After serving two terms (6 July 1868–3 Mar. 1871) in the Fortieth and Forty-first Congresses, he was defeated for reelection in 1870 when the Democrats swept the state. Jones remained in Washington until 1876; he then resided in Maryland until 1884, in Asheville until 1890, and in Oklahoma until 1897. In the latter year he moved to Long Beach, Calif., where he died and was buried in Signal Hill Cemetery.

Jones, Alex. H. "Knocking at the Door.  Alex H. Jones. Member-Elect to Congree: His Course Before the War, During the War, and After the War.  Adventures and Escapes." Washington: Mcgill & Witherow, Printers and Stereotypers. 1866.