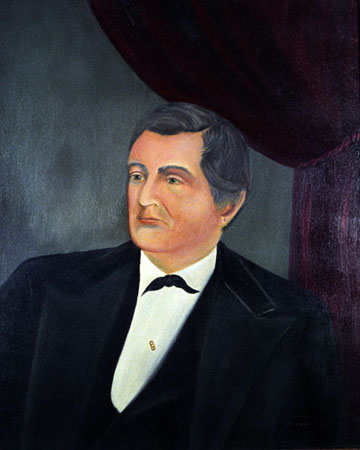 Elisha Baxter, governor of Arkansas and a protagonist in the Brooks-Baxter War there, was born in Rutherford County, the seventh of eight children of William and Catherine Lee Baxter. He was a brother of John Baxter and an uncle of Plato Durham. Elisha received only a rudimentary schooling and turned down a West Point appointment at the insistence of his aged father. At the age of twenty he went into the mercantile business in Rutherfordton with his brother-in-law, Spencer Eaves. In 1849 he married Harriet Patton of Rutherford County, who bore him six children: Millard P., Edward A., Catherine M., George E., Hattie O., and Fannie E.

Baxter moved to Arkansas in 1852 and settled at Batesville, where he opened a general store the next year in partnership with his brother, Taylor Baxter. The business failed in 1855, and he went to work in the printing office of the Independent Balance. At the same time he read law; he was admitted to the bar and began practice in 1856.

The business failure may have resulted from Baxter's growing preoccupation with politics. A Whig, he was elected mayor of Batesville in 1853, the year after he moved there, and he was sent to the state house of representatives in 1854 and 1858. He opposed secession and, when it came about, tried to remain neutral, refusing either to support the Confederacy or to take up arms against his friends and neighbors. In 1862 he turned down a Federal colonelcy, but his neutral stance made his personal and professional life so difficult that he took his family to Missouri for safety. Nevertheless, Confederate cavalry captured him there in 1863 and sent him back to Arkansas to face charges of treason. Baxter escaped from prison in Little Rock before his case came to trial. Stung by charges of disloyalty and cowardice, he made his way to Batesville, raised a regiment of Arkansas Federals, and became its colonel. 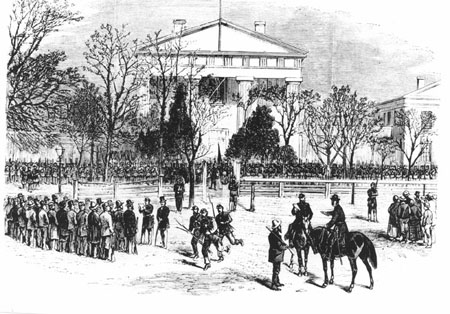 In the spring of 1864, Baxter was elected to the state supreme court under the new Unionist government of Isaac Murphy. He had scarcely assumed this office when the legislature elected him to the U.S. Senate. Owing to congressional dissatisfaction with presidential Reconstruction, Baxter and his colleagues were not seated, and he returned to his law practice in Batesville. When the Republican Reconstruction regime was organized in 1868, Governor Powell Clayton appointed Baxter a circuit judge. He served as judge (and also federal register in bankruptcy) until the Republicans nominated him for governor in 1872.

Baxter's reputation was that of a political moderate, affiliated with the Republican party but not closely associated with its leadership or the alleged improprieties of radical rule. Nevertheless, it was the Clayton ("Minstrel") leadership that secured his gubernatorial nomination; the rival "Brindletail" faction named Joseph Brooks, a northern native, whom the Democrats also endorsed. After a heated campaign marked by many irregularities, Baxter was declared elected by a slim margin of 2,919 votes and took office on 6 Jan. 1873. As governor, he supported financial economies and a return of voting privileges to disfranchised ex-Confederates; he appointed a number of Democrats to office. These policies brought a reversal of political alignments. Democrats generally came around to Baxter's support, abandoning Brooks's efforts to gain the governorship by court action on grounds of fraud. Republicans for the most part switched to Brooks by the spring of 1874.

The state supreme court, under Republican control, then ruled in Brooks's favor, whereupon he went to the capitol building with a few supporters and ejected Baxter from the governor's office. Baxter refused to yield and set up headquarters in a building nearby. Both claimants appealed to Washington and called out the militia for support. As rival forces converged on Little Rock, an armed outbreak seemed imminent, but nothing of consequence occurred. The national administration refused to choose between Brooks and Baxter, holding that it was up to the state legislature to decide. As a result of many vacancies and special elections that Republicans refused to contest, legislative control had passed to the Democrats, and the legislature declared for Baxter. Brooks retired from the field, but Baxter's term was cut short by the adoption of a new Democratic-sponsored constitution calling for a gubernatorial election in 1874. Democrats offered Baxter the nomination for a full new term, but he declined rather than incur the charge of having sold out to them for a longer lease on the governorship. On 12 Nov. 1874 he retired to his home at Batesville, where he practiced law and farmed until his death.

Ross, Margaret. “Governor Elisha Baxter Was a Unionist—And He Suffered for It in Civil War.” Chronicles of Arkansas. Arkansas Gazette. December 4, 1966, p. 6E.

Official gubernatorial portrait of Elisha Baxter, tenth governor of Arkansas (1873–1874). Courtesy of the Arkansas Secretary of State's Office and the Old State House Museum via the Encyclopedia of Arkansas History & Culture. Available from http://www.encyclopediaofarkansas.net/encyclopedia/media-detail.aspx?mediaID=31 (accessed April 8, 2013).

"Troops supporting Joseph Brooks in the Brooks-Baxter War, an armed conflict between the supporters of Brooks and those of Elisha Baxter, rivals for the governorship; April/May 1874." Courtesy of the Arkansas History Commission via the Encyclopedia of Arkansas History & Culture. Available from http://www.encyclopediaofarkansas.net/encyclopedia/media-detail.aspx?mediaID=6127 (accessed April 8, 2013).