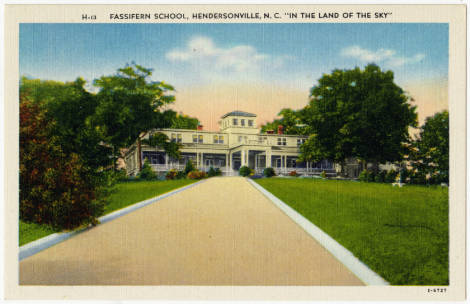 The Fassifern School, a noted preparatory school for girls, was established in Lincolnton in 1907 by Catherine Cameron Shipp, the daughter of state attorney general William Marcus Shipp. From 1898 to 1902, she and her sister, Anna Shipp McBee, had successfully operated a coeducational preparatory school in Lincolnton. In 1902 Shipp enrolled at Cambridge University in England. Upon her return to North Carolina in 1904, she taught at Saint Mary's until she opened Fassifern, named for an ancestral home that Shipp had visited in the Highlands of Scotland.

Located on the northwestern side of Lincolnton, the original campus consisted of a large frame house nestled in an oak grove near the banks of the South Fork River. The stated mission of Fassifern was "to prepare girls for the best colleges, or to be self-supporting, and to help them become lovers of the best in literature, music, and art." Assisted by her sister and an able faculty, Shipp operated the school much like a Christian home, with a heavy emphasis on academics, religious and physical training, and self-discipline.

Students came from throughout North Carolina as well as other states, and Fassifern gained a reputation as one of the South's best preparatory schools. Despite an addition to the physical plant, the Lincolnton facility quickly became inadequate for an ever-increasing enrollment.

Enticed by an offer from a group of businessmen from Hendersonville, Shipp moved the institution to that mountain town in 1914. On its spacious new campus highlighted by colonial-style architecture, the school continued to grow and prosper under the tutelage of "Miss Kate."

Soon after her sister died in 1924, Shipp sold Fassifern to Joseph R. Sevier, a Presbyterian minister. Sevier and his son John successfully operated the school for a quarter of a century. Fassifern School continued operation on the Hendersonville campus until 1951, when John Sevier moved to Atlanta to accept a position with Southern Airways.

I have a girl's gold ring

I have a girl's gold ring with FASSIFERN and the year 1936 with the initials A J R inside the band. I would like to return it to the owner.

My stepmother, Marian Leyva, attended Fassifern graduating with the class of 1938.
She twas sent by her parents from Havana, Cuba, to perfect her English skills.
Marian was born in New York City in August of 1919.
Do you have any information of other classmates from the class of 1938?
She still keeps her 1937 and 1938 Yearbook.

Thank you for visiting NCpedia and taking time to share your family history and question.

my family has been told our

my family has been told our grandmother Otta Ewing attended Fassifern college any information you could give us would be appreciated, she lived in Lincolnton

Thanks for visiting this entry and taking time to post your question.

Could you give me a better idea of what you're interested in learning?  That will help me direct you to appropriate services or resources.