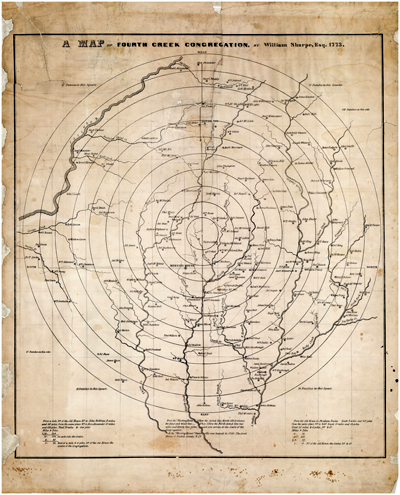 William (Lawyer Billy) Sharpe, lawyer, surveyor, land speculator, militia officer, and local and state political leader, was born near Rock Church in Cecil County, Md., the son of Thomas, Jr. (1718–85), and Elizabeth Sharp. His parents used the form Sharp, but he spelled it Sharpe. His grandfather, Thomas Sharp, Sr., had migrated from Scotland to Cecil County. William received a good education and read law. Although the exact date of his arrival in North Carolina is uncertain, evidence indicates that he joined a large group of Marylanders who moved into the southern Piedmont between the Catawba and Yadkin rivers. He was admitted to the bar in Mecklenburg County in 1763.

On 31 May 1768 Sharpe married Catherine Reese, the daughter of David Reese, a justice of the Mecklenburg County Court and an early supporter of the American cause. Land records indicate that in late 1768 or early 1769 Sharpe moved from Mecklenburg to western Rowan (now Iredell) County.

Like his father-in-law, Sharpe early became involved in Revolutionary activities. He was a member of the Rowan County Committee of Safety from 1774 to 1776 (appointed 23 Sept. 1774) and served as secretary. The minutes of the committee, now lost, were preserved by the Sharpe family and published in John H. Wheeler's Historical Sketches of North Carolina (1851). Along with Griffith Rutherford and William Kenyon, Sharpe represented Rowan County at the Second Provincial Congress, held in New Bern (3–7 Apr. 1775), where he signed a pledge to support the Continental Association. One of seven delegates from Rowan County in attendance at the Third Provincial Congress at Hillsborough (20 Aug.–10 Sept. 1775), he subscribed to an oath of allegiance to George III while denying the right of the British government to tax the colonies. The following year he and Hezekiah Alexander of Mecklenburg County represented the Salisbury District on the Provincial Council of Safety (5 June–25 Oct. 1776). It was the Council of Safety that exercised the executive functions of the Revolutionary government prior to the drafting of a state constitution in December 1776. While Sharpe was serving on the Council of Safety, he accompanied North Carolina militia troops commanded by Brigadier General Griffith Rutherford on a successful campaign against the Cherokee Middle and Valley settlements.

At the Fifth Provincial Congress, held in Hillsborough (12 Nov.–23 Dec. 1776), Sharpe, again a delegate from Rowan County, was placed on several committees, the most noteworthy being a committee to draft a bill of rights and constitution for the new state of North Carolina. He, Waightstill Avery, Robert Lanier, and Joseph Winston were appointed to negotiate a treaty with the Overhill Cherokee. By the Treaty of Long Island of Holston (July 1777), the Overhill Cherokee ceded claims to tribal lands east of the Blue Ridge as well as a corridor from the Watauga settlements to North Carolina. Cherokee hostages were sent to Sharpe's home to ensure compliance.

Sharpe was first elected a delegate to the Continental Congress on 4 Feb. 1779; he was reelected on 30 Apr. 1780 and 12 July 1781. After attending sessions during 15 Apr.–8 Dec. 1779 and 4 Oct. 1780–1 Oct. 1781, he resigned from the Congress, which he called a "house of bondage," on 20 Dec. 1781. While a delegate he opposed the wholesale cession of western lands and advocated increased Continental support of the war in the South. When the British army under Lord Charles Cornwallis invaded the backcountry, Sharpe proposed that the Americans launch an attack from the sea in order to force a British withdrawal from the interior.

When he resigned his seat in Congress, Sharpe informed Governor Alexander Martin that this action was caused by the "derranged condition of my estate." However, this did not prevent him from serving the following year, 1782, in the North Carolina House of Commons. At this session he served as spokesman for the committee that found the western land claims of the Transylvania Company illegal. He also was an unsuccessful candidate for the offices of governor and comptroller. Again in the house the following year, he was disappointed in his bid for a seat on the Council of State. Serving in the 1784 House of Commons, Sharpe supported the repeal of the Tennessee Cession, as well as legislation against former Tories. It was at this session that he introduced an unsuccessful bill for "Establishing the North Carolina University." A similar bill introduced by William R. Davie was passed in 1789. After 1784 Sharpe held no elected office, although there was an attempt to return him to Congress in 1786. Evidence seems to indicate that his health declined. He was unable to attend the laying of the cornerstone of The University of North Carolina in 1793. In commenting on his "ambitious friend, Billy Sharpe," Davie noted: "He was ever eager to serve, but being no Verulam, seems better suited to make a treaty with the savages in the Western Woods than to set afoot a seminary of learning."