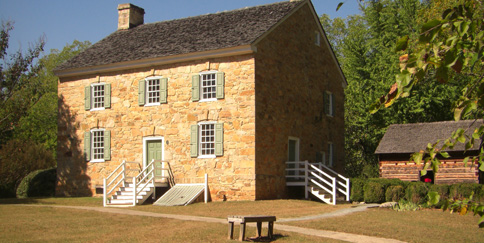 Hezekiah Alexander, Revolutionary statesman, was born in Cecil County, Md., of Scotch-Irish ancestry. His grandfather, Joseph Alexander, a tanner, is thought to be one of seven brothers who migrated to Somerset County, Md., sometime prior to 1670. His father, James Alexander, moved to Cecil County where he became a magistrate and an elder in the Presbyterian church. His mother, Margaret McKnitt, the daughter of John McKnitt and Jane Wallace, was James Alexander's first wife.

A member of a large family, Hezekiah Alexander learned the blacksmith's trade and then moved to Cumberland (now Franklin) County on the Pennsylvania frontier. On 12 June 1752 he married Mary Sample; they settled on a small tract purchased the previous year. When the outbreak of the French and Indian War opened the area to severe Indian attacks, Alexander's family was forced to flee. By 1764 Alexander was buying land near the Catawba River in Piedmont, North Carolina, an area where many of his relatives had settled. He rose to become, with Thomas Polk, one of the most influential men in Mecklenburg County. He was an elder of the Sugar Creek Presbyterian Church, where preached the fiery Alexander Craighead. In 1768 Governor William Tryon appointed him a county magistrate. Three years later, as treasurer and trustee, he played a prominent part in the creation of Queens College, the first college chartered south of Virginia and the only school for the training of Presbyterian ministers south of Nassau Hall in New Jersey.

From the first, the largely Presbyterian settlers of Mecklenburg were at odds with the Crown. They opposed the land claims of Governor Arthur Dobbs and George Selwyn in "the war of Sugar Creek." Also deeply resented were laws placing restrictions on Presbyterian ministers and taxing the inhabitants for the support of the Anglican church. A petition to the governor in 1769 warned that there were in the county over a thousand members of the Church of Scotland "able to bear arms," who "shall ever be more ready to support that government under which they find the most liberty." The levying of new restrictions on America by Parliament and the king's veto of the Queens College charter in 1773 led Alexander to give his support to the actions of the Continental Congress and to become a member of Mecklenburg's Committee of Safety. An effective public speaker, he was active in a series of public meetings held by the committee during the winter and spring of 1774–75. Following the outbreak of fighting at Lexington, he took part in the adoption of the Mecklenburg Resolves of May 31, 1775, which declared all British laws and authority to be henceforth null and void. The royal governor wrote England that these were the most "treasonable publications" that "this continent have yet produced." Captain James Jack, who carried a copy of the resolves to the North Carolina delegation in Congress, later remembered Hezekiah as chairman of that May meeting; others thought it might have been Abraham or Adam Alexander, who were his cousins. Chairman or not, he played a major role in bringing about the break with Great Britain.

In September the Patriots organized a council and six District Committees of Safety to oversee the town and county committees of the province, and named Hezekiah Alexander to the Salisbury district committee. In December of 1775 this committee sent a military expedition to western South Carolina, which crushed the Scovellite Tories there. Alexander outfitted and supplied the expedition as its commissary. In May 1776, when the district committees were abolished and virtual dictatorial powers were given to the council, he was selected to be one of its thirteen members. With his colleagues in this office, he saw to the raising, provisioning, and financing of the patriot forces, served as the highest judicial body, and determined civilian and military policy in the province. The Tory threat in the east was suppressed by the Battle of Moore's Creek Bridge, and an expedition sent against the Cherokees ended that threat to the west. The actions taken by the council in these first years of conflict were crucial in determining the success of the Revolution in North Carolina.

Following the Declaration of Independence, the council called for a congress to meet at Halifax in November to establish a permanent government for the state. Hezekiah was subsequently elected a delegate to this congress. He was a champion of the democratic forces in Mecklenburg, against the conservatives led by Thomas Polk. In all his actions, his chief lieutenants were Waightstill Avery, an attorney who boarded in his home, and Alexander's younger brother, John McKnitt Alexander. At Halifax, because of his council reputation, he was placed on the committees that drafted the bill of rights and the constitution. His influence helped make the North Carolina constitution, second only to Pennsylvania's, the most democratic of those then drawn.

With this, his major work, accomplished, his remaining years were spent in Mecklenburg with his family of seven sons and three daughters. He continued to play a leading role in the affairs of his church and served wisely and conscientiously as county magistrate until 1794. His stone house still stands in Charlotte and he was buried in the cemetery of the Sugar Creek Presbyterian Church.

Hezekiah Alexander is listed on the roster of George Washington's army at Valley Forge.