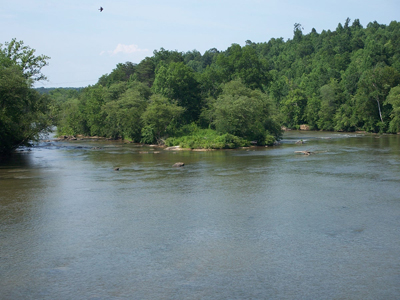 Yadkin–Pee Dee River rises as the Yadkin River in Watauga County near the town of Blowing Rock and flows southeast through Caldwell County; it turns northeast and flows through Wilkes County and along the Surry-Yadkin, Davidson-Rowan, Davie-Forsyth, Yadkin-Forsyth, Davie-Davidson County lines, and part of the Montgomery-Stanly County line. It joins the Uwharrie River in Montgomery County to form the Pee Dee River. The Pee Dee River then travels along the Stanly- Montgomery and Anson-Richmond County lines into South Carolina, where it drains into Winyah Bay

The Yadkin River has been the site of human civilization for at least 12,000 years, earning it the nickname of the ‘‘Tigris and Euphrates of the Carolinas.’’ It was formerly called the Sapona River, after the peoples who originally inhabited its banks, until the name was changed between 1709 and 1733. The origin of the word ‘‘Yadkin’’ is unknown; different spellings appeared throughout the eighteenth century, including ‘‘Yatkin,’’ ‘‘Atkin,’’ and ‘‘Reaktin.’’ The name ‘‘Pee Dee’’ probably came from either the Catawba Indian word pi’ri (something good) or pfhere (smart, expert, or capable).

The size of the Yadkin–Pee Dee’s North Carolina watershed is 7,213 square miles, and the river is 435 miles long. There are 81 North Carolina municipalities within its river basin, including Wilkesboro, Salisbury, and Lexington. In the early 2000s the area had a population of more than 1.2 million. The river has experienced various environmental problems, most notably a huge amount of sediment generated by the farmland erosion along its banks. Various soil-conservation plans have begun to solve some of the river’s sediment problems, as scientists continue to study both that issue and others affecting the Yadkin’s water quality and overall health.

Hairr, John. 2011. "The Yadkin River near Rockford in Surry County."

Are there any records of land

Are there any records of land owner on yadkin river in 1600 or early 1700 hundreds. Am looking for name of Brown. Would have been near what is now East Bend or Yadkinville, NC.

The area that is present-day Yadkin County wasn't really settled until the mid 1700s. First settlers generally came from further east in North Carolina. Land purchases for the area back then would have been in the form of land grants from the Lords Proprietors, specially from Lord Granville's district. https://www.ncpedia.org/granville-grant-and-district

I have a few sources that can help you with your research.

Hello, I am an avid kayaker

Hello, I am an avid kayaker and steward of the river and its tributaries, mainly in North Carolina. Of the stakeholders you mention, do you have any data that reflects the impacts of these activities on water quality within the Yadkin Pee Dee basin?

Thanks for visiting NCpedia. I am forwarding your question to our reference team.

What is the stream flow feet

What is the stream flow feet per second or depth.

That is a fascinating

That is a fascinating question! I found this from the USGS website: https://waterdata.usgs.gov/nwis/uv?site_no=02115360

I hope that helps!

What is the water usage in

What is the water usage in the Yadkin Pee Dee River basin?

Thank you for visiting NCpedia. You have an excellent question! The closest I can come to answering it is to share a site from the US Geological Survey site on Water use by county 2015. You can zero in on the state and then hover over the county for the data to appear. I hope this helps.

What are some very

What are some very interesting facts about the Yadkin-Pee Dee River Basin?