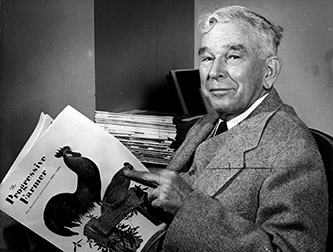 Clarence Hamilton Poe, editor, publisher, and author, was born on his father's small cotton farm near the town of Gulf, Chatham County, the only son of William Baxter (1839–1907) and Susan Dismukes Poe (1846–1911). Prominent in the maternal ancestry was Augustine Shepperd (1792–1864), of Surry and Forsyth counties, who served nine terms in Congress between 1827 and 1851, in the later years as a Whig.

What little formal education Poe received was chiefly in a one-room country school known as Rocky Branch School, which was in operation three to four months of each year, plus one year of high school in Greensboro. However, he read eagerly and was encouraged by his mother, a former teacher, to develop his talent for writing. At age sixteen he went to Raleigh to work as associate editor for the Progressive Farmer, a weekly paper that had been founded in Winston in 1886 by Colonel Leonidas Lafayette Polk. Poe became editor on 4 July 1899. In 1903 he purchased the paper and together with Dr. B. W. Kilgore, Josiah William Bailey, Dr. C. W. Burkett, and T. B. Parker organized the Agricultural Publishing Company, the name of which was later changed to the Progressive Farmer Company. Poe served as president from the firm's inception until January 1954, after which he served as senior editor and board chairman until his death. The headquarters of the company were moved to Birmingham, Ala., in 1911, but Poe continued to direct its operations from his Raleigh office. Between 1903 and 1930, fourteen other farm papers were bought or merged into Progressive Farmer ; its circulation expanded from 5,000 to 1,400,000, and Progressive Farmer became the dominant farm publication in the South and one of the strongest in the United States.

The great variety of his interests is indicated by other numerous activities and awards. He was president of the State Press Association (1913–14), North Carolina Conference for Social Service (1913–15), and State Literary and Historical Association (1914–15). In 1925–64 he was an elector of the Hall of Fame; in 1926–60, director of the North Carolina State Art Society (also part-time chairman of its executive committee); and in 1933–35, head of the North Carolina Rural Electrification Authority. He was a member of the Raleigh Board of Managers of the Wachovia Bank and Trust Company (1924–33), Commission to Draft a Revision of the State Constitution (1931–32), State Planning Board (1935), National Advisory Committee of National Youth Administration (1935–43), National Committee on Hospital Care (1944–46), North Carolina Hospital and Medical Care Commission (1944–55 [vice-chairman, 1945–55]), Jackson-Johnson-Polk Monument Commission (1947–48), Commission on Health Needs of the Nation (1951–52), International Development Advisory Board (known as the Rockefeller Commission, 1951–55), State Art Commission (1951–61), and State Commission on Racial Segregation in the Schools (1954–55). In addition, he was chairman of the State Committee that secured ratification of five constitutional amendments (1936), National Advisory Committee on Rural Electrification (1936), and Southern Governors' Campaign for Balanced Prosperity in the South (1940–43).

Goldsboro editor Henry Belk said: "If one were asked to name the North Carolinian who has made the greatest contribution to progress and enlightenment, to education and health and improved living, most would name Dr. Poe." Similarly, Virginius Dabney, Richmond, Va., editor, observed: "If a list were drawn up of the half-dozen men who have done most for the South since 1900, it would have to include Dr. Clarence Poe."

He married, in Raleigh on 29 May 1912, Alice Varina, daughter of Charles B. Aycock, former governor of North Carolina (1901–5). They had three children: Charles Aycock, Raleigh attorney; William D., edition editor of the Progressive Farmer (d. 1958); and Jean Shepperd, who married Gordon Smith, Jr. Clarence Poe had one sister, Daisy Poe Moore, of Gulf. He died in Raleigh at age eighty-three, still writing his column for the Progressive Farmer and working on his eighth book.