Agriculture and Consumer Services, Department of 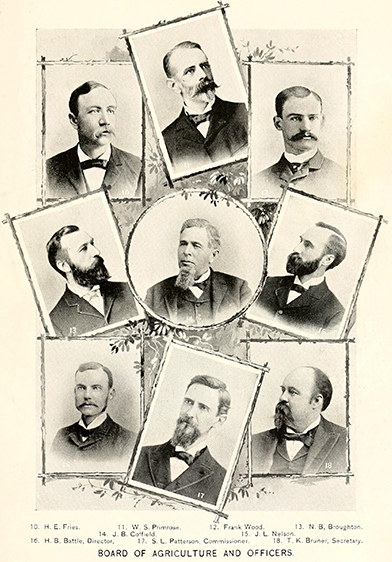 As early as 1860, North Carolina governor John W. Ellis urged the General Assembly to set up a board of agriculture. Legislators ignored the request because of their concern over the impending Civil War. The foundation for establishing an agriculture department was laid in the state constitution of 1868, which called for the creation of a Bureau of Statistics, Agriculture, and Immigration within the office of the secretary of state. But this agency did not provide for the real needs of agriculture and failed to satisfy farmers, who wanted an independent department.

At a state constitutional convention in 1875, the General Assembly was charged with organizing a Department of Agriculture, Immigration, and Statistics "under such regulations as may best promote the agricultural interests of the State and shall enact laws for the adequate protection and encouragement of sheep husbandry." The legislature did so in March 1877, when it also created a Board of Agriculture to supervise the new department's activities. Col. Leonidas LaFayette Polk, who had been instrumental in the department's formation, was named the first commissioner of agriculture on 2 Apr. 1877. Polk is well remembered as founder in 1886 of the Progressive Farmer, which sought to teach farmers better agricultural methods and urged them to form clubs to increase their political influence. Through these farmers' clubs, Polk secured the establishment in 1887 of a state college of agriculture, the modern North Carolina State University in Raleigh.

The position of commissioner of agriculture became an elected office in 1899. Through the decades, the state's Agriculture Department-the modern Department of Agriculture and Consumer Services-expanded its services to meet a wide variety of agricultural needs. By the early 2000s it consisted of 15 divisions, including Agricultural Statistics, Agronomic Services, Aquaculture and Natural Resources, Food Distribution, Food and Drug Protection, Human Resources, Livestock Marketing, Structural Pest Control, and Veterinary Services. The Agriculture Department also oversees the annual North Carolina State Fair in Raleigh. Employing about 1,400 people, it holds broad responsibilities for regulating public health, safety, and welfare as well as for protecting, maintaining, and enhancing agriculture in the state.