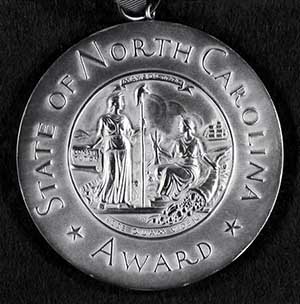 The North Carolina Awards are the highest civilian honor given by the state. Established by the General Assembly in 1961, they were first conferred in May 1964 and have been granted annually since then. State senator Robert Lee Humber of Pitt County (1898-1970) conceived the awards to recognize the superior achievements of North Carolinians in science, literature, the fine arts, and public service, as well as of one North Carolinian living outside the state who had been distinguished in one of the areas. Humber hoped that the awards would inspire others to excel in their chosen fields.

Shortly before his death, eminent American sculptor Paul Manship produced the design for the 2 ¾-inch diameter 14-caret gold medal presented to every recipient. Sculpted on the front in bas-relief is the Great Seal of North Carolina with the words "State of North Carolina Award" around the border. On the reverse are two scrolls, the first located in the center of the medal, inscribed with the name of the recipient and the date of the award and surrounded by a wreath. The second scroll is on the lower margin below the wreath and inscribed with the field for which the recipient is recognized. Encircling the central scroll and wreath along the outer margin is the motto Humber penned for this medal: "Achievement Is Man's Mark of Greatness."