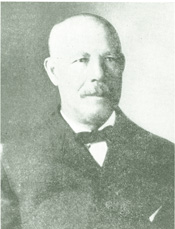 James Edward O'Hara, congressman, Halifax county commissioner, black politician, educator, and lawyer, was born in New York City, the son of an Irish seaman and a West Indian woman. At age six, he moved with his parents to the West Indies. It is said that he was a resident of St. Croix, Virgin Islands (at the time a Danish possession), St. Thomas, Virgin Islands, and Jamaica. Eventually, he returned to New York and, in the fall of 1862, accompanied a group of missionaries to eastern North Carolina, then occupied by Federal troops at the onset of the Civil War.

Having studied law at Howard University in Washington, D.C., O'Hara was admitted to the bar in 1873, and he immediately established a busy practice in Enfield, Halifax County. Throughout Reconstruction, he was active in Republican party politics in North Carolina. He became a member of the Halifax County Board of Commissioners, serving as chairman from 1872 to 1876.

Halifax County was a part of the Second Congressional District, which became known as the "Black Second" because of the large Black population in that part of eastern North Carolina. In 1874 O'Hara failed to win his party's nomination for the congressional seat from the Black Second, which went to John Adams Hyman, North Carolina's first black congressman. This defeat was offset the following year, when O'Hara was chosen to represent Halifax County in the North Carolina Constitutional Convention of 1875. During the convention, he opposed Conservative party efforts to discontinue popular elections at the county level.

With the new constitution preventing local popular elections, O'Hara had no chance to regain his position on the Halifax County Board of Commissioners. This setback led him once again to seek the Republican nomination for the Second District's congressional seat. After winning the nomination in 1878, he was defeated in a contested election by Conservative William Hodge (Cap'n Buck) Kitchin of Scotland Neck. Although he failed to receive his party's nomination in 1880, O'Hara finally won the Black Second congressional seat in 1882. The opposition Democrats had not placed a candidate in the field, hoping to widen the Republican party's factional differences by allowing the Republicans to fight it out among themselves. Moreover, infighting growing out of the state Prohibition campaign of 1881 had weakened the Democrats. O'Hara had backed the anti-Prohibitionists' cause, a stand that strengthened his support among black voters.

O'Hara was the second black to represent North Carolina in the U.S. House of Representatives, serving in the Forty-eighth and Forty-ninth Congresses (1883–87). Unlike Hyman, who preceded him, O'Hara was an extremely active and capable congressman during both his terms. He was an untiring worker, especially in behalf of his North Carolina constituents—black and white. O'Hara sought appropriations for the improvement of waterways and roads, public education, animal husbandry, and public buildings in his state and district. As a member of the House Committee on Invalid Persons, he worked to obtain appropriations for the relief of Civil War victims, both veterans and their relatives, and sought to alleviate the sufferings of Blacks in the aftermath of the war. In matters pertaining to his race, he attempted to obtain equal rights for blacks in public places and equal accommodations in public transportation. O'Hara's votes in Congress reflected, for the most part, an unbiased and intelligent consideration for the betterment of his nation, his state, and his district. He did not appear to allow party politics to hold sway over his principles.

Having won his second term in Congress by defeating Democrat Frederick A. Woodard of Wilson County, O'Hara failed to garner the necessary votes in his third attempt, losing to Democrat Furnifold M. Simmons of Craven County in 1886. Simmons took advantage of existing divisions among the Republicans, who had held two conventions and nominated two candidates: O'Hara and Israel B. Abbott, another black. An ugly racial contest developed when Abbott, claiming to be a pure-blooded Negro, questioned O'Hara's right to represent his race in view of his mixed blood. O'Hara tactfully refrained to respond, but the opposition Democrats seized upon the split among the Republicans and won the election.

Throughout the congressional campaign of 1888, O'Hara actively supported George Allen Mebane, a black, who ran against the successful Republican candidate, Henry Plummer Cheatham. Cheatham, who became North Carolina's third black congressman, was accused of having close ties with the Democrats, whereas O'Hara strongly favored a "pure" Republican party. In the 1890s he adamantly opposed the Fusionist movement, when the new Populist party joined forces with the Republicans.

From the time O'Hara entered public life, he urged his fellow blacks to obtain a good education. At political meetings, fairs, and other public gatherings, he continually stressed the need for better teachers and public schools to assist blacks in rising above a servile status. He deplored the fact that North Carolina lacked good teachers, believing that this was one of the chief reasons for the backwardness of the state's educational system. His interest in education extended beyond public schools, for he was among the first of his race to advocate a state university for blacks in North Carolina.

On leaving Congress, O'Hara returned to his law practice in Enfield. After 1890 he moved with his wife, the former Elizabeth E. Harris, to New Bern. There his son, Raphael, joined his law firm. New Bern remained O'Hara's residence until his death.

Journal of the Constitutional Convention of the State of North Carolina at Its Session of 1868 (1868).

Journal of the Constitutional Convention of the State of North Carolina Held in 1875 (1875).

Benjamin Perley Poore, comp., The Political Register and Congressional Directory: A Statistical Record of the Federal Official, Legislative, Executive, and Judicial, of the United States of America (1887). https://archive.org/details/politicalregist01poorgoog (accessed August 8, 2014).