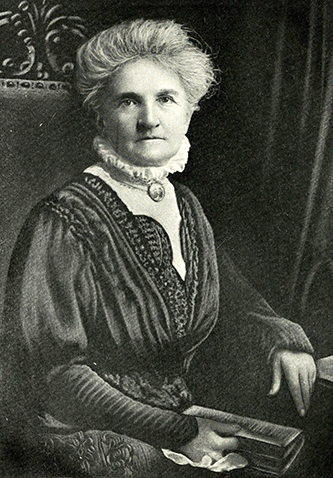 Elvira Worth Jackson Walker Moffitt, patriot, club member, editor, and writer, was born in Asheboro, the daughter of Martitia Daniel and Jonathan Worth, who later became state treasurer and then governor of North Carolina. On her father's side, she was descended from English Quakers who had settled on Nantucket Island, Mass., in 1665. Her mother, a native of Virginia, was the niece of Judge Archibald D. Murphey of Hillsborough. Jonathan Worth met his bride while reading law under Murphey. Elvira grew up in Asheboro and was educated by young ladies from New England who taught in the Randolph Female Academy, founded by her father and four other men in 1839. She later attended the Edgeworth Seminary in Greensboro.

She married Samuel Spencer Jackson of Pittsboro while he was studying law in Chapel Hill and tutoring in Greek at The University of North Carolina, from which he had been graduated in 1854. On completion of his law studies, the young couple settled in Asheboro where he joined his father-in-law in the practice of law.

Although her father worked diligently to keep North Carolina in the Union, when the Civil War began Elvira plunged wholeheartedly into the war effort. Together with other women of the town, she helped sew tents and articles of clothing from material manufactured by the cotton mills along Deep River. This was merely the first of three wars in which she was active—during the Spanish-American War she helped to establish the Soldiers' Aid Society in Raleigh, and during World War I she was a leader in the War Relief Society of Richmond, Va.

When her husband died in 1875, Mrs. Jackson was left with a ten-year-old son, Herbert Worth. Two years later she married Samuel Walker, a leading merchant of Asheboro, but after only four months she was again a widow. Six years later Eli Moffitt, a prosperous farmer of Moore County, became her third husband. After his death in 1889 she moved to Raleigh to make a home with her only son, who was a founder and chief officer of the Commercial National Bank of Raleigh. A young newspaper editor, Josephus Daniels, had married her niece, Addie Worth Bagley, and for a time this young couple lived with Elvira and her son.

In Raleigh she was able to give full rein to her patriotic fervor. She affiliated with the Daughters of the Revolution, becoming state regent for the years 1906–10; on her retirement, she was named honorary state regent for life. During the twenty years that the society published the North Carolina Booklet, she was either coeditor, biographical editor, or a member of the advisory committee as well as a prolific contributor to its pages. An early member of the North Carolina Literary and Historical Association, she served as vice-president in 1909. The Johnston-Pettigrew Chapter of the United Daughters of the Confederacy made her its honorary president for life. She organized the Wake County School Betterment Association and was a charter member and first contributor to the State Confederate Monument Society. In 1903 she organized a group of women, called St. Luke's Circle of King's Daughters, to aid infirm and indigent sick and to found St. Luke's Home. She was an active member of the Roanoke Colony Memorial Association and was instrumental in securing a congressional appropriation for a painting of the baptism of Virginia Dare for installation in the capitol.

As the founder of the Woman's Club of Raleigh, she was made a life member at a subsequent anniversary dinner held in her honor. She wrote a history of the club movement in North Carolina, which was placed in the cornerstone of the Woman's Club's new building, erected in 1915. As an organizer of the North Carolina Peace Society, she was twice appointed, by two governors, to represent the state at the national meeting. The Stanhope Pullen Memorial Association owed its existence primarily to her efforts, and the Stanhope Pullen Gate, which stands at the entrance to the grounds of North Carolina State University, was one of her projects. Further, she was instrumental in having a bronze tablet to "Ladies of the Edenton Tea Party—1774" placed in the rotunda of the state capitol.

In 1909, when her son, Herbert Worth Jackson, was made president of the prestigious Virginia Trust Company, she followed him to Richmond and lived in his home on West Franklin Street for the remainder of her life. She was immediately invited to become a member of the Association for the Preservation of Virginia Antiquities. Elvira Moffitt personally launched the movement to organize the Matthew Fontaine Maury Memorial Association of Richmond, and a few months before her death she was asked to preside at the unveiling of a monument in Richmond to America's first and foremost oceanographer. She also worked successfully for the installation of a memorial window in the Old Blandford Church, Petersburg, Va., to commemorate the 23,000 Confederate dead who were buried there.

Her native Asheboro was never far from her thoughts. After World War I she bombarded the local newspaper and its editor, Congressman William C. Hammer, with a continuing stream of letters urging that a public library be built as a memorial to the soldiers of Randolph County who had served in that conflict.

Mrs. Moffitt died in her home in Richmond at age ninety-four. Her funeral was conducted at the First Presbyterian Church, Raleigh, and she was buried in Oakwood Cemetery.