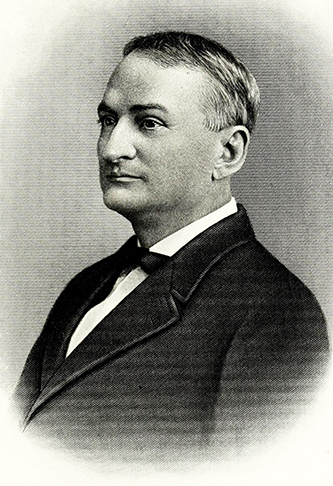 Herbert Worth Jackson, banker and civic leader, was born in Asheboro, the son of Elvira Evelina Worth and Samuel Spencer Jackson, a lawyer. Among his forebears were Judge John Alston, who came to North Carolina in 1694 with Governor John Archdale, and Judge Samuel Spencer, a member of the First Provincial Congress held in New Bern in 1774 and of later congresses held at Hillsborough and Halifax. His maternal grandfather, Jonathan Worth, was governor of North Carolina during Reconstruction. His mother served as president of the North Carolina Division of the Daughters of the American Revolution and as co-editor of The North Carolina Booklet, a quarterly historical publication. His father died when he was ten, and his mother remarried twice and was widowed three times by 1886.

Jackson received his elementary education under a private tutor in Asheboro before entering Bingham Military School at Mebane in 1877. Six years later he enrolled in The University of North Carolina, where he became first baseman and captain of the varsity baseball team and excelled as a kicker in the not yet widespread game of football; he also held membership in Alpha Tau Omega. He was awarded the bachelor of philosophy degree in 1886. The following year his financial career began with an appointment as clerk in the treasury department of the state of North Carolina. Three years later he became treasurer of the Wetmore Shoe and Leather Company. In 1891 Jackson was named assistant cashier of the Commercial and Farmers Bank (later Commercial National Bank) of Raleigh. In 1906 he was promoted to cashier, and while in this position was elected president of the North Carolina Bankers Association for the term 1908–9.

In 1909 Jackson was appointed president of the Virginia Trust Company of Richmond, Va. Founded in 1892, this was the first trust company in Virginia and one of the first in the South. When he became president the business was small, with capital stock of $500,000, deposits of $120,000, and trust assets of $600,000. Jackson's imaginative advertisements offering financial advice seem to have contributed to the success of the company, which at the time of his death had increased its capital stock to $1 million, its resources to $8 million, and its trust assets to an aggregate of $50 million.

Over the years Jackson was a member of the Richmond Clearing House Association (president, 1935–36), Virginia Bankers Association, and American Bankers Association. He served on the board of directors of the Raleigh Standard Gas Company, Jefferson Standard Life Insurance Company, Atlantic Fire Insurance Company, Virginia Electric and Power Company, Johnson Publishing Company, Tredegar Iron Works, and Aberdeen and Rockfish Railroad of which he was chairman of the board. He also served as secretary and treasurer of the News and Observer Publishing Company, owned by his cousin-in-law, Josephus Daniels.

Early in life Jackson demonstrated an interest in history. In Raleigh he served as treasurer of the North Carolina Society of the Sons of the Revolution and in Richmond as president of the parallel organization in Virginia. He also held membership in the Virginia Society of Colonial Wars, of which he became deputy governor and later governor. Through his influence, the General Society of Colonial Wars donated a gate, a gatehouse, and tablets to Stratford, the home of the distinguished family of Robert E. Lee. He was instrumental in having some silver pieces bearing the Lee coat of arms obtained and returned to the home. In addition, Jackson was a member of the Society of the Cincinnati and of the Confederate Memorial Literary Society, and served on the board of directors of the Stone Mountain Confederate Monumental Association and of the Richmond Battlefield Parks Corporation.

While living in Raleigh, he was elected to the board of trustees of The University of North Carolina. He also served on the boards of Peace College in Raleigh, Union Theological Seminary, and Hampden-Sydney College.

Throughout his life Jackson participated in many community projects. In Raleigh, he helped organize the YMCA and served as an alderman, a member of the public school committee, and a member of the Municipal Building Commission. After moving to Richmond, he conceived the idea of the Richmond Foundation, founded by him and others in 1919 as a public trust fund. This trust, derived from gifts from civic-minded citizens, was to be used for charitable, educational, and benevolent purposes for the people of Richmond and the state of Virginia.

During World War I, he served as chairman of the Richmond Victory Loan Campaign in which Richmonders made more than $15 million available for the war effort. He also volunteered his services as a member of the board of directors of the Sheltering Arms Hospital, the Richmond Home for Ladies, and the Retreat of the Sick Hospital. From 1928 to 1936 he was president of the Richmond Police Benevolent Association, a charitable organization.

On 22 Oct. 1890, in Tarboro, N.C., Jackson married Annie Hyman Philips, the daughter of Frederick Philips who was a judge of the North Carolina Superior Court. They had three children: Evelyn Hyman, Herbert Worth, Jr., and Samuel Spencer.

At age seventy-one Jackson died from a heart attack at his home in Richmond; he was buried in Oakwood Cemetery, Raleigh. More than twenty newspapers featured articles about his passing. His will specified funds for five Richmond charities. In 1938 the president of The University of North Carolina announced that his widow had endowed the Herbert Worth Jackson Scholarship as a memorial to him. Portraits of Jackson hang in the boardroom of the Virginia Trust Company and in the homes of Herbert Worth Jackson III and Samuel Spencer Jackson.