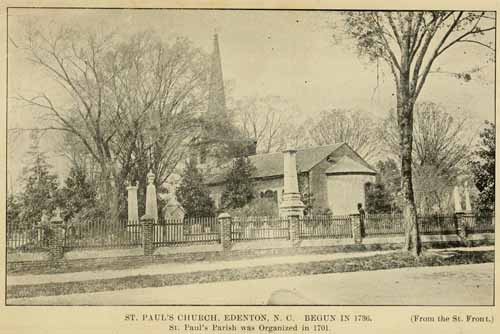 John Alston, early settler, is remembered more as the progenitor of a family whose members have played significant political and social roles in North Carolina than as an important figure in his own right. He was born in Bedfordshire, England, where his family in 1640 had acquired the castle at Odell, after having been seated at Saxham Hall in Norfolk since the Middle Ages. The founder of the North Carolina Alstons was the third in succession to bear the name John; the founder of the South Carolina family, another John Alston, was his first cousin. John of North Carolina was the son of Ann, daughter of the celebrated John Wallis, Savilian professor of geometry and archivist of Oxford University. John Alston was baptized on 5 Dec. 1673 in the parish church at Felmersham, a village that lies almost in sight of Odell and Pavenham, the other two Bedford villages closely associated with the Alstons.

Alston may have emigrated to the West Indies or possibly to South Carolina before moving to Virginia, whence he entered North Carolina; he was thirty-eight years old when his name first appeared in the Albemarle Book of Warrants and Surveys in 1711, at which time he was named as grantee of land on the northwest side of Bennett's Creek in that part of Chowan (now Gates) County that lay in the territory in dispute between Virginia and North Carolina. Unlike other settlers in this area, Alston does not appear in the fragmentary records of Nansemond, the adjacent Virginia county. William Byrd, in his account of surveying the dividing line between the two colonies in 1728, mentioned dining with Major Alston at the home of Thomas Speight in Perquimans on 19 Mar. 1728. On 24 Mar. he wrote: "This being Sunday the People flock't from all parts partly out of Curiosity, & partly out of Devotion. Among the Female part of our Congregation, there was not much Beauty, the most fell to Majr. Alston's daughter, who is said to be no niggard of it. . . . Major Alston & Captain Baker dined with us. . . . "

From 1711 throughout the remaining forty-seven years of his life, John Alston continued to acquire and to assist his children to acquire land in the expanding areas of Bertie, Edgecombe, Granville, and Orange. Like his sons, he seems consciously to have determined to establish his descendants as landholders. In much the same pattern, Alston held public positions comparable to those his family had held at home; in 1720 he became a justice of the peace for Chowan, continuing in that post until he was commissioned assistant justice of the court of oyer and terminer in 1724, in which office he served for five years. In 1725 he became collector of revenue for the colony. In 1738 Alston was elected to the vestry of St. Paul's Parish, Edenton; he continued as a vestryman until he was named sheriff in Chowan in 1746 at the age of seventy-three. In the colonial militia, Alston is recorded as captain before 1724; in 1725 he became a major; and in 1729 he was designated colonel.

About 1700, John Alston was married to Mary, daughter of John Clark of Pasquotank and cousin of Chief Justice John Palin. His wife's Quaker ancestry may account for the biblical names found among the early North Carolina Alstons, names not so prevalent among their South Carolina kinsmen. The list of John and Mary Clark Alston's children and their places of residence illustrates how the children of settlers in the Albemarle quickly expanded their land holdings and moved to developing areas inland: Joseph John (ca. 1702–81) of Edgecombe (later Halifax) County; Mary, who married first Henry Guston of Bertie County and second William Seward of Isle of Wight County, Va.; Solomon (ca. 1707–84) of Bute (later Warren) County; Sarah (b. ca. 1709), who married Thomas Kearney of Edgecombe (later Halifax) County; Elizabeth (b. ca. 1711) married to Samuel Williams of Edgecombe County; William (ca. 1714–ca. 1743) of Edgecombe County; Charity (b. ca. 1718), who married first Robert Hilliard and second John Dawson, both of Northampton County; Philip (ca. 1723–83) of Bute (later Warren) County; James (d. 1761) of Orange County; and Martha, married to Lemuel Wilson of Norfolk County, Va.

Unlike many of the early colonists, John Alston lived a long life, surviving two of his children. On 17 Sept. 1754, at the age of eighty-one, he began writing his will; he finished and dated it 20 Feb. 1755. Three years later he died at his residence on Bennet's Creek; his will was probated in Chowan County.

Joseph A. Groves, The Alstons and Allstons of North and South Carolina (1901). https://archive.org/details/alstonsallstonso03grov.

The Alstons and Allstons of North and South Carolina; (1901), The Internet Archive: https://archive.org/stream/alstonsallstonso03grov#page/n7/mode/2up

In 1738 Alston served on the vestry of St. Paul's Parish. From the Internet Archive. Available from https://archive.org/stream/alstonsallstonso03grov#page/n7/mode/2up (accessed January 8, 2013).

I am looking into a ms.

I am looking into a ms. journal kept by a John A Alston crossing from Boston to Liverpool on the packet ship Mary Ann in December 1847. Related to any of you?

There is a village called

There is a village called "Alston" a few miles from the Scottish border in England and just over the border a few miles north is the village "Gretna Green." John Alston in Halifax Co. NC named his plantation "Gretna Green." This tells me the NC John Alston was most likely from northern England near the Scottish border where soldiers for the Monmouth Rebellion were recruited. No other research from anyone has been proved to be the family from which the NC John Alston came. See Complete Book of Emigrants in Bondage by Peter Coldham p. 12 "John Alston Rebel T (transported) 1685." My research fits the description of John Alston of NC . He did not discuss his early life with his family evidently or they did not discuss it later. Being a rebel, even though he was pardoned and could go back to England, he chose to come to America with other rebels named Williams and Dawson. families his children married with.

Thank you Mr. Forest King. The background of the Alston family in Alstons and Alstons of North and South Carollina is entirely incorrect based on later research. and Mr. King is correct. No one knows the background of John Alston of Halifax Co. NC. Gretna Green, the name of his home in NC is the same as a a village just across the Scottish border from Northern England. This is a vital clue as to where the NC John came from. This researcher believes that he was the John Alston of the Monmouth Rebellion. See Complete Book of Emigrants by Peter Coldham 1661-1699 pp. 548, 616

Hi. I am curious if this is

Hi. I am curious if this is the same John Alston who had a daughter named Ann born around 1686 who married John Clark? If so Ann Alston Clark is my 7x great grandmother. I would love some help finding out more.
Thanks a million and God Bless,
Ashley

Thank you for using NCpedia and taking the time to ask this question!

I'm not sure if this is the John Alston you're looking for, but I will forward your question to the reference staff at the Government & Heritage Library, via email. They will contact you soon to help with your research.

Hello I'm fairly young new to the research of my families name and history, and wanted to see if by chance this, in fact is my family tree.
I was born 10/30/1986 in Union, New Jersey to my father Warren Binag Alston (06/11/1967)and mother Regina Renee (Alston) Walker.
My Grandfather was named Robert (?) Alston
And I recently learned his grandparents were named John Alston and Daisy Alston from North Carolina.
He specifically mentioned Warrenton County as a place where a lot of our relatives are from.
I also have a blood sister, Kandrisa Alston (03/01/1988) born in New Jersey as well and recently moved to Edinburgh, UK for school.
Any information would be appreciated.

Thanks for visiting NCpedi and taking time to share your family history.

Unfortunately, we are not able to conduct genealogy research for vistors.  However, I can suggest resources for you to get started on your own to see if John Alston is in your family tree.

Please visit the Genealogy page on the website of the N.C. Govt. & Heritage Library -- http://statelibrary.ncdcr.gov/ghl/resources/genealogy.html.  You'll find helpful information for getting started with family history research.

One of the resources listed for this article, The Alstons and Allstons of North and South Carolina, is available online.  Here is the link https://archive.org/details/alstonsallstonso03grov.  You may find some useful information.

Many public libraries subscribe to Ancestry.com (and other family history search databases).  You may want to visit your local public library to see if they subscribe.  Public librarians can also help with genealogy research.

Finally, if you are located near Raleigh, N.C., the N.C. Government & Heritage Library is open 6 days a week with resources (including access to Ancestry.com) and librarians who can help you locate resources for your research.  Here is a link to the "About" page on the library's website where you'll find more info abou the library's collections and services -- http://statelibrary.ncdcr.gov/about.html.

I hope this helps!  Please feel free to post back here if you have additional questions.

The John Alston christened on

I live on a farm located in

I live on a farm located in johnston county NC. My sons recently found a tombstone and the only part legible is a name Abeth D Alston and part of a date --18. We are very curious about this, this farm has been in our Vinson family for many many years. I have done some research and can not find any Alston family in Johnston County. Thank you for any information.

Thanks to Forest King for

Thanks to Forest King for posting that info about the John Alston origins. I was contacted over a year ago by a researcher in England who had found the info about the John Alston given by Groves as the ancestor of the NC families and I'm glad the info is getting around to the general public.
Additionally I want to add is that I look at the births of some of his children a bit skeptically, in particular for daughter Elizabeth Alston, listed as b. ca 1711. The youngest son of Samuel Williams & Elizabeth Alston, Joseph John Williams, d. 1818 Halifax Co, and his obituary reads he was 91 years old, making his birth as ca 1727. Since there were 3 other sons believed to have been older, Elizabeth would have had to have been abt 8-9 years of age when she started having children. I'd guess that she was born closer to 1700, and their sons probably started being born by about 1720. Clearly, a lot of things about the family's early history needs to be revisited, and perhaps revised a bit.