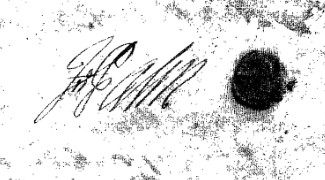 John Palin, chief justice, was born in Pasquotank County, perhaps the son of Henry Palin, who lived in the region in 1685. The Palin family, one of the first to settle in northeastern North Carolina, resided in the Pasquotank region of the old county of Albemarle.

Palin served as an attorney in 1713. Then, as regimental captain of the provincial militia, he was ordered by Governor Charles Eden to send volunteers to South Carolina in order to assist one Colonel Hastings in fighting the Indian rebellion of 25 May 1715. Palin was appointed justice of the peace and an assistant to the chief justice of the General Court in the Chowan Precinct of the county of Albemarle on 1 Nov. 1716. From 1718 to 1719 he served as escheat general. In October 1719 he was appointed associate justice of the General Court, with Frederick Jones presiding as chief justice.

Palin was reappointed justice of the peace in 1724 and also served as acting solicitor general. He sat on the Governor's Council of the province from 1725 to 1728, having been appointed by Sir Richard Everard on 17 July 1725, who was under the authority of the Lords Proprietors. Palin served again on the Council in 1730. He returned to the General Court in 1726 as associate justice. In 1729 he presided as a judge of the Court of Chancery. Governor George Burrington appointed him chief justice of the General Court on 27 July 1731 to succeed William Smith, who vacated the position upon returning to England. During the same year, he was nominated treasurer of Pasquotank. Palin served as chief justice until the following year, resigning on 18 Oct. 1732 for reasons of health. He was succeeded in the position by William Little. Palin served one term in the General Assembly after his election in 1734.

Palin was married in 1728 to Sarah Bull, also of Pasquotank, and had two children: Mary (b. 1729) and John (1732–55). He was active in the Church of England, serving as a church warden in 1717 and later as a vestryman of the South-West Parish, Pasquotank Precinct. He died in Pasquotank County, leaving as his estate a small plantation and the fourteen people he enslaved.