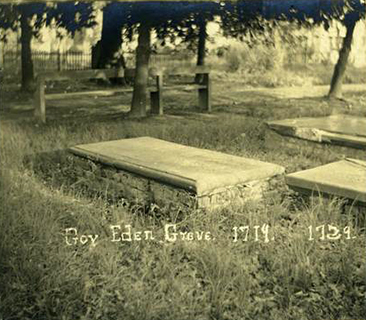 Charles Eden, governor of North Carolina under the Lords Proprietors, was born in England of the family of West Auckland, County Durham, which later produced a governor of Maryland, Sir Robert Eden. He received his appointment as governor from Queen Anne in 1713 to succeed Edward Hyde and was sworn in before the North Carolina Provincial Council "holden at ye house of Capt. John Hecklefield in Little River" on 28 May 1714. He had been given a thousand acres of land by the Lords Proprietors. The location of this property is not known, but it may have been in Beaufort County, as he lived for a while in Bath—traditionally on the west bank of Bath Creek, near its mouth. He later sold his property, Thistleworth, to John Lovick, secretary of the Council, and in 1719 moved across the Chowan River to what was soon to become Bertie County where his plantation, Eden House, was his home until his death. He was made a landgrave of the order of Carolina nobility as provided for by the Fundamental Constitutions of the colony. He was the last person to hold this title.

A staunch member of the Church of England, Eden was made a vestryman of St. Paul's Parish soon after his arrival in the colony. He was solicitous for the welfare of the church and the spread of its work in the colony, corresponding often with the Society for the Propagation of the Gospel in London on church matters. With Governor Alexander Spotswood of Virginia he appointed a commission to settle the long-standing boundary dispute between the two colonies, but no agreement was reached during his administration. Early in 1715 Eden sent North Carolina forces to aid South Carolina in its war with the Yemassee Indians. This was a quid pro quo for South Carolina's vital military assistance four years before, when the Tuscaroras threatened the existence of North Carolina settlements.

Eden's administration is remembered best for the activities of pirates—notably Stede Bonnet and Edward Teach ("Blackbeard")—in North Carolina waters, and for the purported connivance of colonial officials with these desperadoes. Tobias Knight, secretary of the governor's council, was implicated when a letter written by him to Teach was found on the pirate's body at his death, and also by the fact that a cargo taken from a captured ship was stored by Teach in Knight's barn. In Knight's letter, mention of the governor's desire to see and talk with Teach was deemed grounds for suspicion of Eden's collusion with the pirates, but no further proof was found. Knight was acquitted by the council of the formal charges brought against him. However, North Carolina authorities were far too slow in taking steps to stop the pirate's depredations. Virginia and South Carolina had complained for some time about their shipping losses. Finally, Governor Robert Johnson of South Carolina sent an expedition to the Cape Fear River, where Stede Bonnet was apprehended, taken to Charleston, and hanged. Shortly thereafter, Governor Spotswood of Virginia sent two sloops in pursuit of Teach. Near Ocracoke Inlet he was overcome and slain on 22 Nov. 1718, thus ending the "Golden Age of Piracy" in Carolina waters.

Eden married Mrs. Penelope Golland of Mount Golland (later known as Mount Gould) on the Chowan River. He had no children of his own; Mrs. Eden had a daughter, Penelope, by her former marriage. This young lady was married four times, first to William Maule, next to John Lovick, then to George Phenney, and last to Governor Gabriel Johnston. Eden left his stepdaughter no provision in his will, probably because of a dispute in 1720 with young Penelope's then husband, William Maule, surveyor general of the colony, over fees that the governor thought were due him. Eden's chief beneficiary was his friend John Lovick, secretary of the colony. By an interesting stroke of fate, Lovick's subsequent marriage to young Penelope (then the widow Maule) made her the owner of Eden House plantation. Four generations of Penelopes, mother to daughter, lived at Eden House before it finally burned.

Eden was buried on his plantation. In 1889 his remains and those of his wife, with their gravestones, were moved to St. Paul's Churchyard, Edenton. The town of Edenton, formerly known as "the Town on Queen Anne's Creek," was renamed in the governor's honor shortly after his death. His epitaph states that he "governed the province eight years to ye greatest satisfaction of ye Lords Proprietors and ye ease and happyness of ye people. He brought ye country into a flourishing Condition and died much lamented."

Sir John Burke, Genealogical and Heraldic History of the Peerage . . . of the British Empire (1858).

the picture that you have as

the picture that you have as enen house is notcorrect. that is a picture of the cupola house in down town edenton,n. c. built in 1758 by francis corbin.

Thanks, you are correct. The