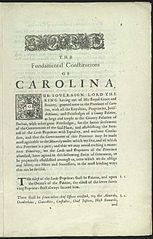 The main purposes of the Fundamental Constitutions were to protect Proprietary interests and to avoid the creation of a democracy. The Proprietors used the constitutions to try to establish a feudal government and society, so far as permitted by the Carolina charter of 1663. The feudal government was to be headed by nobles with the titles of palatine, landgrave, and cacique. They were to rule through their own courts, a grand council, and a Parliament. Freemen were to have a voice in government, but slaves and others who were bound were to have none. This government and feudal society were never fully implemented. Only the palatine's (Proprietor's) court operated for a time.

What was an important "right"

What was an important "right" granted by the Fundament Constitutions of Carolina?