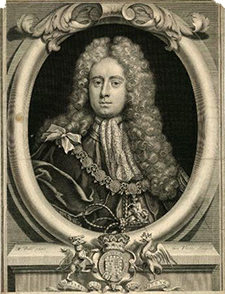 "Palatine" was the title applied to the senior ("eldest") member of the Lords Proprietors (and his successors), to whom the colony of Carolina was granted by the English Crown in 1663. The Palatine Court, headed by the palatine, was designed to be the executive body of colonial North Carolina under Proprietary rule. The court existed in two parts: one in England and the other in the New World. In England, the palatine and the seven other Proprietors formed an administration that controlled the activities of North Carolina and South Carolina from afar. The provincial Palatine Court, like its namesake in England, was essentially a governing board that was intended to carry out the wishes of the Proprietors on the local level. It was to create courts; appoint justices, sheriffs, and other officials; call and dissolve Parliament; and, if necessary, veto acts and judgments of that body. The Palatine Court was also empowered to establish new towns, recognize titles of nobility, review cases (particularly questions of admiralty law), and grant pardons.

The Palatine Court could grant land, and it could call out and control the militia, but its powers were limited by the Fundamental Constitutions and decrees of the Proprietors in England. Although the court met in North Carolina from the 1670s through the 1720s, little is known of its activities. In all likelihood, considering the Carolinians' disdain for the Fundamental Constitutions, this court may have functioned largely as an appeals court, with much of its power falling to the governor and his council. It ceased to exist in 1729, when the Crown purchased the Proprietors' shares in Carolina.