Pirates who frequented coastal North Carolina during the early colonial period were involved in enough nefarious activities to emerge as the subjects of at least a dozen books and numerous articles and short stories. Yet the bulk of this history centers around two men, Edward Teach and Stede Bonnet, both of whom appeared off the Carolina coast in 1717 and departed before the end of the following year, one beheaded and the other hanged. 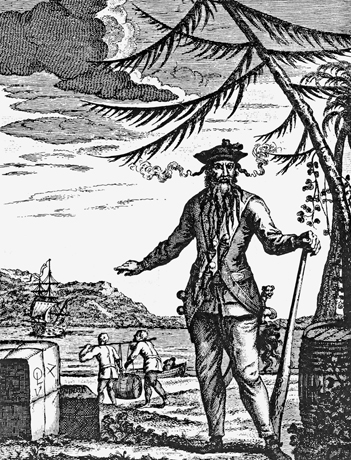 Teach, better known as Blackbeard, was the very personification of a pirate, a man of frightening appearance and brutal action who had terrorized the citizenry of Charles Towne (Charleston, S.C.) and coastal South Carolina before moving his freebooting activities to the sounds and rivers of North Carolina. Bonnet, who sometimes employed the surname Thomas, was just the opposite. He was described as the master of a plentiful fortune, the possessor of a liberal education, and a gentleman of good reputation in the island of Barbados; reportedly, he turned to piracy because he could not get along with his wife. His may be the only case on record of a man using his own money to buy and outfit a vessel for the specific purpose of pursuing piracy.

There were other differences between the two thieves. Whereas Blackbeard was a man of considerable maritime experience, Bonnet had a military rather than a naval background. And while Blackbeard began his career as a pirate under a captain experienced in privateering and piracy, Bonnet simply set sail with a crew he recruited on the docks at Barbados.

For a brief period in early 1718 the two pirates joined forces off the Carolina coast, but Blackbeard quickly took advantage of his new partner and they soon parted company. In time both accepted the king's offer of clemency and were given certificates of pardon by North Carolina governor Charles Eden; they then quickly resumed their piratical activities. Bonnet headed north, capturing several prizes off the Virginia coast before returning to the Cape Fear River to repair and refit his new flagship, the Royal James. When word reached Charles Towne that Bonnet was back, South Carolina's governor sent out two sloops commanded by Col. William Rhett to track him down. In late September 1718 Rhett captured Bonnet and his crew near Cape Fear and returned them to Charles Towne for trial.

Meanwhile, Blackbeard had established his base of operations in the North Carolina town of Bath, where he is reputed to have taken a teenaged girl as his fourteenth wife while establishing a working relationship with Tobias Knight, the governor's secretary, and even with Governor Eden himself. Alternating between capturing cargo vessels at sea and harassing traders on the Pamlico River and nearby sounds, Blackbeard seemed to have no fear of retribution because of his close relationship with Knight and Eden. Distressed by these activities, the responsible planters of the region finally appealed to Governor Alexander Spotswood of Virginia for help in ridding the provinces of the pirate. 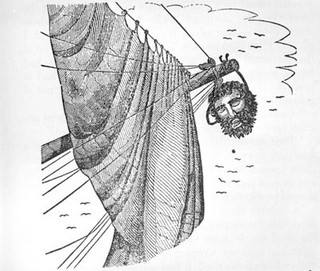 Spotswood responded by sending Lt. Robert Maynard in pursuit of Blackbeard with two sloops. Late in the evening of 21 Nov. 1718 Maynard caught up with Blackbeard, in a small sloop named Adventure, near Ocracoke Inlet. In a ferocious battle the next day, all of Blackbeard's crew were either killed or captured and the pirate himself was beheaded. Ten days later, in Charles Towne, the onetime Barbados gentleman, Stede Bonnet, was hanged in the public square, thus bringing to an end what has been called the golden age of piracy in North Carolina.

Though the brief careers of Blackbeard and Bonnet dominate the history of piracy in North Carolina, they were not the only buccaneers who operated along the colony's coast. As early as the 1690s it was reported that pirates had "flocked into Carolina from every quarter." Some of them were onetime Red Sea bandits seeking a place to retire in the American colonies far from their base of operations, but they seemed to prefer the busy port of Charles Towne to the less inhabited areas of North Carolina.

The single year 1718 saw more piratical activity in Carolina than any other time in its recorded history. A number of pirates who accepted the king's offer of clemency at New Providence in the Bahamas made their way to the American mainland and resumed their freebooting ventures. Again, they concentrated on the Charles Towne area, harassing vessels entering and leaving the busy port, and leaving periodically to cruise elsewhere, including along the North Carolina coast.

Almost three centuries after his death, Blackbeard made new headlines in North Carolina and around the world. In June 1718 Blackbeard's flagship, the Queen Anne's Revenge, had run aground approximately one mile off the North Carolina coast and eventually sank. The site of a wreck was discovered in November 1996, and the North Carolina Division of Archives and History began underwater archaeological investigations, believing the remains to be those of the notorious pirate's ship. Recovered artifacts include a brass blunderbuss barrel and a bronze bell dated 1705. Still submerged, the shipwreck features, among other items, cannons, anchors, a grapple hook, numerous barrel hoops, navigational instruments, pewter ware, lead shot, small arms, and gold dust.

I wasn't as familiar with

I wasn't as familiar with Stede Bonnet - Great info on him! I put together an article with videos on Blackbeard: http://www.manitouboats.com/blog/blackbeard-most-terrifying-pirate/ Hope you enjoy!