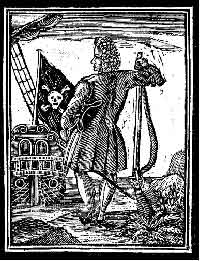 Stede Bonnet, army officer, planter, and "Gentleman Pirate," was said to have come from a good English family. Of his early life little is known, but he was considered to be a "gentleman that has had the Advantage of a liberal Education" and was "generally esteemed a Man of Letters." He gained the rank of Major in either the British army or the militia.

He went to Barbados as a sugar planter, prospered, and enjoyed the company of the best society in Bridgetown. Without warning, this seemingly respectable citizen suddenly turned pirate, leading his neighbors to feel that he had suffered a mental derangement (although some thought his disaffection was the result of the nagging tongue of a shrewish wife).

In early 1717, Bonnet, unlike most pirates who stole their ships, purchased a fast sloop that he named the Revenge. He paid the members of his crew out of his own pocket. Capturing ships off the Virginia and New England coasts, he established a tradition of burning every vessel from Barbados, although he often released those of a different registry after stripping them of their cargo. Sailing to the southward to the Bay of Honduras, Bonnet met up with the noted Edward Teach, better known as Blackbeard. Teach made Bonnet a virtual prisoner aboard his ship, the Queen Anne's Revenge, while placing one of his own men in command of the Revenge.

After cruising the sea lanes between the Bahamas and the Carolinas, the pirate flotilla put into North Carolina's Topsail Inlet. Here Teach and Bonnet parted company, and Bonnet traveled to Bath to seek the king's mercy under the Royal Proclamation of 5 Jan. 1718. Governor Charles Eden granted him permission to sail to the Virgin Islands to secure a commission as a privateer. Returning to Topsail Inlet, Bonnet discovered that Teach had abandoned the Revenge and marooned twenty-five of the crew on a sand bar. After a futile pursuit of Teach, Bonnet returned to pirating, changing his name to "Captain Thomas" and that of his ship to the Royal James.

After capturing a number of vessels, the Royal James began to leak badly. The ship was run into a waterway off the Cape Fear River so that her hull might be scraped clean of barnacles. The crew of a captured vessel were allowed to go free, and they spread the word that a pirate ship was careened in the lower Cape Fear. Captain William Rhett, receiver-general of South Carolina, had led two sloops out from Charleston in search of the notorious pirate Charles Vane. Informed of the ship in the Cape Fear, Rhett steered there on the chance that it might be Vane. In the afternoon of 28 Sept., in sight of the pirate sloop, Rhett's vessels ran aground. The following morning the South Carolina sloops were afloat. After the ensuing six-hour fight, Bonnet surrendered, but only after Rhett promised to intercede with the authorities on his behalf.

On 25 Oct., three days before his scheduled trial, Bonnet escaped and hid on Sullivan's Island in Charleston harbor. He was recaptured by Rhett. On 25 Oct. 1718, the twenty-nine members of his crew were tried and convicted, and on 8 Nov. they were hanged and buried below the high water mark at the edge of the marsh.

Bonnet was brought to trial two days later, and on 12 Nov. Judge Nicholas Trott condemned him to hang. On 10 Dec. 1718 Bonnet was executed at White Point. He was buried at the edge of the swamp alongside the bodies of the men he had led to their doom. Although sometimes termed the "Gentleman Pirate," Bonnet had proved not very successful in either capacity.

you helped me alot on my

you helped me alot on my reserch paper