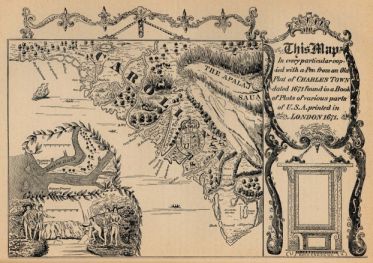 The Yamassee War, although fought in what is now South Carolina, involved many North Carolina Indian tribes. The war began on 15 Apr. 1715 as a reaction to the abusive trade practices that white traders imposed on the Indians. Yamassee warriors and those from other tribes fell upon a party of white traders and their families, killing about 90 of them. In response, an expedition from Charles Towne (modern-day Charleston, S.C.) killed several Yamassee leaders in a series of battles.

At the time the war broke out, South Carolina could produce fewer than 1,500 men capable of bearing arms, so South Carolina governor Charles Craven appealed to North Carolina and Virginia for assistance. Virginia sent guns, and North Carolina sent a force of 100 white men and a company of Tuscarora Indians under the command of Cols. Maurice Moore and Theophilus Hastings. Hastings took about half of the men south by boat, while Moore marched overland with the rest to join forces with Governor Craven. On his march south, Moore learned that the Waccamaw and Cape Fear Indians were planning an ambush. With a force of 60 whites and 60 Indians, Moore marched directly into the Indian towns, seizing a large quantity of ammunition and arms and capturing and enslaved 80 American Indian people. Craven's plan to join Moore in a campaign against the Saura (Cheraw) was thwarted because he was forced to turn back and protect Charles Towne against an Indian attack from the south.

Initially, the Cherokee remained neutral during the Yamassee War despite efforts by both sides to gain their support. But when Moore led an army of 300 men into Cherokee country to conduct negotiations on behalf of South Carolina, his mission was successful and marked the turning point in the war. By the spring of 1716, most of the Yamassee had settled in Florida. Other Indian tribes, including the Catawba and the Santee, made peace by fall. Subsequently, the Catawba turned on their former allies, killing many of the Waxhaw and Waccamaw Indians and scattering or enslaving the rest.