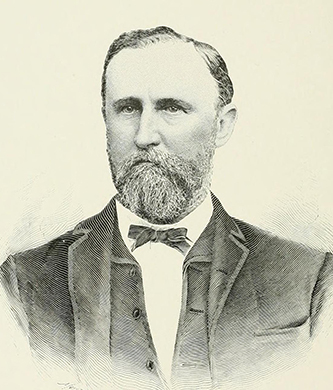 Rufus was raised by his grandmother, Mrs. Bartlett Yancey, after both his parents died when he was young. He received his primary education in Caswell County schools and then attended Wake Forest College. After graduating in 1853, he read law with Judges Frederick Nash and John L. Bailey in Hillsborough. In 1858 he married Mary F. Terry, the daughter of Dr. B. F. Terry of Prince Edward County, Va., moved to Graham in Alamance County, and established a law practice.

McAden entered politics in 1860 as a Whig candidate for the state legislature but was defeated by thirteen votes. In 1861 he was elected as a Union candidate to the state constitutional convention, which did not meet because North Carolinians rejected this early attempt at secession. From 1862 to 1865 he served in the House of Commons as a member of the Conservative faction. As a peace advocate, he introduced, in May 1864, the first peace resolution to pass the General Assembly. He continued to represent Alamance County in the house until the beginning of congressional Reconstruction in 1867; in 1866 he served as speaker.

In 1867 McAden embarked on a new career when he was chosen president of the First National Bank of Charlotte. He built a fortune through this and other business activities. In 1868 he became a railroad promoter and, along with A. S. Buford, constructed the Atlantic and Charlotte Airline Railroad, of which he was vice-president. He also organized and built the Spartanburg and Asheville Rail Road. In 1881 he entered into cotton manufacturing, establishing a large cotton mill in McAdenville, Gaston County, that employed almost five hundred people.

While McAden was extremely successful as a financier, he encountered several problems along the way. During the Civil War, Calvin Wiley, the first superintendent of the common schools in North Carolina, accused McAden of cheating him in a land deal. This caused a delay in McAden's pardon from President Andrew Johnson after the war when the provisional governor, William Woods Holden, a friend of Wiley's, recommended that McAden's request for pardon be "suspended" because of Wiley's complaints. During Reconstruction, McAden was involved in a minor way in a major scandal over fraudulent railroad bonds. The chief figures were George W. Swepson, a native North Carolinian, who was president of the western division of the Western North Carolina Railroad and McAden's nephew, and Milton S. Littlefield, a northern speculator. Together they sold approximately four million dollars worth of bonds and appropriated the proceeds for their own use. McAden either handed over some bonds for blackmail or for "services rendered." However, he was never tried or convicted for these actions.

In 1885 McAden clashed with Richmond Pearson. Pearson had been elected to the state legislature on a platform promising "to bend every energy to force the completion of the Spartanburg and Asheville railroad." To carry out this pledge, Pearson traveled to New York City to obtain information about the railroad. This, according to Pearson, "provoked the violent displeasure" of McAden, who was president of the line. In fact, McAden severely criticized Pearson in a letter to a Charlotte newspaper. Pearson declared on the floor of the house, in response to a question from Lieutenant Governor James L. Robinson, that he had not replied to McAden's article because he felt it was "unworthy" of his notice. About a half hour later, McAden assaulted Pearson on the streets of Raleigh. A year later, after another controversy, Pearson challenged McAden to a duel, which McAden declined because, he argued, duelling was illegal.

McAden was a handsome, distinguished-looking man of medium height with blue eyes. He died at his home in Charlotte. At the time of his death, he was president of the First National Bank of Charlotte, the Spartanburg, Union and Columbia Rail Road, the Spartanburg and Asheville Rail Road, the Falls of Neuse Manufacturing Company, and the McAden Cotton Mills. He left an estate valued at $850,000, not including $110,000 in life insurance, which was the largest estate recorded in Mecklenburg County to that date. He was survived by his wife and five children: Benjamin T., George S., Virginia Y., Giles M., and Mary T.

Cyclopedia of Eminent and Representative Men of the Carolinas of the Nineteenth Century, vol. 2 (1892 [portrait]).