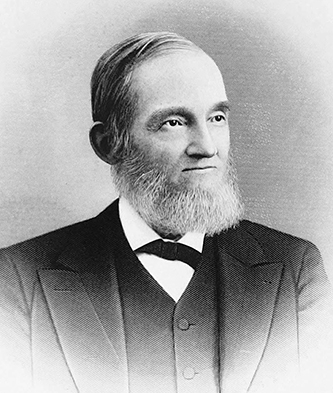 Calvin Henderson Wiley, writer and North Carolina's first superintendent of common schools, was born in the Alamance section of Guilford County, the son of David L. and Anne Woodburn Wiley. Of Scots-Irish origin, he was descended from the William Wiley who moved from Pennsylvania to North Carolina in 1754.

Wiley attended the Caldwell Institute in his native county and was graduated with high honors from The University of North Carolina in 1840. Admitted to the bar in 1841, he settled in Oxford, where he began editing the Oxford Mercury. He sometimes contributed to his own paper the "memoirs" of "Demi-John," a fictitious downhome-type character. In 1843 Wiley gave up the newspaper and soon relinquished his law practice, moving back to Guilford to help his family and to continue work on his novel Alamance.

His Alamance; or, The Great and Final Experiment (1847) was followed by Roanoke; or, Where Is Utopia ? (1849), which was published in England as Adventures of Old Dan Tucker and His Son Walter (1851). Other books included Utopia: A Picture of Early Life in the South (1852), Life in the South (1852), and Scriptural Views of National Trials (1863). Wiley was a founder of the Southern Weekly Post in Raleigh and of the North Carolina Presbyterian.

In addition to awakening readers to their state and culture through his writing, he became interested in the politics of education. Elected to the General Assembly by his home county (1850–52), he was instrumental in passing the law establishing the office of state superintendent of the common schools in 1852. He served as superintendent from 1 Jan. 1853 until 26 Apr. 1865, when all state offices were declared vacant after the surrender of the Confederacy.

During his thirteen-year tenure as superintendent, Wiley worked tirelessly for the establishment of common schools and for the improvement of education throughout North Carolina. He traveled widely, at his own expense, giving speeches on education. He contributed newspaper articles, made annual reports, and created and maintained interest in public education. Wiley established and edited the Common School Journal (later, North Carolina Education) and in October 1856 at a meeting in Salisbury organized the state education association. In cooperation with Braxton Craven, he began teacher training institutes. He established standards and examining boards for teachers that required annual certification of teachers and organized county school units giving instruction to county superintendents and school committeemen. During his superintendency the state office began to prescribe and distribute uniform textbooks for use in the schools. His book The North-Carolina Reader (1851) was published at his own expense and became a standard school text. On becoming superintendent, he disposed of his copyright, sold all of the copies and the plates at cost, and refused to accept any further remuneration for his work.

Wiley promoted universal education, advocating acceptance and support of the common schools. During the Civil War he urged Governor John W. Ellis not to divert school funds to the war effort; Ellis supported Wiley's position and the schools were kept open. The annual report for 1863 showed that 50,000 children were enrolled in the common schools. The percentage of illiteracy within North Carolina's voting population declined from 29.2 in 1850 to 23.1 by 1860, with the decrease being attributed to the schools' movement spearheaded by Wiley.

Using his communication skills as a writer and speaker, he devoted himself to finding ways to awaken a spirit of pride in the people. Wiley saw education as a means of overcoming the backwardness and poverty of his state. He began his mission through books and newspapers and later turned to elective and then appointive office to serve his fellow citizens. He built respect for the schools both within and outside the state. At the National Convention of Educators in Cincinnati in August 1858, he was on the program with Horace Mann. Wiley corresponded with his counterparts in other states, and among his papers are letters seeking his counsel from as far away as California.

Through his vision of a strong, vigorous system of common schools meeting standards set forth by the state, Wiley completely changed the concept of public education in North Carolina. By 1860 the state was considered to have the best public school system in the South. He is now known as the "Horace Mann of the South." Wiley's contribution was in creating an awareness of the state's cultural backwardness and in providing ways of overcoming it. He was a part of a new age in North Carolina. That the state was deprived of his services during the last twenty-odd years of his life was a loss not easily overcome. It was well into the twentieth century before Wiley's standards and guidelines from the state level began to influence public education again.

A religious person, Wiley in later years continued to serve his people, primarily through his work for the American Bible Society in Eastern and Middle Tennessee 1869–74 and afterwards in Salem, N.C. He had been licensed to preach by the Presbyterian church in 1855 and was ordained in 1866. In Salem he helped establish the local public school system.

On 25 Feb. 1862 Wiley married Mittie Towles of Raleigh, and they had seven children. He died at his home in Salem.

Wiley, Calvin Henderson. "Pastoral Letter from Alamance Church: To the Members of the Congregation now in the Army of the Confederate States of America." Greensboro, NC: Ingold & Clendenin, Printers, [1863]. https://docsouth.unc.edu/imls/wiley/wiley.html (accessed May 9, 2013).