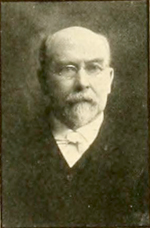 James Cameron MacRae, jurist, legislator, and educator, was born in Fayetteville, the son of John, the mayor and postmaster of Fayetteville, and Mary Shackleford MacRae, a native of Marion, S.C. He was the brother of Duncan, Thomas Ruffin, Robert Strange, Johanna Carolina, and Alexander.

MacRae received his basic education at Donaldson Academy in Fayetteville, where he was graduated in 1854. He planned to attend The University of North Carolina, but when financial problems prevented this, he secured a position teaching school in Cumberland and Brunswick counties and in Horry County, S.C. Meanwhile, against the advice of his brother Duncan, who wanted James to become a civil engineer, he taught himself the law. By 1859 he was proficient enough to receive his license to practice in county court and a year later in superior court. He entered a practice in Fayetteville with C. W. Broadfoot.

When war came, MacRae enlisted on 17 Apr. 1861 and served as a private in Company H, First North Carolina Regiment, known as the Fayetteville Independent Light Infantry, a military unit in continuous existence since 1793. In May 1861 the company moved to Raleigh and from there into southern Virginia, where on 10 June it encountered Union troops at the Battle of Big Bethel. In August 1861 MacRae was commissioned second lieutenant and transferred to Company D, Fifth Regiment, a part of the defense of Yorktown. This company also saw action at the Battle of Williamsburg.

By 30 May 1862 MacRae was promoted again and ordered to report to the Conscript Bureau in North Carolina. In September 1863 he was assigned under Colonel Peter Mallett as a major of battalion in the North Carolina cavalry. The battalion, later known as MacRae's Battalion, was headquartered in Morganton and Asheville. Its chief purpose was to search out and arrest conscripts and deserters in the western part of the state. When the battalion was disbanded in June 1864, MacRae was ordered back east as the assistant adjutant under General Laurence Baker. In this capacity, MacRae, on 20 Apr. 1865, issued General Order No. 25 which disbanded Baker's troops in compliance with the terms agreed to by General William T. Sherman. MacRae then left the military, returned to Fayetteville, and renewed his law practice.

On 31 Oct. 1867 he married Frances Hinsdale, whose father was a Fayetteville druggist. Because she was Episcopalian, they were married in St. John's Episcopal Church. Though reared a Presbyterian, MacRae now joined his wife's church. The couple had nine children: James Christopher, Samuel Hinsdale, Cameron Farquhar, Duncan, Theodore, John, Mary Shackleford, Elizabeth, and Frances.

Besides teaching a Bible class in the Episcopal church, MacRae joined the Fayetteville Phoenix Lodge of the Masonic order in April 1867. In politics he was a lifelong Democrat. In 1874 he was elected a Cumberland County representative to the General Assembly. He served on the internal improvements committee and supported a movement to reopen The University of North Carolina, which had closed in 1868.

In April 1881 MacRae presided over the Temperance Convention in Raleigh, even though many people felt that his position favoring prohibition would endanger his nomination to a superior court judgeship. But on 8 July 1882, Governor Thomas J. Jarvis appointed MacRae to take the place of Judge Risden Bennett. In November MacRae was elected to a full term, and he served on the court until 1890. In 1883 The University of North Carolina awarded him an honorary doctor of laws degree.

Prior to the 1890 election, the Fourth and Seventh Judicial districts were combined so that Judge MacRae was pitted against Judge James McIver of Moore County in the contest for superior court judge in that district. On 16 July 1890 at the Democratic nominating convention in Laurinburg, MacRae was defeated by a vote of 163 to 157.

On 24 Aug. 1892 Governor Thomas M. Holt appointed MacRae to take the place of Joseph Davis as associate justice of the North Carolina Supreme Court. In November he was elected to complete the term, serving until 1894, when he was defeated by David Furches. MacRae remained in private practice in Raleigh and was the attorney for the Seaboard Air Line Railway.

In 1899 he moved to Chapel Hill when he was appointed professor and dean of the law school. Under his leadership, the law school expanded in many directions. The curriculum was enlarged to include a combination of two years in liberal arts and two years in law. The practice of inviting members of the bar to be guest lecturers was increased. The moot court was divided into civil and criminal divisions. The number of books in the law library doubled from 1,500 in 1903 to 3,000 in 1909, and a librarian was added to the staff. At the beginning of MacRae's tenure, the law school's physical facilities consisted of two small dormitory rooms. By the end of his term, the school was housed in two large rooms in South Building, and MacRae had begun to advocate a separate building for the law school. Finally, enrollment grew from thirty-eight in 1899 to eighty-two in 1909.

In addition to his teaching and administrative duties, MacRae, at the request of the Bar Association, established and edited the North Carolina Law Journal. It was published monthly until 1905, when it was discontinued because a publisher could not be found.

MacRae died in Chapel Hill. After a funeral service at the Chapel of the Cross, his remains were taken by train to Fayetteville, where he was buried in Cross Creek Cemetery.