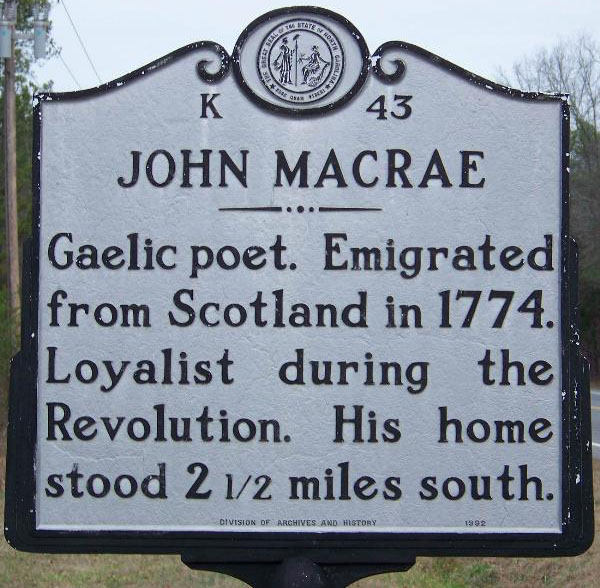 r before sailing for North Carolina in 1774 and settling on McLendons Creek (now in Moore County). In Gaelic, his name was Iain mac Mhurchaidh 'ic Fhearchair. MacRae was among the Highland Scots defeated in February 1776 by the Patriots at Moore's Creek Bridge, where his son Murdock was fatally wounded. During the American Revolution his Loyalist sentiments kept him in trouble, his taxes were increased, and finally, if legend can be trusted, he was captured and put to death in retaliation for the fierce devotion to George III expressed in his songs.

His patriotic and autobiographical poems, his lyrics, and his much admired lullaby, "Duanag Altrium," were all written in Gaelic. Most of them were composed during his North Carolina sojourn and, it is said, are still sung and recited in Nova Scotia and Scotland. MacRae's songs and poems are included in Gaelic Bards from 1715 to 1765 (1892) and Mactalla nan Tur (1901), collections compiled by A. Maclean Sinclair.