See also: Claude Kitchin (from the NC Office of Archives and History) for an additional biography and more information on Kitchin's role in white supremacist activities 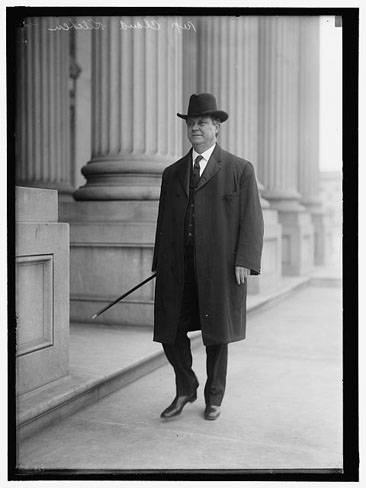 Claude Kitchin, attorney and congressman, was born in Halifax County near Scotland Neck, the third of eleven children of William Hodge and Maria Arrington Kitchin. His father, a Civil War veteran, practiced law in Scotland Neck while maintaining the family tradition as a cotton planter. Young Kitchin attended Vine Hill Academy in Halifax County and then, no doubt because of his Baptist heritage, enrolled at Wake Forest College; seven of his brothers also attended that institution, and one of them, Dr. Thurman Delna Kitchin, became its president. Claude, an excellent student, read law after his graduation in 1888 while serving as assistant registrar of deeds in the county. He was admitted to the bar in September 1890 and developed a successful practice. In the latter year he married Kate Mills, the daughter of Luther Rice Mills, a senior member of the Wake Forest faculty. The Kitchins had nine children.

In the years between Reconstruction and the end of the century, times were hard for farmers in the Tidewater and Piedmont. The Farmers' Alliance was strong in that area, and the elder Kitchin was one of its leaders. In the 1890s, when Republicans and Populists were considering fusion, black people voted in considerable numbers in eastern North Carolina; indeed, George White, a black Republican, was elected to the U.S. House of Representatives from the Second District where the Kitchins lived. During this period Claude Kitchin, though interested in politics, played no leading role. But he had become so well known that he was appointed to the North Carolina Democratic Executive Committee for the state election of 1898, and helped Furnifold M. Simmons, chairman of the executive committee, organize the "White Supremacy" campaign which restored the legislature to Democratic control. This campaign was characterized by intimidation and corruption at the polls, practices that its leaders believed were justified in order to eliminate the influence of an allegedly inferior race from the political scene.

In the Second District, Claude Kitchin helped mobilize the Red Shirts, bands of armed men who rode through rural communities warning blacks not to vote. Apparently he was also aware that trick ballot boxes made it possible to count only certain votes. His effectiveness in this campaign led to his nomination and election as congressman by his district. From then until his death, in eleven more consecutive elections, Kitchin met no significant opposition for the congressional post.

His early years in Congress were ones of preparation. He retained close ties with his constituents and supported efforts to create a Bryan-oriented Democratic party in his state, and to help his brother William undermine the organization that had elected Simmons senator in 1900. The Kitchins were only partially successful in this attempt. William Kitchin defeated Simmons's candidate, Locke Craig, for governor in 1908, but Simmons came back to defeat William Kitchin in the Senate race of 1912.

In the meantime, Claude Kitchin was slowly building up a reputation in the House. He was first assigned to the Committee on Claims, where he worked conscientiously although he rarely spoke on the floor. He gave the House at least one demonstration of his legal skills by an analysis of the French spoliation claims, which, according to one fellow congressman, settled that ancient issue once and for all. Then in 1904, he exhibited the sarcasm and wit—for which he was to be noted in debate—by a frontal attack on Theodore Roosevelt.

Kitchin made no significant contribution to the Congressional Record again until 1909, when he entered the debate over the Payne-Aldrich tariff (which he designated the "Pain-All-Rich Tariff"). His brilliant arguments startled veteran Republicans and were applauded by his Democratic colleagues. Indeed, he so impressed the hierarchy of his party that when committee appointments were next made, he was named to the prestigious Ways and Means Committee, of which Oscar Underwood was chairman. For the Democratic party, chairmanship of Ways and Means automatically made its occupant majority leader of the House. In 1915, the year after Underwood was elected senator, the fortunes of seniority elevated Kitchin to the dual post.

Kitchin's relations with Woodrow Wilson were a complex of enthusiasm and strain. He had supported Wilson for the presidency in 1912 and had been an architect of one of his administration's principal legislative victories, the Underwood-Simmons tariff and the income tax, but he had opposed Wilson's proposal to charge American coastal shipping for using the Panama Canal. As World War I shifted the government's attention to foreign policy, Kitchin became increasingly alarmed by the possibility of U.S. intervention. In general, he favored rigid impartiality towards belligerents and the avoidance of war at all costs. Moreover, he was against unusual expenditures for defense and thus opposed Wilson's conversion to preparedness in 1915. He was selective in establishing his position on the issue, for although he voted for the National Defense Act of 1916 (to strengthen the army and make important organizational changes), he opposed Secretary of War Garrison's Continental Army and voted against the administration's program for expansion of the navy. On other domestic matters, he usually supported the president's position but did not hesitate to declare his independence. For example, like most of his southern colleagues, he opposed the federal Child Labor Law of 1916 and voted to override Wilson's veto of the Immigration Act of 1917. Yet, as in 1912, there was no question that he would go down the line for the Democratic candidate in 1916 because, as he said in Durham on 7 October, "Woodrow Wilson is the only star in this firmament of nations with peace and good will to men."

Kitchin's finest hour came in response to Wilson's appeal to Congress to declare war on Germany. In a dramatic midnight speech, on 5 Apr. 1917, Kitchin emotionally told a packed House that he was "unwilling for my country by statutory command, to pull up the last anchor of peace in the world and extinguish during the long night of a world-wide war the only remaining star of hope for Christendom." Knowing that by voting against a declaration of war he was choosing an unpopular path, he offered to walk it "barefoot and alone." Fifty congressmen voted with him—five from the South, including E. Yates Webb of North Carolina.

Kitchin was both denounced and praised for his stand. Some critics argued that he should give up his majority leadership, but he refused to do so voluntarily and asserted that, because the Congress had spoken, he would loyally support the war effort. As chairman of Ways and Means, he was responsible for seeing that unprecedented revenue legislation was carried through Congress. The first war loan of $7 billion, as he told the House, was the "most momentous project ever taken by the United States," providing for more funds than had ever been authorized by "any legislative body in the history of the entire world." The same superlatives were applied to the tax bill, passed with more opposition in October 1917. Kitchin consistently fought to increase the proportion of expenditures to be borne by taxes as opposed to loans so that the cost of the war would fall less heavily on future generations, and to impose the heaviest burden on excess profits. In defending these principles he occasionally found himself at odds with the Senate Finance Committee, led by fellow North Carolinian F. M. Simmons. Both were forced to compromise. Kitchin and Simmons were jointly responsible for three war loans (liberty bonds) and a victory loan, all passed without dissent, the War Finance Corporation (5 Apr. 1918), and two tax bills; the second, designed to help pay for the skyrocketing expenses of the second year of the war, aimed at raising about $8 billions—more than four times the estimated returns from the first. But so great was the difficulty in getting agreement on this measure that it was not passed until three months after the armistice.

In the elections of 1918, the Republicans carried the House of Representatives. When the Sixty-sixth Congress met in May 1919, Champ Clark, who had been speaker of the House, became minority leader and Kitchin became ranking Democrat on the Ways and Means Committee. On 9 Apr. 1920, Kitchin made one of his infrequent speeches in Congress on a subject unrelated to finance. On this occasion he opposed, with characteristic wit and eloquence, a separate peace with Germany on the ground that it would place Germany on an equal footing with the United States in determining the terms of peace. At the end of the speech, he collapsed with a paralytic stroke. He was able to return to his seat briefly in December, but dizzy spells continued, and he went to Albany, N.Y., for brain surgery which appeared to be successful. When Congress met on 11 Apr. 1921, Champ Clark had died and Kitchin was elected minority leader. Although unable to be active in that position, he was reelected in 1923. During the winter of 1922–23 he contracted influenza and pneumonia, and, as a result of complications from these ailments, was taken to a hospital in Wilson, N.C., where he died. He was buried in the Baptist cemetery at Scotland Neck.

Kitchin had once been a man of magnificent physique and powerful voice, tall, erect, black haired, and black eyed. During the last three years of his life, he courageously fought his physical incapacity. When unable to go to the Capitol, he urged his Democratic colleagues by letter to retain the excess profits tax, to fight to the end against increasing tariff duties, and to refuse to compromise with the Republicans who advocated lowering rates on upper incomes.

Opinions varied as to Kitchin's abilities. Senator John Sharp Williams of Mississippi, shortly after Kitchin's antiwar vote in 1917, wrote privately that he "never was any account" and called him "a constitutional dashboard kicker." The New York Times, which seemed incapable of accepting anyone from Scotland Neck as majority leader of the House, became particularly critical when in the War Revenue bill he advocated increases in rates for second-class mail. After his death, the editor of the Greensboro News bewailed his having been majority leader during the war, calling him a "broken reed," unable "to make a new judgment based on the facts as they existed, and not on ancient shibboliths and venerable formulas."

Yet he had enthusiastic defenders. J. G. de Roulhac Hamilton, who disagreed with him on the war issue, praised him for his sincerity and courage. Few denied his ability as a debater. "I do not recall any instance where Mr. Kitchin has ever been embarrassed and in almost every instance his questioner was covered with confusion and laughter," said Representative John Small. "But there is no poison in his arrow, and he has numerous friends among Republicans." A veteran Republican congressman, James R. Mann, who had frequently debated with Kitchin, confirmed this judgment and described Kitchin's words in debate as "like a brick in a towel." He treated his victims, according to Francis H. Gillette, Republican speaker of the House in 1923, "as if he loved them . . . and they generally reciprocated."

Kitchin devoted his energies to revenue legislation, and an ability to do mental arithmetic no doubt helped him in the mastery of taxes and tariffs. Although much more populistically inclined, he matched the ability of F. M. Simmons, a longtime member of the Finance Committee and Kitchin's longtime rival on the state and national levels, in dealing with financial legislation and with Treasury experts. Simmons's respect for Kitchin grew, as did that of his fellows in the House. Some even hazarded the opinion that, had his health been good, the independent Republicans in the House would have joined the Democrats to make him majority leader in the Sixty-eighth Congress despite the theoretical majority held by the Republicans. By that time, however, he was mortally ill, "as truly a casualty of the war," said Clarence Cannon of Missouri, "as if he had died leading the charge upon the crimson fields of France."