By Christopher Meekins, NC Office of Archives and History, 2020 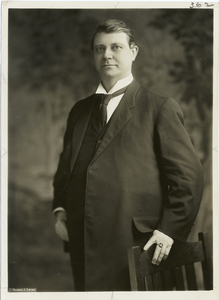 Congressman Claude Kitchin, born on March 24, 1869, was the third child of United States Representative William H. Kitchin and his wife Maria. Claude followed his brother, William W. Kitchin in attending Wake Forest College and practiced law in Halifax County after his graduation in 1888. In September 1890 he married Kate Mills, the daughter of Luther Mills, a senior member of the Wake Forest faculty.

Claude Kitchin entered politics at the behest of his father and brothers. The Kitchins, lifelong Democrats, were leading members of the Farmers’ Alliance, a Populist movement in the 1890s. When Populists and Republicans began joining forces and courting the African American vote, however, the Kitchins became appalled at the likelihood of black Republicans gaining elective office, especially the Congressional seat. In 1894, African American voters turned out in considerable numbers in eastern North Carolina resulting in the election of African American George Henry White, Republican, to the U. S. House of Representatives.

After this election, Claude Kitchin, who previously had played no leading role in political matters, was appointed to the North Carolina Democratic Executive Committee. In that role, he was instrumental in helping to organize the White Supremacy campaign of 1898 that established Democratic control of the state. Kitchin stood out as a white supremacist leader at the county and state level and organized the Red Shirts, bands of armed men who assaulted and intimidated black voters. Even so, George Henry White managed to secure reelection to the U.S. House in 1898. Kitchin’s beliefs and actions gained him a popular following among the county’s white voters.

White supremacists’ tactics of intimidation and violence in the 1898 election gave Democrats control of the state of North Carolina. That control allowed Democrats to craft new legislation that would solidify their hold on power. A major thrust of change was to the voter laws – seeking to prevent African Americans from voting.

The 1899-1900 changes to the N. C. Constitution required voters be able to read and write a section of the Constitution and to pay a poll tax. Knowing that many illiterate whites would also be disenfranchised, the Democrats included a “Grandfather Clause.” The clause provided that if you could not read or write you could still vote if your grandfather had been an eligible voter under the laws of your state of residence on January 1, 1867. The 1867 date was prior to the 15th Amendment to the U. S. Constitution which ensured all citizens the right to vote. It was also prior to most African Americans being granted the vote in North Carolina.

Given these restrictions, George Henry White decided against running for office in 1900. Instead, Kitchin ran and was elected to the United States House of Representatives. The new voter laws, Red Shirt intimidation, and, possibly, ballot boxes rigged to count only certain votes, not only secured the win for Kitchin but also ensured that he had no opposition for the next eleven consecutive elections.

Claude took a brief respite from Congress in 1908 to help his brother William defeat Locke Craig in the North Carolina gubernatorial election. Kitchin is often remembered for his adamant opposition to Woodrow Wilson’s decision to enter America into the First World War. Known as a powerful debater, Kitchin was described by a fellow senator, “I do not recall any instance where Mr. Kitchin has ever been embarrassed and in almost every instance his questioner was covered with confusion and laughter.”

On April 9, 1920, Kitchin delivered a speech in Congress opposing the possibility of America signing a separate peace with Germany on the grounds that it would place the countries on an equal footing in further peace negotiations. Finishing his oration, Kitchin collapsed from a paralytic stroke. He returned to Congress briefly after brain surgery in 1921, but shortly thereafter he contracted pneumonia and influenza. Claude Kitchin died on May 31, 1923, at a hospital in Wilson, from the effects of the illnesses. His friends believed that the energy he had spent in opposing the war likely had led to his stroke and poor health. Senator Clarence Cannon of Missouri commented, “He was truly a casualty of the war, as if he had died leading the charge upon the crimson fields of France.”