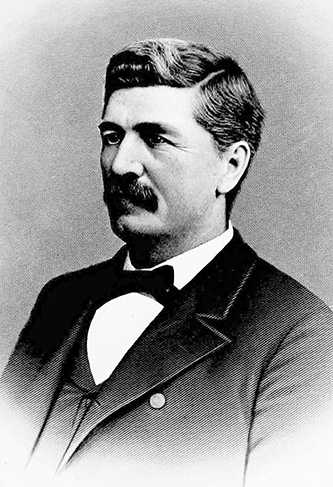 Thomas Dillard Johnston, lawyer, legislator, and congressman, was born at Waynesville in Haywood County, the son of William Johnston, a native of County Down, Ireland, and Lucinda Gudger Johnston, of the prominent Gudger family of Asheville. He was the first cousin of James Madison Gudger, Jr. His early education took place in the common schools of Haywood County, primarily the log school of James N. Terrell. For four years he attended the preparatory school of Colonel Stephen D. Lee near Asheville before entering The University of North Carolina as a sophomore in 1858. In less than a year, however, ill health caused his departure from Chapel Hill.

As the Civil War approached, Johnston was an opponent of secession; but when the conflict became imminent, he enlisted in the Rough and Ready Guards, a company formed at Asheville under Zebulon Vance. This group was soon incorporated into the Fourteenth North Carolina Regiment, and young Johnston was elected a lieutenant of his company. Upon a later reorganization of the regiment, he was appointed adjutant. At the Battle of Malvern Hill he received three severe wounds, from which he nearly died. when he finally recovered he was appointed quartermaster of Colonel W.C. Walker's battalion and was promoted to the rank of captain, but his health soon failed once again and he resigned from the military.

After an extended period of recovery, he attended the law school of Judge James H. Bailey and his son W. H. Bailey at Black Mountain. On completing the course of study there in 1867, he was admitted to the bar.

Johnston's political career was launched in 1868 when he received the Democratic nomination for district solicitor, but his candidacy was voided by the military reconstruction government. Continuing to be a leader in the resurgence of the Democratic party, he was the first of that group since the war to be elected mayor of Asheville, in 1869, and then representative to the General Assembly from Buncombe County the following year, defeating the incumbent Republican. In the Assembly Johnston served on the judiciary and finance committees, and was named chairman of the House Committee on Constitutional Reform and one of the managers in the house of the impeachment of Governor William W. Holden. In the finance committee he drew up the bill that finally settled the state debt, although the bill was not passed by the senate for a few sessions. In 1872, he was reelected and was named to the Electoral College as a Greeley delegate. Two years later he did not seek reelection, but in 1876 he won a seat in the state senate from Buncombe and Madison counties, having run on a platform calling for the swift completion of the Western North Carolina Railroad. After only one term in the senate he returned to his private law practice.

In 1884 Johnston received the nomination for the Ninth District congressional seat being vacated by R. B. Vance, and was elected over Hamilton G. Ewart of Hendersonville. He was reelected two years later, but was defeated by Ewart in 1888. In Congress, his major accomplishment was to get a federal appropriation for the building of the federal courthouse in Asheville.

After his defeat, Johnston practiced law and stayed out of politics. On only one occasion did he speak out on a political matter and that was to denounce the government's proposal to repudiate the bonds that supported the building of the Spartanburg-Asheville Railroad.

On 10 July 1879 Johnston married Leila Bobo of Spartanburg, S.C., and they had two daughters: Leila Maie and Sarah Eugenia. He spent his last years in faltering health, which rapidly declined after the death of his wife in March 1902. He died three months later and was buried at Riverside Cemetery, Asheville.

Buncombe County Bar, Asheville, N.C. and John P. Arthur. Proceedings of the bar of Asheville, July 28, 1902, upon the death of Honorable Thomas Dillard Johnston; being the resolutions adopted and the memorial address. [Asheville? N.C.]. 1902. https://archive.org/details/proceedingsofbar00bunc (accessed May 27, 2014).