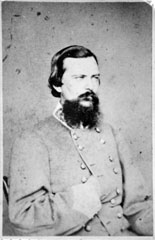 Robert Brank Vance, Confederate general and politician, was born at the family home at Reems Creek, near Asheville in Buncombe County. He was the son of Captain David (1792–1844) and Mira Margaret Baird Vance, the nephew of Congressman Robert Brank Vance, and the brother of Governor Zebulon Baird Vance. His formal education was limited, but he did attend the local country schools and was taught by his mother at home, where he had access to the extensive library left by his uncle.

At age twenty Vance was elected clerk of the Buncombe County Court of Common Pleas and Quarter Sessions, a post held by his father until his death. He maintained the office until 1858, when he declined reelection in order to become a merchant in Asheville.

Like his brother, Vance was an ardent follower of the political philosophy of Henry Clay and the Whigs. As the Civil War approached, he maintained strong Unionist sympathies and was an avid supporter of John Bell, the Constitutional Union party candidate for president in 1860. But when the conflict did come, he offered his services to the Confederacy, forming the Buncombe County Life Guard, which later became Company H of the Twenty-ninth North Carolina Infantry. After the training period at Camp Patton in Asheville, Vance was unanimously chosen as the division's colonel, and he and his men were dispatched to East Tennessee to guard the bridges on the Bristol-Chattanooga road from raiders. In February 1862 they were moved to Cumberland Gap, where they saw their first real action at the battle on 24 March. On 30 Dec. 1862 Vance's division was the first into action at the Battle of Murfreesboro and suffered heavy casualties; the colonel's own horse was killed beneath him by a shell. Vance was commended for his meritorious service by his superior, General John P. McCown, leading to his commission by Jefferson Davis as brigadier general. 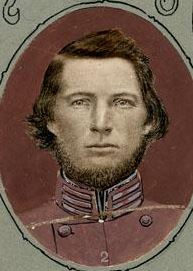 On his recovery from a lengthy case of typhoid fever, Vance was put under the command of General Braxton Bragg, who placed him in charge of the North Carolina–Tennessee mountains, a difficult assignment as the terrain was very rough and anti-Confederate sentiment was high. Here they were to harass the Union flanks and disrupt the flow of enemy supplies. On one such mission in January 1864 they managed to capture a major supply train going to General Ambrose Burnside's troops near Knoxville, but on trying to remove the wagons to North Carolina, Vance and virtually all his troops were taken prisoner at Crosby's Creek. Confined in Union prisons in Nashville, Louisville, Fort Chase (Ohio), and Fort Delaware, Crosby was given a special parole by President Abraham Lincoln to buy clothing for other Confederate prisoners. This was achieved largely at the instigation of the Reverend Nathaniel G. Taylor, who had been a prisoner under Vance in Tennessee but was well treated and later released. On 14 Mar. 1865 Vance was given a full pardon and allowed to return to North Carolina on condition that he not fight again.

In 1872 he was elected as a Democrat to the congressional seat earlier held by his uncle and his brother. During his six terms in office he obtained appropriations to get mail delivery daily in every county in his district and to have the French Broad River dredged from Brevard to Asheville for transportation purposes. He also brought resolutions to the floor which sought to relax laws and punishments concerning home distillery of alcohol. He served on the Committee on Pensions for Veterans of the War of 1812, the Committee on Coinage, and the Committee on Patents, which he chaired for four terms. After being an unsuccessful candidate for re-nomination in 1884, he was appointed assistant commissioner of patents by President Grover Cleveland and held the post through Cleveland's first administration. Vance ended his political career as a member of the North Carolina General Assembly (1893–96).

Vance was a member of the Knights Templar and the Freemasons, serving for two terms as grand master of the North Carolina Masons (1868–69). He helped found the Asheville chapter of the Sons of Temperance and was grand worthy patriarch of the state organization. A devout member of the Methodist Episcopal Church, South, he was elected many times to its General Conferences; he served as secretary-treasurer of the Holston Conference College and was chosen as a representative to the Ecumenical Methodist Conference, London, in 1881 though he was unable to attend. He was also an accomplished poet and published collections under the titles Heart Throbs from the Mountains, Oneka; or, The White Plume of the Cherokee, and Shadows of Mountain Life, among others.

He died at his farm at Alexander, near Asheville, and was buried at Riverside Cemetery, Asheville.