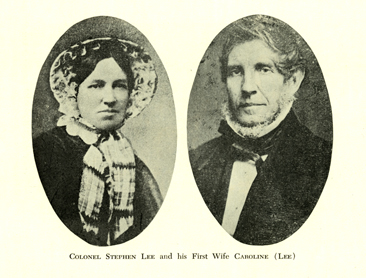 Stephen Lee, teacher and Confederate officer, was born in Charleston, S.C., the son of Judge Thomas and Kezia Miles Lee. In 1819 he entered the U.S. Military Academy where he remained for two years, attaining rank as fifth in a class of eighty-six. It is not clear why he resigned or what he did between 1821 and 1826, when he entered the College of Charleston, but he was graduated from the latter in 1828. After studying law, he entered practice with his father. It is reported that he abandoned the profession after successfully defending a man accused of murder and in whose innocence he believed. After his acquittal, the accused confessed to Lee that he actually had committed the murder.

In 1835 Lee became professor of mathematics at the College of Charleston. Then, moving to Asheville, N.C., in 1846, he established a school for boys along the Swannanoa River. This highly regarded school regularly drew large numbers of young men from various southern states, particularly those from distinguished South Carolina families. Except for a few brief interruptions, the school continued operations until Lee's death in 1879.

At the beginning of the Civil War, Lee, on 17 June 1861, was elected colonel of the Sixteenth Regiment, North Carolina Volunteers. With his regiment he saw service in western Virginia when Federal forces invaded that region; he afterwards served under General Robert E. Lee elsewhere in Virginia. He was present with his command or accounted for until 13 Feb. 1862, when ill health and advanced age forced his resignation. Returning to Asheville, he resumed his work as a teacher, recruited new troops, and organized both young boys and old men into a defense unit known as "Captain Lee's Company (Silver Greys)." These local defense troops participated in action against the marauding enemy near the end of the war. Reportedly, on 3 Apr. 1865 fewer than three hundred men under Lee repulsed over a thousand enemy troops when they marched over from eastern Tennessee intending to loot and burn Asheville.

About 1869 some of Lee's neighbors suggested that he clear some of his land to produce tobacco. Taking their advice, he began growing a new "bright yellow" leaf. Soon farmers in the area followed his lead, and the production of this tobacco became an important source of income in the county.

Lee married his first cousin, Caroline Lee, in 1824, and they became the parents of fifteen children: Julia Eliza, John Miles, Kezia Harriet, Emily Kezia, William Franklin, Charles C., Carolina, Thomas, Elizabeth Susan, Henry Buist, Mary Adeline, Stephen, Benjamin Markley, Joseph T., and James Hardy. In 1856, a year after the death of his first wife, Lee married Mrs. Sara Rosanne Patton Morrison, and they had a daughter, Carolina. Nine of the Lee sons fought for the Confederacy—four died, one lost an arm, and one was captured and imprisoned for a considerable time.