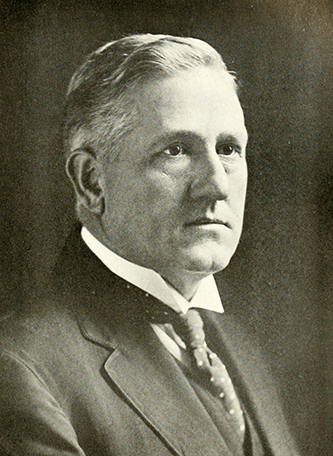 George Adonijah Grimsley, educator and insurance executive, the son of William Pope and Susan Dixon Grimsley, was born and raised on a large plantation in Greene County. At first, his parents employed a graduate of West Point to give him basic educational instruction. When he was old enough, they sent him to Bingham Military Academy, which was reputed to be one of the best in the South. From Bingham he entered Peabody Normal College in Nashville, Tenn. This institution was noted for its special training of teachers, who were greatly needed in the South after the Civil War. With a bachelor of arts degree, Grimsley returned to North Carolina and organized the graded public schools of Tarboro. Elected as the first superintendent, he made such a distinguished record that his name soon became well known all over North Carolina.

After serving for eight years in Tarboro, Grimsley was appointed superintendent of public schools in Greensboro in 1890 at the age of twenty-eight. At that time there were only two schools in Greensboro; both were controlled by a school committee that was appointed by the mayor. This committee also recommended all the officers and teachers whose names were submitted to a board of aldermen for final selection. Grimsley soon learned that this procedure had not been satisfactory, and he proposed the creation of a Greensboro school board. His plan was adopted in 1893 and has been in operation ever since.

Grimsley was a man who built for both the present and the future. Public libraries throughout the state are the result of his innovative ideas. According to his auto-biographical account, he believed that one of the greatest factors in the education of a child was his training to think for himself, both orally and in writing. Moreover, boys and girls were not educated in schools, but were merely exposed to the way of getting an education. He contended that training pupils "to think and to give expression to their thoughts, and at the same time giving them a taste of the best literature, would equip them to continue their education after leaving school, and to get more out of life." Grimsley further reasoned that if one thinks there must be stimulus for thought. In learning how to think, he maintained, there is no better inspiration than that provided by a careful reading and interpretation of man's accomplishments in literature and in life. This theory led to practical applications in the classroom. He encouraged teachers to assign home reading, to open classroom discussion, and then to have the students write essays at school in order to see how well they had learned their lessons. Every Friday afternoon in each classroom the pupils were required to recite or debate the subjects they had studied.

This method of teaching in the Greensboro public schools attracted attention, and before long Superintendent Grimsley was employed to instruct prospective teachers at regular sessions and in the summer schools of The University of North Carolina. He found that wider reading required a larger selection of books, and therefore a good library was essential. From his first years with the Greensboro public schools, Grimsley worked to build up a good school library. Of this experience he wrote: "The money for the purchase of books for the school library was raised by school entertainments and by contributions from pupils and parents. Every grade had a library day once a week. Many of them denied themselves candy and gum and contributed their pin money to the library."

Success in the use of a school library led Grimsley to another thought: "the climax of the public school system should be a splendid public library—the university of all the people—maintained by public funds just as public schools." This idea was heartily supported by his community, and the Century Club, a literary organization of Greensboro to which Grimsley belonged, made plans for establishing public libraries across the state. State Senator Alfred Moore Scales, president of the club, agreed to introduce in the legislature a bill for the provision of public libraries.

In a basement room of the Normal and Industrial College (now the University of North Carolina at Greensboro) in 1897, Grimsley, Philander P. Claxton, and Annie Petty, the first trained librarian in North Carolina, backed by the Centurians, drafted a bill providing that any city or incorporated town with over a thousand inhabitants might establish a public library and maintain it by public taxation as a part of the school system. Grimsley, in his autobiographical sketch, wrote that he secured the passage of what became known as the "Scales Library Act." It was thus named because Senator Scales was responsible for getting the bill before the legislature; there is no doubt, however, that Grimsley was the prime mover of the project.

Under the Library Act, the Greensboro Public Library was opened in 1902. As chairman of the State Library Association, Grimsley led the local movement to obtain the first public library in North Carolina. At his suggestion, the books that he and the students had so assiduously collected for the public school libraries were moved to the City Hall. There, on the third floor, three rooms were turned into the general public library's first home. With 1,490 books, 32 periodicals, and 3 daily newspapers, the Greensboro Public Library began to serve the reading public.

Grimsley's next pioneering move was to open a public high school in his community. From the time the first permanent public graded schools were opened in Greensboro (also the first in North Carolina) in 1875, some courses at the high school level were offered. As early as 1888 the graded schools prepared students for college entrance, but no separate schools had been provided. Grimsley decided to do something about this situation, and in 1899 he opened one of the first public high schools in the state. Dr. W. H. Payne, chancellor of Grimsley's alma mater, was so impressed with the work of this former student that the honorary degree of master of arts was conferred on Grimsley in June 1899. The chancellor wrote: "If you were a son you could hardly stand higher in my regard."

Superintendent Grimsley had worked for twelve years with the Greensboro schools when he decided to serve North Carolina in another capacity—through the provision of life insurance. He reasoned that such insurance would not only be a personal financial protection to the family, but also its funds would be available for loans to buy homes and farms and to promote industrial expansion. He firmly believed that this field could offer social and economic growth so badly needed in the South.

In 1902, Grimsley withdrew from school work to become one of the foremost insurance leaders in the city, state, and nation. In 1901, he had proved himself an expert organizer when he launched the Security Life and Annuity Company of Greensboro and became its secretary. This was the first life insurance company established in North Carolina after the Civil War. In view of its success, Grimsley was invited to Raleigh in 1907 to help organize the Jefferson Standard Life Insurance Company. In 1912, this firm—keeping its name—merged with Grimsley's Security Life and Annuity Company and the Greensboro Life Insurance Company, each of which had more insurance in force than did Jefferson Standard. After operating in Raleigh for one year after the merger, the Jefferson Standard Life Insurance Company was moved to Greensboro and Grimsley became its president. He served in that capacity during its formative years from 1913 to 1919, adopting the motto, "Be conservative with a move on!"

In 1920 Grimsley joined with Collins C. Taylor in organizing the Security Life and Trust Company. With Grimsley as president, the company began operations in Greensboro; during its first ninety-eight days $1,176,000 of new business was written. This amount is believed to have been a record production for a new company up to that time. The prosperous firm attracted the attention of leading businessmen of Winston-Salem, who in 1924 persuaded the officials of Security Life and Trust Company to establish headquarters in their city. Grimsley remained president until his retirement in 1932; at that time he was named chairman of the board, a position he held for the remainder of his life.

In its twenty-fifth year of operation, the Security Life and Trust Company was ranked among the top fifty-five (out of more than four hundred) life insurance companies in America by Alfred M. Best and Company of New York, a recognized authority in the field. Best stated: "the Company [Security Life and Trust] has been most ably managed in the interest of its policy-owners and the results achieved are well above the average for the business. In our opinion it has more than ample margins for contingencies."

On 30 July 1890, Grimsley married Cynthia Tull of Kinston, and they became the parents of William Tull and Harry B. During the last two years of his life, Grimsley suffered from pernicious anemia; he died at his home in Winston-Salem and was buried in Green Hill Cemetery, Greensboro.