Part 3: The First Graded Schools, the State Constitution of 1868, and Legal Segregation 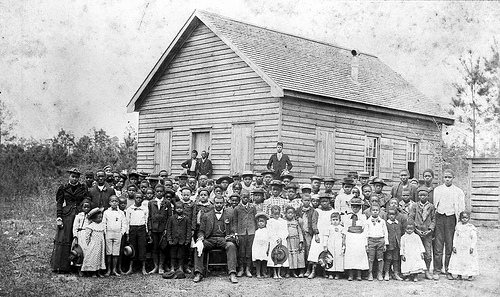 North Carolina's system of graded public schools dates from the Civil War era, when the General Assembly authorized expansion of ungraded common schools at [Calvin] Wiley's urging. The advent of war in 1861 slowed the process, but Wiley and his colleagues were undeterred. In 1862 the State Educational Association enthusiastically endorsed a comprehensive system of primary, grammar, and secondary instruction, "embracing the complete curriculum from the lowest primary to preparation for college entrance." It took more than two years for Wiley's proposal to pass both houses of the legislature. The authorizing act of December 1864 envisioned a voluntary network of graded primary and high schools in every county, open to all white children between the ages of 6 and 21. The progressive system also admitted all white female residents under age 27 who wished to teach, as well as disabled male war veterans under age 36. No additional state funding was provided for the new schools beyond the traditional Literary Fund distributions, as public donations were expected to fund additional operating expenses.

After nearly four years of a brutal, expensive Civil War and spiraling inflation, the prospects for adequate school funding proved elusive. The General Assembly voted, in effect, to dismantle the public school system by declining to appropriate funds for its operation after December 1865. In a direct attack on Wiley's progressive policies, the legislature also voted to abolish the position of state superintendent of common schools.

The outlook for public education in North Carolina became more hopeful with the adoption of the state's so-called radical Constitution of 1868, a relatively progressive document that provided for a "general and uniform" public school system, free to children aged 6 to 21 and funded by "taxation and otherwise," to be administered by an elected superintendent of public instruction and a State Board of Education. The 1869 General Assembly was empowered to implement the constitution's provisions, but funding remained sporadic and insufficient, given the high cost of providing adequate instruction for more than 100,000 children of formerly enslaved people. Moreover, there was little support from child labor laws or recognition by the general public of the need for improvement.

A significant trend, however, was the growing emphasis on teacher training with the organization of 13 "normal" schools across the state-8 for blacks and 5 for whites, reflecting the need for black educators to catch up with their white counterparts, who often had the advantage of a complete or ongoing college experience to prepare them to teach. Although the legislature of 1869 had established the basis for educating black children, most of the focus remained on whites. Since school funding was primarily a local endeavor, poorer rural communities of black Americans often could not support adequate facilities. Most black normal schools and teachers' institutes were small and poor; their growth and success often depended on funding from black self-help groups, churches, and white northern philanthropy.

The Greensboro Graded School, approved by voters in May 1870, became the first public graded system in North Carolina. It was followed by authorizing acts for local elections in Charlotte (1873), Fayetteville (1878), Asheville (1879), Wilson and Goldsboro (1880-81), and Durham (1881). The 1876-77 General Assembly enacted a graded school law applicable to larger towns and cities, a concept gradually extended to smaller towns. The 1883 legislature then passed the Dortch Act, allowing city voters to divide tax revenues along racial lines, a provision ultimately ruled unconstitutional by the North Carolina Supreme Court.

Economic recovery after the Civil War required an educated population, even in a largely rural state, and by the end of the century, every county had a graded school system for all students. Social and political prejudices were acknowledged, even during Reconstruction. Legal racial segregation, established by constitutional amendment in 1875 and accepted by the two major political parties, led to the creation of "separate-but-equal" schools for white and black students, with facilities and resources for blacks comparatively inadequate by most measures. Native American children attended their own schools, which were also generally substandard.