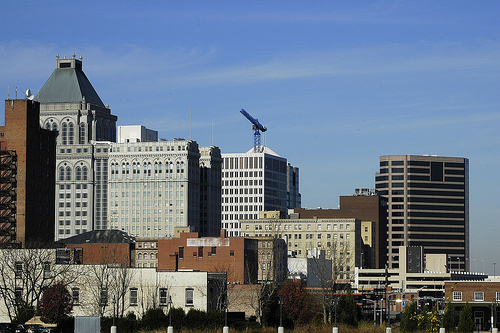 Greensboro and surrounding Guilford County were first inhabited by Occaneechi and other Siouan Indian tribes and later settled by Germans, Quakers of Welsh and English descent, and Scotch-Irish, who migrated to the North Carolina backcountry from the northern colonies, especially Pennsylvania, around the middle of the eighteenth century. In March 1781 the area was the site of a pivotal Revolutionary War battle when Gen. Nathanael Greene made a stand against the British troops of Lord Charles Cornwallis at Guilford Courthouse. Although Cornwallis prevailed, the encounter severely weakened the British force, which was forced to surrender at Yorktown seven months later.

Guilford's county seat was moved from Martinsville (originally named Guilford Courthouse), in the northwestern corner of the county, to the central location of Greensboro in 1808. Greensboro, named in honor of Nathanael Greene and originally spelled "Greensborough," soon achieved a reputation as an educational center. By 1837 Quakers in the community had formed a boarding school for training teachers. Known today as Guilford College, it was the first coeducational institution in the South. In 1838 Greensboro Female College (modern-day Greensboro College) was established. Bennett College, founded in 1873 as Bennett Seminary, has, for most of its history, been a school for African American women. In 1891 the General Assembly passed an act providing for the establishment of the Normal and Industrial School for White Girls (now the University of North Carolina at Greensboro). What is now North Carolina Agricultural and Technical State University was chartered in 1891 as the Agricultural and Mechanical College for the Colored Race.

Textiles have been important in Greensboro's economy since 1828, when Henry Humphreys built the state's first steam-powered cotton mill there. In 1895 brothers Moses and Caesar Cone picked Greensboro for their Southern Finishing and Warehouse Company, the forerunner of Cone Mills. In 1935 a company based in Burlington-Burlington Mills, founded by J. Spencer Love-moved to Greensboro and continued to diversify. VF Corporation, based in Greensboro, is the largest maker of denim jeans in the country. Major nontextile businesses include the insurance and media giant Jefferson-Pilot Corporation; tobacco company P. Lorillard; Lucent Technologies, an AT&T spinoff; and communications leader General Dynamics Advanced Technology Systems.

As the location of the famous Woolworth lunch counter sit-ins in February 1960, Greensboro drew national attention during the civil rights movement. The city has also been an important cultural and sports center. It is home to the headquarters of the Atlantic Coast Conference, and its coliseum hosts many important sporting events. Greensboro has been particularly rich in the field of music. The Euterpe Club, organized in 1889, is said to be the oldest music club in the South. R. Nathaniel Dett, director of music at Bennett College from 1937 to 1942, led the Bennett Women's Choir on annual tours in major cities across the country. The choir made appearances on a nationally broadcast CBS radio series in the early 1940s. The Greensboro Opera Association, the Greensboro Chamber Music Society, and the Eastern Music Festival provide further opportunities for musical enjoyment. Writer William Sydney Porter, better known by his pen name "O. Henry," was a Greensboro native and is memorialized by the city's annual O. Henry Festival. In 2005 Greensboro was North Carolina's third-largest city, with a population of more than 230,000.