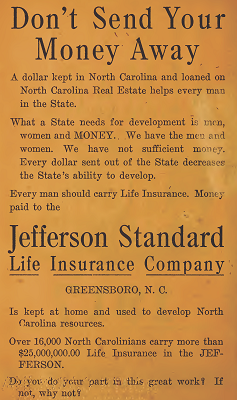 The Jefferson-Pilot Corporation is one of the largest shareholder-owned life insurance companies in the United States. During the first decade of the twentieth century, ten insurance companies were incorporated in Greensboro, the strongest of which was Security Life Insurance Company. At the same time, Jefferson Standard Life Insurance Company was founded in Raleigh, although by 1912 the company had depleted its surplus by paying excessive commissions to its agents. Security Life acquired the Raleigh firm and the new company created by the merger retained the name Jefferson Standard. Under the leadership of Julian W. Price, the company doubled its capital stock to $1 million by 1926. It survived the Great Depression by issuing policies designed to "meet the times" with a graduated payment scale that enabled people to hold on to their policies. Dividends continued to be paid, and the company continued buying bonds and lending money. It came to be considered one of Greensboro's depression-proof industries.

By 1950 Jefferson Standard's capital stock was valued at $15 million, and its total assets were $265 million. The company became Jefferson-Pilot Corporation in 1968 when a holding company was formed out of Jefferson Standard Life Insurance Company, Pilot Life Insurance Co., and Jefferson Standard Broadcasting Co. By 1980 Jefferson-Pilot's assets topped $1 billion. Despite one record year after another during the next decade, the presidency of W. Roger Soles, which had begun in 1967, was embroiled in controversy as several stockholders led by Julian Price descendant Louise Price Parsons crusaded to oust Soles for "mismanagement." An acrimonious dispute lasted from May 1991 until April 1993 and included a series of bitter courtroom episodes and turbulent stockholders meetings. The dispute was settled with the retirement of Soles, the implementation of a mandatory retirement age of 65 for officers, and a 20 percent reduction in the size of the board.

Is there available information on the agency in Germany in the mid 1960's.
I would appreciate any assistance you have in your files.
JPB

My father has a a policy from Pilot life Insurance Company of Greensboro, NC. dated October, 1958. The policy appears to be paid up and has an anniversary date to be paid. Whom would I contact for more information.

Please note this is not Pilot Life. The company is now known as the Lincoln Fincancial Group and their website is at https://www.lfg.com/public/individual.

I worked for the YWCA for

I worked for the YWCA for practically 10 years before they discontinued Pre- School Education in 2006. Your Corporation was the Independent Insurance people covering employees! Nevertheless, I didn't receive a dime during that unfortunate unemployment period when the YWCA went out of business at 6200 S. Drexel Chicago, Illinois 60637. Why wasn't I notified about my benefits during the time your Corporation took money from my pay check without nothing in return? I observed your rating is only one star, I see the reason! The Department of Commerce really should look deeper into you crooks background!!

Thank you for taking time to post your question. And we are very sorry for your loss.

NCpedia is an online encyclopedia of North Carolina information and this is a page with information about the Jefferson Pilot Company, and unfortunately we are not able to help you directly with your question.  You will need to contact the company. The company is now called Lincoln Financial Group.

My mother had a policy with Kentucky Central Life Insurance Co. that was Jefferson Pilot was the successor. How can I contact them about the benefit for this policy.
Please give me a contact number and/or address,

I am so sorry for your loss.

I am so sorry for your loss. We understand that the company is now called Lincoln Financial Group and here is the link to their website -- https://www.lfg.com/LincolnPageServer?LFGPage=/lfg/lfgclient/index.html.

I had Jefferson Pilot life

I had Jefferson Pilot life insurance for many years before they changed over. Once that happened everything ended. I was wondering what happened to the funds paid in and is it possible to get some kind of help with this matter

NCpedia is an online encyclopedia of North Carolina information and this is a page with historical information about the Jefferson Pilot Company, and unfortunately we are not able to help you directly with your question.  You will need to contact the company.  We understand that the company is now called Lincoln Financial Group and here is the link to their website -- https://www.lfg.com/LincolnPageServer?LFGPage=/lfg/lfgclient/index.html.