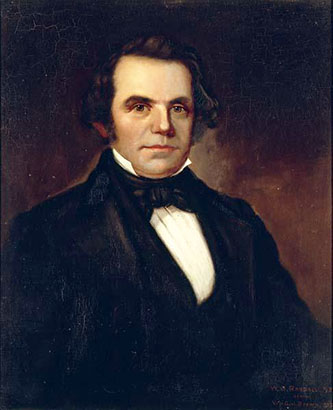 Henry Toole Clark was a lawyer, politician, enslaver, and one of the Confederate governors of North Carolina. He was born on his father's plantation on Walnut Creek near Tarboro. His father, James West Clark, son of Christopher and Hannah Turner Clark, was a Princeton graduate (1796). He represented Bertie County in the North Carolina House of Commons in 1802–3 and in 1810–11 represented Edgecombe in the house, while his brother-in-law, Henry Irwin Toole, Jr., was state senator from the same county. From 1812 to 1815, James W. Clark represented Edgecombe in the state senate; then he served a single term in Congress (1815–17). He later served as chief clerk in the Navy Department (1829–31) under Secretary of the Navy John Branch, a close friend. James Clark's wife, Arabella Toole Clark, was a daughter of Henry Irwin and Elizabeth Haywood Toole, prominent Edgecombe citizens.

Henry T. Clark began his education at George Phillips's school in Tarboro and later entered a school in Louisburg. In 1822 he enrolled in The University of North Carolina, being graduated with the class of 1826. He studied law under a relative, William Henry Haywood, Jr., who later (1843–46) served in the U.S. Senate. Although his father joined the Whig party after Branch's resignation from President Andrew Jackson's cabinet, young Henry, influenced by his Haywood cousins, temporarily remained a Democrat. He briefly joined the Whigs, because of Jackson's efforts to destroy the Second Bank of the United States.

Clark engaged in law practice only rarely. After 1830 he took over the management of his father's plantation and business affairs. This plantation benefitted from enslaved labor, and in 1835, he hired out a number of these enslaved people to planter-enslavers in Alabama, using James Hair as his agent. During the 1830s and 1840s, Clark continued to develop his extensive business interests in Tennessee and Alabama, undertaking long journeys on horseback to attend to his affairs.

In 1850, Clark was appointed colonel of the Twenty-first Regiment of North Carolina Militia by Whig Governor Charles Manly. In this capacity, as his later correspondence with Governor David Settle Reid reveals, he had the usual difficulties in equipping and arming his men. Also in 1850 he was elected to the state senate from Edgecombe. He remained a member of the senate until 1861 and was elected speaker in 1860, coming into the direct line of succession to the governorship, since there was no lieutenant governor in North Carolina until 1868. On 7 July 1861, Governor John Willis Ellis died of tuberculosis at the Red Sulphur Springs in Virginia. Clark was suddenly elevated to the governorship during the most serious crisis in North Carolina's history. Fortunately, even William W. Holden's North Carolina Standard, an opposition paper, supported the new governor.

On 16 Aug. 1861, Clark presented his official governor's message to the General Assembly. He began with words of praise for the assembly and a note of sadness for the late Governor Ellis: Ellis's "public and private virtues," he said, "have but recently been canvassed through the State, and their thorough endorsement by the people constitute his highest reward while living, and a rich legacy to survive him." Clark added that the cause of the Confederacy was just and that the Lincoln administration had forced North Carolina to go to war. He praised the army of volunteers, "who have come forward with brave hearts, and willing to enlist in the cause of their country." Then, after discussing the activities of the constitutional convention in preparing the defense of the state, he mentioned military needs, including the raising and supply of an army and the defense of North Carolina's long coastline. He described the threatened northern blockade and the former dependence of North Carolina on northern manufactured goods, concluding his able message with a statement on trade.

The history of the Clark administration is the history of the state at war: raising troops, improvising supplies and equipment, trying, unsuccessfully, to defend the vulnerable coastline, making political appointments, adjusting and regulating state-Confederacy relations, and fighting and dying for a cause that was irretrievably doomed, almost from the beginning. Clark's correspondence as governor concerns applications for commissions; camp life; the raising of companies and regiments; purchasing supplies in Europe; raising money; the activities of North Carolina and Confederate military and naval forces; the loss of such important Confederate positions as Hatteras Inlet, Roanoke Island, Albemarle Sound, New Bern, and Fort Macon; manufacturing military supplies and arms; and many other topics, mostly connected to military and naval affairs.

As northern troops gradually occupied much of Eastern North Carolina, a wave of defeatism swept over Confederates and their sympathizers. Clark was unable to combat this feeling; though he was a capable man, his personality did not rouse the people to a fever pitch of patriotism. It remained for the more popular and dynamic Zebulon Baird Vance, who became governor on 8 Sept. 1862, to rally North Carolinians to the Confederacy.

Clark left the governorship to retire in his beloved Edgecombe County. He served as chairman of the county court of common pleas and quarter sessions and for one year, 1866, as state senator from Edgecombe. He spent a large portion of his last years studying North Carolina history and corresponded with such leading figures as Governor Jonathan Worth and Cornelia Phillips Spencer on this and other subjects. He was buried in the yard of Calvary Episcopal Church in Tarboro; his wife was buried beside him.