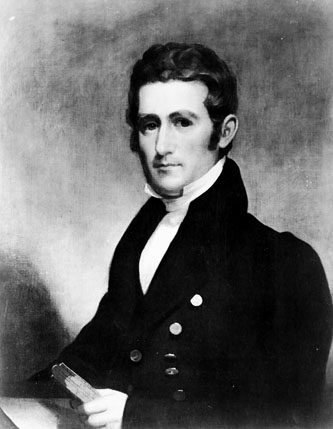 John Branch, governor of North Carolina, U.S. senator, secretary of the navy, and governor of Florida, was born in the town of Halifax. His father, John Branch, Sr., was a wealthy landowner and something of a local celebrity because of his success in ferreting out Tories in Halifax County during the Revolution. The older Branch fathered eight children by two wives. The first, and mother of John Branch, Jr., was Rebecca Bradford, daughter of Colonel John Bradford.

The younger Branch was born to wealth, and his tastes and inclinations were decidedly patrician. He attended The University of North Carolina and later studied law under Judge John Haywood, but he devoted his time to politics rather than to the practice of law. He was elected for seven terms to represent Halifax County in the senate of the state General Assembly. He was elected speaker of the senate in 1815 and held that office until his election as governor in 1817. He served three terms as governor.

It should be remembered that success in state politics was not necessarily evidence of great personal popularity. To be allowed to vote for a senator, one had to own a minimum of fifty acres of property; the property qualifications disenfranchised significant percentages of the electorate, often as much as 25 percent. In addition, the requirement that a senator had to own three hundred acres or more to hold office greatly reduced the number of citizens eligible to run for a senate seat. The governor was elected by the General Assembly. Branch's success in the legislature was based upon his wit and charm. He flattered members of the assembly profusely when he wished their support, and he was famous for his lavish dinners and parties. His ability to win support did not, however, extend beyond the legislature. When he ran for governor in 1838, after the office had been made elective, he was defeated. 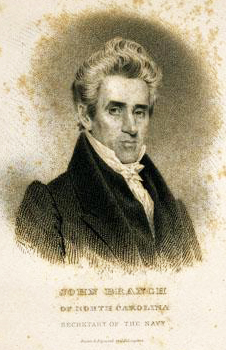 Politically, Branch was a Democrat, committed to the concept of state sovereignty. "The powers of the General Government are constantly increasing," he once noted, "and American liberty depends on the preservation of state rights and state powers." After a successful term in the U.S. Senate, Branch was appointed secretary of the navy by President Andrew Jackson, as a reward for North Carolina's support in the election of 1828. Branch was the first North Carolinian to hold a cabinet position.

Branch was an outspoken critic of banks and federal internal improvements. Although this opposition was a sound Jacksonian position, he was unfortunate enough to lose favor with the president over an embarrassing social incident known as the "Eaton Affair." Washington gossip made much of the marriage of John Henry Eaton, Jackson's secretary of war, to Margaret O'Neale Timberlake, the daughter of a Washington tavernkeeper. Mrs. Eaton's prior occupation as a barmaid, the fact of a previous marriage, and rumors of amorous affairs were enough to bar her access to Washington society. Although Jackson insisted that marriage had "restore[d] Peg's good name," the wives of the cabinet members, especially Mrs. Branch, were very pointed in their insults toward her.

Because of increasing bitterness within his official family, Jackson "reorganized" his cabinet. Branch resigned his post but contended that his resignation was the result of a "malign influence" upon the president. The "malign influence" of which he complained was that of the secretary of state, Martin Van Buren, who used the opportunity to befriend the Eatons and thus ingratiate himself with the president. In the 1832 presidential campaign, Branch tried unsuccessfully to drive Van Buren, Jackson's choice for the vice-presidency, off the Democratic ticket.

Branch served one term in the House of Representatives after his resignation from the cabinet, but his most important service was in the state constitutional convention of 1835. He spoke in favor of allowing free Negroes the right to vote and of removing all religious qualifications for officeholding. When the other delegates voted against him, Branch told the convention that he had not attended to "accommodate the ill-founded prejudices of the people."

In 1836, Branch began to acquire large estates in Florida. He and his family eventually moved there, where in 1843 he was appointed governor by President Tyler. During his term in office Florida became a state. He returned to North Carolina in 1851 and remained there until his death.

Although Branch was an opponent of federal participation in the lives of the people, he did support a variety of state schemes for public education and internal improvements. He was a former president of the North Carolina branch of the American Colonization Society.

Branch married twice. His first wife, the mother of his nine children, was Elizabeth Foort (d. 1851); his second wife, whom he married in 1853, was Mrs. Mary Eliza Jordan Bond.