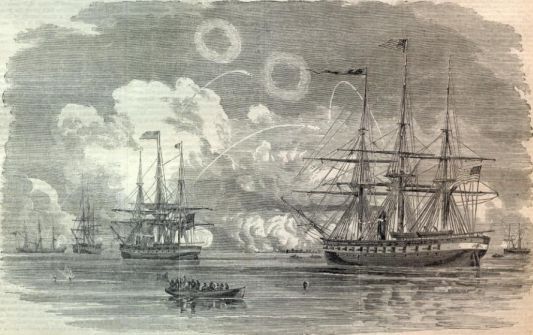 In late August 1861 the Federal victory in the Civil War battle at Hatteras Inlet deprived the Confederate army of a base for privateering, opened the interior coast to the Union, and served as a model for future combined-arms operations. The success of this mission also provided a needed boost for Union supporters in the North, whose morale suffered after the Union disaster at the First Battle of Manassas (Bull Run) in July 1861.

Maj. Gen. John E. Wool at Fort Monroe on the Virginia coast organized a contingent of troops to assist the navy in an attack on the Confederate fortifications. Commanding these men in the actual engagement would be politician-turned-major general Benjamin F. Butler. The naval squadron, led by Cdre. Silas H. Stringham, comprised seven ships. Two chartered vessels that carried the troops and several smaller ships accompanied the fleet when it weighed anchor from Hampton Roads on 26 Aug. 1861. Guarding Hatteras Inlet were two sand and log forts. Fort Clark, the smaller, stood near the ocean to cover the entrance to the inlet with its five 32-pounder smoothbores. Three-quarters of a mile west of Fort Clark stood Fort Hatteras, which guarded the channel through the inlet. Although incomplete, Fort Hatteras mounted 12 32-pounder smoothbores. Five other cannons, including a 10-inch gun that would have been invaluable in the battle, lay in the sand still unmounted.

The Federal fleet arrived off Hatteras Inlet late in the afternoon of 27 August. Early the next morning, the troops boarded small boats and made for the shore. Meanwhile, four Union gunboats opened fire on Fort Clark, whose guns did not have the range to respond. By noon the first of the Union soldiers hit the beach a short distance up from the fort. In heavy seas, only 318 of the 880 troops actually attempted a landing. They made it to shore, but their gunpowder was soaked and they had no provisions. Their vulnerability was mitigated by the fact that Fort Clark had run out of ammunition. The fort's garrison spiked its guns and retreated to Fort Hatteras.

With Fort Clark abandoned and boats in the sound fleeing the area, General Butler ordered the fleet to cease firing. Commodore Stringham sent the shallow-draft gunboat Monticello into the inlet to take possession of Fort Hatteras. The southern-held fort met the approaching warship with a well-aimed volley resulting in several hits. The Monticello fled out to sea, and the other Union vessels unleashed a barrage on Fort Hatteras.

Darkness and threatening weather halted firing temporarily. Throughout the night the exhausted garrison of Fort Hatteras received reinforcements from nearby posts, and Cdre. Samuel Barron, commander of coastal defenses in Virginia and North Carolina, arrived at the fort. At dawn the Union fleet steamed in once again and anchored just beyond range of the fort's guns but close enough for its own superior weaponry to do its work. By 11:00 a.m. the Confederates realized that their situation was hopeless, but before they could spike their guns and withdraw, a shell hit and ignited the magazine, forcing Barron to raise a white flag. Butler insisted on unconditional surrender, and Barron's officers and men became prisoners of war.

The original plan had called for the shallow inlet to be obstructed to prevent its further use. At Butler's recommendation, however, the Union held the forts and left the inlet open for the Federals' convenience. This victory represented one of the few highlights of Butler's controversial career and provided the Union with an all-important entrance into the North Carolina sounds.

"Bombardment of Forts Hatteras and Clark by the United States Fleet, under flag-officer Stringham, U.S.N." Harper's Weekly, September 14, 1961. Available from Son of the South: http://www.sonofthesouth.net/leefoundation/civil-war/civil-war-fort-hatteras-battle.htm (accessed May 16, 2012).