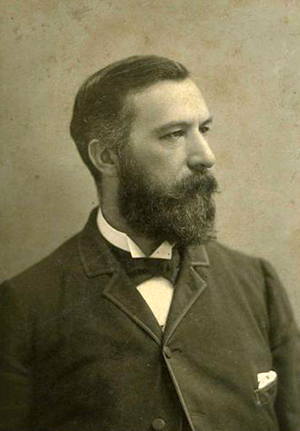 Needham Bryant Broughton, Baptist church leader, businessman, and community leader in Raleigh, was born near Auburn, the youngest of four sons and the fifth child of Joseph and Mary Bagwell Broughton. In 1854, Broughton's father died, and two years later his mother moved with her children to Raleigh. He attended school there until he was thirteen, when he was apprenticed as a printer to John W. Syme, editor and proprietor of the Raleigh Register. In 1864 the paper was suspended and Broughton went to work under John L. Pennington, editor of the Raleigh Daily Progress, where he met C. B. Edwards, his future partner. He later worked for newspapers in Richmond, Washingon, D.C., and New York City, but in 1869 he returned to Raleigh and married Caroline R. Longee. In 1871 he and Edwards bought the printing firm of Major W.A. Smith. The firm of Edwards and Broughton soon became the largest printing concern in the state; between 1887 and 1894 it received most of the business of printing and binding state publications. For a number of years, Broughton was also one of the owners of the Biblical Recorder.

Broughton was an active and dedicated Baptist layman. In 1874 he helped organize the Tabernacle Baptist Church, and in 1876 he was appointed deacon and superintendent of the Sunday school, in which capacity he served until 1913. From the late 1890s to 1913 he was vice-president of the Sunday School Board of the Southern Baptist Convention and a member of the executive committee of the International Sunday School Association. His religious activities led him into the fight for prohibition of alcoholic beverages, and in 1902 he was made president of the North Carolina Anti-Saloon League. On 27 May 1908 his efforts were rewarded with the triumph of state-wide prohibition.

A strong supporter of public education, Broughton was instrumental in saving the Raleigh public schools from bankruptcy in 1888 by securing a property tax increase in their behalf. In appreciation of his efforts, one of the city's high schools was named for him. He was also involved in locating both Meredith College and the North Carolina Agricultural and Mechanic College (later North Carolina State University) in Raleigh. He served as a trustee of these institutions, as well as of Wake Forest College, the Oxford Orphan Asylum, and the State School for the Deaf, Dumb and the Blind.

In 1900, Broughton accepted the Democratic nomination to the North Carolina Senate from Wake County in order to prevent its going to a "wet" candidate. He was elected but did not seek a second term.

Broughton retired from active life because of illness in 1913 and died in a Philadelphia hospital the next year. He was survived by his wife and six children, Edgar E., Effie, Mary Nelson, Rosa C., Caroline (Carrie) L., and Needham B., Jr. 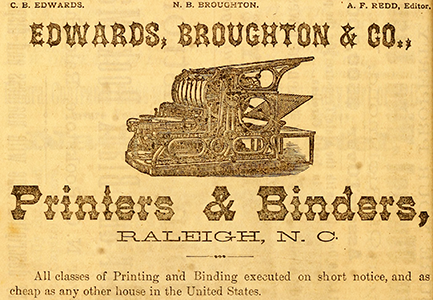