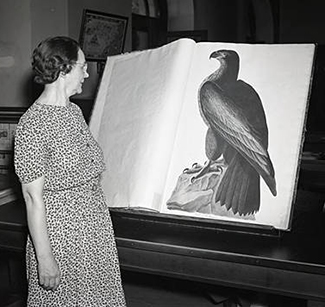 Carrie Lougee Broughton, librarian, was born in Raleigh, the daughter of Caroline R. Lougee and Needham B. Broughton and a first cousin of Governor and U.S. Senator J. Melville Broughton. She attended Peace Institute, Meredith College, and the State Normal College.

The first woman to be appointed head of a state department in North Carolina and the fourth state librarian of North Carolina, Miss Broughton served from 1918 to 1956. She became assistant state librarian in September 1902, succeeding Marshall De Lancey Haywood. The state librarian at that time, Captain Miles O. Sherrill, retired in 1917. A series of men were named acting state librarian, as the idea of naming a woman to the post was not considered by the three trustees, Governor T. W. Bickett, Secretary of State J. Bryan Grimes, and Superintendent of Public Instruction J. Y. Joyner. Meanwhile, Miss Broughton was endorsed for the position by many citizens and organizations, including the North Carolina Library Association; the North Carolina Library Commission; many librarians, including those of Meredith College, Wake Forest College, Trinity College, Davidson College, and the Woman's College; and the president of the state federation of women's clubs. No one disputed her competence. Opponents to her appointment raised the question of constitutionality, but Chief Justice Walter Clark of the state supreme court cleared the matter in a letter to the trustees, writing: "It is true, as someone has said, she is guilty of 'the atrocious crime of being a woman,' but she is a taxpayer, a good citizen, experienced and thoroughly competent. I have found nothing in the constitution of this State which forbids a woman to be appointed to any office. . . ."

On 31 May 1918, Miss Broughton was appointed until the General Assembly could meet. In the interim, she had to divide the salary with her assistant and the janitor. Finally, on 13 Mar. 1919, she was officially appointed with full salary.

Miss Broughton proceeded to organize what had begun as a miscellaneous collection in the secretary of state's office into the nucleus of a research collection for North Carolina state government and for writers, scholars, and others with information needs. She was also responsible for starting the excellent genealogical collection, which is a popular service of the present Division of the State Library of the North Carolina Department of Cultural Resources. As state librarian, she received many inquiries from descendants regarding marriages and deaths of early North Carolinians. To answer these, she began compiling records and collecting books and pamphlets. The Biennial Report of the State Librarian of North Carolina for 1 July 1926–30 June 1928 contained a fifty-eight page bibliography, "Genealogical Materials in the North Carolina State Library," complied by Carrie L. Broughton and Pauline Hill, who was chief library assistant at that time. Supplements were issued in subsequent biennial reports. Beginning in 1944, the reports also carried compilations of marriages and death notices from 1799 to 1825 from the Raleigh Register.

By the time she retired in 1956, Miss Broughton had established a fine collection of books, periodicals, and newspapers pertinent to North Carolina history, people, and literature. Six months after her retirement, she contracted a brief illness and died.