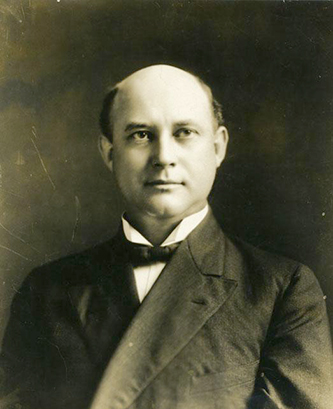 John Bryan Grimes, secretary of state of North Carolina, agricultural and cultural leader, historian, and public speaker, was born in Pitt County, the son of Bryan Grimes, a major general in the Army of Northern Virginia, and Charlotte Emily Bryan Grimes. His maternal grandfather was John Herritage Bryan, a well-known lawyer and member of Congress. Grimes was also a descendant of John Porter, speaker of the Colonial Assembly, and Colonel John Blount, a member of the governor's council in the colonial period. At Grimesland, the family estate in Pitt County, J. Bryan Grimes was taught by private tutors until age twelve when he entered the Raleigh Male Academy. From there he went to Trinity School, Chocowinity, and Lynch's School, High Point, before attending The University of North Carolina from 1882 to 1884. At Bryant & Stratton Business College in Baltimore he became better equipped to help manage the family's large land holdings in Pitt County.

In 1900 Grimes ran for secretary of state on the Democratic ticket and won at the youthful age of thirty-two. This was his first elective office, although he had been chairman of the executive committee of the Democratic party in his township since he was twenty-one, had served as aide-de-camp to Governor Elias Carr, and had been urged to run for Congress in 1898 but declined. As secretary of state from 1901 to 1923, Grimes classified and catalogued thousands of historical documents, maps, wills, papers, laws, grants, and other papers that had collected for many years in the secretary's office and made them available for use by the public. With land holdings in Pitt, Beaufort, and Wake counties, Grimes never lost his interest in agriculture and its development in the state. He was a member of the State Board of Agriculture (1899–1900); conservative member of the Farmers' Alliance in North Carolina, which he tried to keep out of politics; member of the North Carolina Agricultural Society and of its executive committee; and member of the Farmers Educational and Cooperative Union and of the State Grange. He was one of the organizers of the Tobacco Growers Association of North Carolina. Later, as president of that organization, he was an avowed opponent of the Tobacco Trust.

Grimes's interest in history evinced itself not only in his private collection of rare books on North Carolina but also in his membership in various societies including the North Carolina Historical Commission (for some years, chairman), the North Carolina Society of the Sons of the American Revolution (board of managers, later president), and the American Historical Association. He was also instrumental in the formation of the State Literary and Historical Association and a member of its executive committee, as well as influential in the development of the state's Hall of History. For several years he awarded the Mary Octavia Grimes Memorial, a gold medal, for the best essay by a student in Pitt County on a subject related to the section around that county.

As secretary of state, Grimes was an ex officio member of the Board of Education. He served on the board of trustees of The University of North Carolina and on the board's executive committee. Other memberships included the executive committee of the North Carolina Council of Defense, Scottish Society of America (president, 1918–19), Masons, Knights of Pythias, and Junior Order of United American Mechanics. He was a Democrat and an Episcopalian.

Grimes made many speeches in the fields of agriculture and history—some at the dedication of public monuments. He was the author of numerous pamphlets and broadsides. His Agricultural Resources and Opportunities of the South (1905?) was an interesting promotional tract, while two volumes that he prepared from records in his custody as secretary of state, Abstract of North Carolina Wills (1910) and North Carolina Wills and Inventories (1912), have been of great use to historians and genealogists. His illustrated monograph, History of The Great Seal of the State of North Carolina, went through many editions after its first publication in 1893. As secretary of state he was also responsible for the reprinting of The Natural History of North Carolina by John Brickell, for which he prepared an introductory note.

J. Bryan Grimes is buried in

Thank you for visiting NCpedia and taking time to share this with us.

I believe that the articles author consulted the Raleigh News & Observer obituaries as well as a summary of the funeral service published on January 14, 1923.  I have looked at microfilm of the paper and the January 14 article does indicate that Mr. Grimes was buried in Oakwood following laying in state in the State Capitol and funeral service. Additionally, the records of Oakwood Cemetery indicate burial there.

Do you happen to know if the body was moved to family plot at Grimesland?  I see that there is a marker in the cemetery for Grimes.

Thank you and I look forward to hearing back,