Twentieth-Century Innovations and the Rise of the Architectural Profession

With the turn of the twentieth century, improved rail networks and highways, industrial growth, and urbanization combined 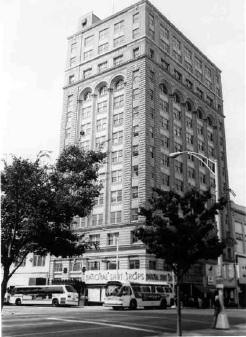 to rebuild and expand the leading towns. Influenced by the classical emphasis of the Ecole des Beaux Arts and a reaction against the late nineteenth century's expressiveness, architectural leaders revived classical ideals and advocated greater simplicity. A growing interest in city planning encouraged the City Beautiful Movement's formal layouts and separation of functions and uses. In southern cities, this ideal complemented growing emphasis on segregation of races and of industrial and residential areas.

The Gothic Revival maintained its popularity in church architecture, along with the round-arched Romanesque style and a renewed use of classical elements such as domes and porticoes. Beaux Arts classicism shaped major public building projects, from the expansion of the University of North Carolina in Chapel Hill to Duke University in Durham. Facilitated by trolleys and automobiles, and following the trend toward city planning and segregation, residential suburbs developed at the edges of the principal cities.

In the early 1900s, architects such as Herbert Woodley Simpson of New Bern and C. C. Hook of Charlotte initially combined Queen Anne-style massing with classical columns and other "colonial" motifs, but they soon turned to more restrained and symmetrical forms as the Colonial Revival grew into the favored residential style. Also popular in the 1920s, especially in western North Carolina, was the Tudor Revival style, with its half-timbered effects and picturesque outline, as well as other various naturalistic and rustic modes regarded as suitable to the rugged landscape.

Especially numerous among smaller houses was the shotgun plan, a narrow, one-story house type built most often in neighborhoods developed for black families who had moved to growing towns to find work. Some scholars attribute the form to Caribbean meldings of French and African concepts. The nationally popular bungalow gained wide use. This informal house form and style, developed from progressive and Craftsman ideals and associated with California, was promoted through magazines and catalogs. The bungalow typically had a low-slung silhouette, simple detailing including tapered porch posts and rafter ends, natural materials, and a porch. Another widely built Progressive Era style of residence was the foursquare house, typically two stories with a low hip roof, a simple porch, and unpretentious detailing. While most of these houses were built on site by local contractors, both types were also available in precut kits, in which standardized manufactured elements were shipped to the customer for speedy erection on the site.

The Great Depression brought building nearly to a standstill in North Carolina. Gradually federal employment projects put builders back to work. Prominent among the federal works projects of the era were schools and small post offices, typically in red brick or native stone with simple classical detailing. The Civilian Conservation Corps erected a number of rustic stone and timber recreational buildings in state and national parks and forests. Most spectacular was the creation and construction of the Blue Ridge Parkway, a beautiful feat of engineering and landscape design threaded along the eastern edge of the Appalachian Mountains.