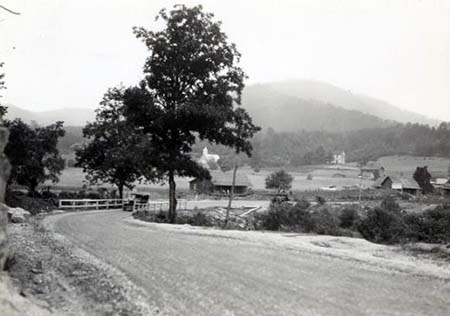 In 1920, for the first time in American history, the United States census revealed that a majority of Americans lived in urban areas. Not so in North Carolina. Despite the steady growth of towns and cities and the dramatic expansion of industry in the state, in the fifty years after 1870 the lives of most North Carolinians remained rooted in agriculture and centered on the farm. Day-to-day life as it would have been on a late-nineteenth, early twentieth-century middle-class family farm can be seen today at Horne Creek Living Historical Farm in Surry County. On the farm, in 1900, Thomas Hauser and his family and hired hands raised typical regional crops of fruit, corn, wheat, oats, rye, hay, and vegetables.

At the root of dozens of shared customs was shared scarcity. East and west in rural North Carolina, those who "come up poor" were the majority. Rural ingenuity enabled thousands of farming families to live on their own resources with little cash income. "Making do" involved the women of a household in the production of their own soap by boiling lye and animal fat. It meant plucking geese or chickens to make downy feather beds for the grown-ups, stuffing corn shucks or straw into bed-ticks for the young. "Getting by" meant a large garden and as much cropland as could be spared given over to raising one's own food: corn, wheat, sweet potatoes, orchards, milk cows, hogs, goats. And it meant knowing how to salt the meat and preserve the fruit and vegetables. "Making do" meant feed-sack blankets to keep in the warmth on snowy nights, quilts crafted from colorful scraps of cloth, rugs woven of bright yarn. It meant clothing sewn at home—and then patching and more patching, so "it got to where we couldn't tell where the clothes left off and the patches began." It meant a knowledge of folk medicine: how to use snake oil to lubricate childbirth and how large a dose of calomel to give the grandchildren each spring "to cleanse them out," as well as how much was healthy and how much would "take your teeth out." It meant relying on community midwives or "granny women" to deliver babies.

Whether they owned their land or worked someone else's, North Carolina farm families rarely relied on their own resources alone. Sharing was a vital feature of country living. While the crops were growing, a family "caught up" on its work might help neighbors and relatives with theirs. In times of need—illness, death, accident, debt—family members contributed food and support to each other. Many of the young continued to choose their mates among close neighbors and to reside in home communities that abounded with cousins and kin. Family ties and well-worn footpaths known to those in the community provided links and grassy highways from home to home. Sundays would see the members of each community gather at a neighborhood church in their Sabbath best.

The Perils of Productivity

Because emancipation brought freedpeople neither land nor mules, seed nor credit, most settled for the halfway houses of tenancy or sharecropping and farmed a portion of a white owner's land as renters or for a third- to a half-share of the crop. For former planters, the new system at least provided laborers for their land, though profits fell. For the black sharecroppers or tenants, the new order afforded a limited but vital measure of freedom—the freedom to live away from the "Big House," to decide whether the wife and the children of the family would work and at what pace they would labor, to choose what goods they would buy with their livelihood, and perhaps above all the right to serve the Lord in their own church and to seek an education for themselves and their children.

Yet by the 1880s it was clear that a second change—as momentous as emancipation—was under way in rural North Carolina. Thousands of the state's farmers began growing the bulk of their crops for market. The shift seemed eminently sensible. The reconstruction of the state's railroads, the growth of towns and industries, and the multiplication of cotton gins and tobacco warehouses, where crops could be hauled in a day and sold for cash on the spot, made it entirely practical to farm for profit. With a little credit for mules and tools, with a small advance that would cover the cost of food and goods no longer produced at home, cultivators had every reason to hope that the days of postwar poverty were behind them and that they could get ahead at last.

Farmers went into debt to prepare and fertilize their crops and to provision their families during the year. Devoting most of their land and time to cash crops, they purchased food they had once raised for themselves and ready-made merchandise they had once fashioned on the farm. At the year's end, time and again, they discovered that the very abundance of the harvest had depressed agricultural prices. The cost of credit and warehousing and transport became crucial in making the difference between profit and loss—yet these costs were high and seemingly beyond farmers' control. Nor was there any easy escape back to subsistence. Under the crop-lien system, when the farmer did not "pay out" his debt to the landlord or furnishing merchant, he was legally bound to give the creditor a mortgage on his next year's crop. So he labored to produce still more tobacco and more cotton. Yet greater production seemed to bring only lower prices and profits. By 1890 one of three white farmers and three of four black farmers in the state found themselves tenants or sharecroppers—and the rest were fearful. The unintended harvest of the plunge into commercial agriculture was an annual bonanza crop of debt and dependency.

Scientific agriculture and agricultural protest were not exclusive but complementary strategies for reform. No life better illustrates their connection--and the forces that drove reformers into insurgency—than the career of Leonidas L. Polk. In 1887 the editor of the Progressive Farmer became head of the North Carolina Alliance. He proved as magnetic in the meeting hall as he had been persuasive with the pen. "My own father was one of thousands," a North Carolinian recalled, "who thought of Col. Polk almost as if he had been a God-given Moses to lead them out of the wilderness." Elected president of the National Alliance in 1889, he crisscrossed the country for the next three years, urging farmers from Michigan to Georgia, Kansas to the Carolinas, to trample "sectionalism under our feet" and build a great coalition for the "coming struggle."

By 1892 Polk was a transformed man. The state agricultural reformer had become the national leader of a mass democratic rebellion. In February of that year, speaking in St. Louis, he called for "the great West, the great South, and the great Northwest, to link their hands and hearts together and march to the ballot box and take possession of the government and run it in the interest of the people." He pressed for a revolution at the ballot box and was the certain presidential nominee in 1892 of the rebellious new Populist (or People's) Party. The Populist demands of 1892 were no less than extraordinary: government control of the nation's banking system and currency, national ownership of the country's railroads, publicly owned warehouses to hold the crops of farmers, and government loans and credit at an interest rate of 1 percent a year. Only Polk's sudden death at the age of fifty-five three weeks before the convention denied him the Populist nomination. But by then the Alliance movement had evolved radically from the cooperative crusade.

Rising farm prices in the early twentieth century, and particularly during World War I, removed much of the urgency and desperation that had fueled the farmers' movement. Even in times of greater well-being, however, some farmers experimented with cooperatives and farmers' unions to control prices and credit. A more socially responsive Democratic Party took up the Populist call for universal public education and railroad regulation, though Democratic educational expenditures in fact favored the school districts of the white and well-to-do, and though the regulatory commission worked compliantly with the railroads. Tranquility and a moment of prosperity had returned to the farms of the state by 1919, but the good times were brief. The plummeting of farm prices in 1920 set the stage for another prolonged agricultural depression, for the descent into tenancy and poverty of still more thousands of North Carolinians, and for renewed migration to the cities.

More NCpedia articles about life in North Carolina 1870 to 1920: