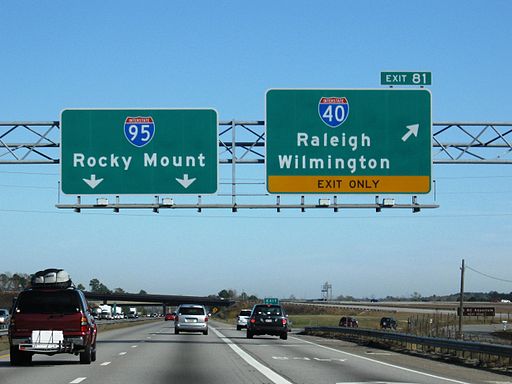 Getting There: North Carolina Shakes Off Provincialism as Interstate Highways Develop

With the federal government's entry into interstate road building in the 1950s and Governor Dan Moore's successful 1965 campaign to obtain approval of a $300 million bond issue, North Carolina emerged from its isolation and began shaking off its provincialism.

By 1970 the interstate highway system in North Carolina covered 450 miles. A spectacular 22-mile-long section, opened in 1968, stretched from Cove Creek in Haywood County to the Tennessee line on Highway I-40. This section, which wound through the Pigeon River Valley, with the river on one side and jagged mountain slopes rising sharply on the other, was a cut blasted out with 125 train carloads of explosives. Other interstate routes connected Virginia and South Carolina across the Coastal Plain (I-95) and Piedmont (I-77), while I-85 swept across the Piedmont through Durham, Greensboro, and Charlotte.

Invigorated by rural free delivery and improved means of transportation, North Carolina's newspapers between 1920 and 1970 improved steadily in quality and increased considerably in size. Newspaper circulation, which passed 2 million in 1926, was led by the city dailies such as the Charlotte Observer, Raleigh News and Observer, and Greensboro Daily News. The number of papers fell as metropolitan dailies encroached on the territory of small-town and rural weeklies. In 1939, for example, the state had 227 papers; by 1960 the figure was down to 194, including 47 dailies. The Charlotte Observer captured and held the lead in circulation over its competitors, raising its pressruns to almost a quarter of a million per issue by 1960.

For its relatively poor condition in some respects, North Carolina enjoyed a high reputation for the quality and dynamism of its newspaper press. Josephus Daniels, secretary of the navy and ambassador to Mexico, earned renown for the influence he exercised as editor of the News and Observer. His fearlessness extended to attacks on the powerful tobacco and textile interests, which controlled so much of his newspaper's advertising. The chief voice of liberalism in the state in the 1920s was that of Gerald W. Johnson of the Greensboro Daily News, an eloquent firebrand who was not infrequently instrumental in directing the drift of popular opinion and the impetus of public policy through his editorials.

The integration of North Carolina's once-fragmented provinces and sections was not due entirely to better highways and the periodical press. It also owed something to the expansion of telephone and radio service, the introduction and development of television and the airplane, and the role of railroads.

To learn more about the development of information and transportation infrastructure in North Carolina, visit these articles: