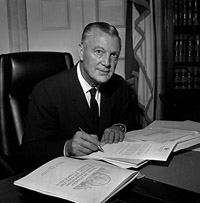 With years of experience on the bench, Dan K. Moore (1906-1986) brought to the Governor’s Office during the turbulent 1960s a calm, judicial temperament and a moderately conservative approach to balanced state government, a philosophy he termed “total development.” Tagged “Mountain Man” during the 1964 campaign, Moore was born on April 2, 1906, in Asheville. His father Fred Moore, a Superior Court judge, died when young Moore was two years old and his mother, the former Lela Enloe, moved the family to Jackson County. In 1927 he graduated from the University of North Carolina with a business degree and then for a year studied law in Chapel Hill. In 1933 he married Jeanelle Coulter of Pikeville, Tennessee; they would have two children.

From 1931 to 1933 Dan K. Moore was attorney for Jackson County and for twelve years he was the attorney for the local school board. Moore served a single term in the state House in 1941. In 1943 he entered the U.S. Army as a volunteer and served in Europe. On his return in 1945 he was elected solicitor and in 1948 Governor R. Gregg Cherry appointed Moore to the Superior Court. Two years later Judge Moore was elected to a full term and served until his resignation in 1958, when he moved to Canton and became counsel and assistant secretary of Champion Papers.

Moore retained his strong interest in politics and in 1964 entered the contest for the Democratic nomination for governor. After the first primary the leader was L. Richardson Preyer, who had the support of Governor Terry Sanford and was the most liberal of the three major candidates. Third-place finisher I. Beverly Lake, the most conservative, threw his support to the moderate Moore in the runoff where Moore bested Preyer. In the fall Moore defeated Republican Robert L. Gavin, who had also lost to Sanford in 1960.

As governor Moore employed a reasoned, deliberate approach to issues and, a number of times, appointed study commissions to assist in decision-making. In the closing days of the 1963 session the General Assembly enacted a law barring Communists from speaking on state campuses. Moore’s nine-member commission, headed by David Britt, recommended that trustees at each institution set policy with respect to speakers. A special session of the legislature in 1965, called by Moore, endorsed the idea. In 1968 a federal court declared the original law unconstitutional.

In his inaugural address Governor Moore introduced his concept of “total development,” that is, his aim to develop all of the state’s resources without emphasis or detriment to one. His agenda included a $300 million road bonds package approved by voters in 1965, increased teacher and state employee salaries, court-ordered reapportionment of legislative and congressional districts, institution in 1967 of “brown-bagging” as opposed to liquor by the drink, an emphasis on highway safety, and creation of a Law and Order Committee to deal with racial unrest. Following the assassination of Martin Luther King Jr. in 1968, Moore deployed the National Guard and Highway Patrol to curb violence. During his administration Charlotte College became the University of North Carolina at Charlotte, the School of the Arts opened, a zoo study commission was created, the State Court of Appeals was established, and the first state welcome centers were built.

After his term as governor Moore joined a Raleigh law firm and in 1969 was named by Governor Robert W. Scott as an associate justice on the North Carolina Supreme Court. He was elected to a full term in 1970 and served until 1978. The following year Governor James B. Hunt, Jr. named Moore to chair a commission on transportation needs and financing, a board which recommended a motor fuels tax increase later approved by the legislature. Moore, a Methodist, died on September 7, 1986, and is buried in Oakwood Cemetery in Raleigh.

Powell, William Stevens. 1962. North Carolina lives; the Tar Heel who's who. A reference edition recording the biographies of contemporary leaders in North Carolina with special emphasis on their achievements in making it one of America's greatest States. Hopkinsville, Ky: Historical Record Association.