Congressional Districts in North Carolina, as in other states, have varied widely in size, shape, and number since the state ratified the U.S. Constitution in 1789. The number of congressional districts, reflecting the state's share of representatives in the U.S. House based on the decennial federal census, has ranged from as few as 7 (1865-72) to as many as 13 (1812-43, 2002- ).

Drawing the boundaries of congressional districts has been the duty of the North Carolina legislature since 1789. The first districts were named after five geographic divisions: Western (now Tennessee), Yadkin, Roanoke, Edenton and New Bern, and Cape Fear. In 1790 these five were realigned, becoming the Yadkin, Centre, Roanoke, Albemarle, and Cape Fear Districts. After the first U.S. census in 1790, numbers were assigned to districts in 1792, ranging from the First District (Buncombe and four western counties) to the Tenth (Johnston County eastward to Hyde); the west-to-east pattern was reversed in 1802, then reimposed in 1852. These districts remained contiguous geographically, although both the number and exact grouping of counties often changed markedly from one census to the next. 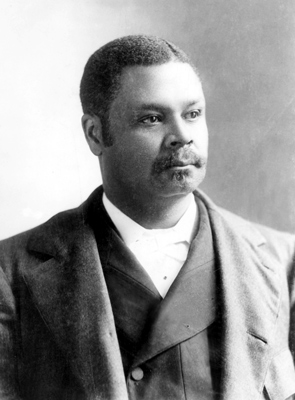 County boundaries were long considered sacrosanct dividing lines by the General Assembly's map drawers because of the legal priorities set out in Article II, sections 3(3) and 5(3), of the North Carolina Constitution. Consequently, juggling the counties to create a reasonable population balance was often complicated. In some instances, redistricting involved both political and demographic factors, such as in 1872, when the Democratic General Assembly attempted to group most of the state's Republicans into one eastern district, the so-called Black Second. Knowing a Democratic candidate could never win the district, the General Assembly selected the counties of the Black Second to isolate and neutralize eastern Republican voters, many of whom were former slaves. From 1872 to 1901 the redrawn district's African American population, nearly 66 percent of the total, elected black congressmen seven times. George White was the last of these early black congressmen in the state, representing the Second District before African American voters were largely disfranchised around 1900. Drawing district lines in favor of Democratic incumbents whenever possible was another device often employed by the General Assembly, since Democrats controlled the legislature during every postcensus session between 1872 and 1991.

After federal pressure to create two predominantly black districts in the state prompted the General Assembly to undertake a cumbersome and complicated redistricting process, the county-boundary rule was seemingly discarded in 1991. Electoral boundaries were adjusted, at least in part, to provide minorities a reasonable opportunity to elect their candidates to Congress, in compliance with the Voting Rights Act of 1965. The results were oddly shaped, long, narrow connectors between centers of black populations: a redrawn First District encompassing 9 eastern counties and parts of 19 more, stretching from Virginia to South Carolina, and a completely new Twelfth District in the Piedmont, which snaked from Durham County west and south to Mecklenburg County, mostly along the narrow "Urban Crescent" of Interstate Highway 85. The process affected adjacent districts as well; almost half of the state's 100 counties were divided, including Cumberland County, which was distributed among the First, Seventh, and Eighth Districts. 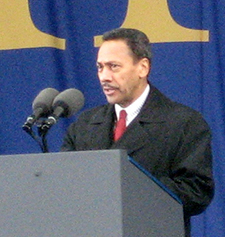 In 1992, for the first time in nearly a century, North Carolina voters elected two black members of Congress: Melvin Watt from the new Twelfth District and Eva M. Clayton from the First District. Both Watt and Clayton were reelected several times. But the redistricting that helped lead to their election sparked a number of court battles in the 1990s. Disputes over the districts found their way to the U.S. Supreme Court four times in eight years. At the center of the conflict was Watt's Twelfth District, which was struck down as unconstitutional in 1993 and 1996. In response to these decisions, the state redrew the district twice more, in 1997 and 1998. Finally, in 2001 the Supreme Court upheld its boundaries in a narrow 5-4 decision-just in time for another round of redistricting following the 2000 U.S. census.

The census in 2000 qualified North Carolina for an additional congressional seat, bringing the total number of its congressional districts to 13 for the first time since the early nineteenth century. The new district, located in the northern Piedmont along the North Carolina-Virginia border, encompasses all of Person and Caldwell Counties and parts of Wake, Alamance, Granville, Guilford, and Rockingham Counties. Stretching from Raleigh to Greensboro, the Thirteenth District is primarily urban/suburban, with only about one-third of its voters living in rural settings or small towns. In 2002 Democrat Brad Miller was elected the first U.S. representative from the new Thirteenth District.

Benjamin R. Justesen, George Henry White: An Even Chance in the Race of Life (2001).

Who was the member of

Who was the member of congress representing the congressional district that includes the area in which Marine Corps Base, Camp LeJeune resides in the 1990's?
Thanks, I'm using this in a book about Navy Medicine and am writing about the hospital there.

First, are you still looking for this information?  If so, I would be very glad to help you.  And if you are, do you have a specific year in the 1990s that you are interested in?  At first glance of a few historic resources, I see that there was an additional district added around 1994 and there was some redrawing of the maps.  If you have a specific year, that will help me try to pinpoint this for you.

Thank you and I look forward to hearing back from you.  Please feel free to post back here or reply to my email message.

I am interested in finding out what district Ashe County was part of in the years ranging from 1785 to 1795.

Thank you in advance.

Thanks for contacting NCpedia. I am referring your question to a reference librarian at the NC Government & Heritage Library. If you need further assistance please email them at slnc.reference@ncdcr.gov