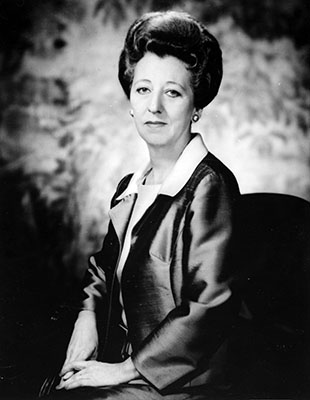 All of North Carolina's first ladies who have lived in the Executive Mansion have in some way left their personal mark, whether it was a grand piece of furniture, silver, or their special hospitality. None has left a more lasting imprint that Jeanelle Coulter Moore, wife of Governor Daniel Killian Moore. The mansion's present beauty, grace, charm, and perhaps its continued existence as the governor's official residence, are a credit to Jeanelle Moore. Jeanelle Coulter was not a native of her beloved North Carolina; she was born in Pikeville, Tennessee, on July 13, 1911, the daughter of Coy Hixson and Margaret Colvard Coulter. She attended the University of Tennessee briefly before transferring to Western Carolina Teachers College in Cullowhee (now Western Carolina University), where she received her degree in education. In 1931, while visiting relatives in western North Carolina and taking a summer course at Western Carolina, she attended a local church. On that particular Sunday morning, she met the Sunday School superintendent, whom she described as the most hand­some man she had ever seen. On May 4, 1933, Jeanelle Coulter and Dan Moore were married. Jeanelle Moore briefly taught second grade in Sylva in western North Carolina until the birth of Edith Coulter Moore, the first of their two children. The Moores had a second child, Daniel Killian Moore Jr. Both children were grown and married by the time Dan K. Moore became governor.

When her husband announced that he was going to run for governor, Jeanelle Moore was not excited. In fact, she did not want him to run. However, she became his most loyal cam­paigner and supporter. During the 1964 campaign, she traveled the state of North Carolina making appearances and giving speeches. At one point during the campaign, she accompanied the first lady of the United States, Lady Bird Johnson, aboard Mrs. Johnson's train, the Lady Bird Special, on a campaign tour of the state. Mrs. Johnson was impressed with Jeanelle Moore's speaking ability and told her she would give anything to be able to speak impromptu with her ease.

Upon Governor Moore's inau­guration, Jeanelle Moore became an actively involved first lady. Before becoming first lady, Governor Terry Sanford had appointed her to the board of the North Carolina Fund to study the causes of poverty in the state. With an agenda of her own, she was the first governor's wife to have a full-time secretary and maintain her own office in the mansion.

In 1958, while her husband was a superior court judge, the Moores toured the Raleigh Correctional Center for Women. Jeanelle Moore was dismayed to discover that the prison did not have a chapel. During Holy Week in 1966, the first lady launched a project to raise private funds to build a chapel. By December 18 of that year, with the majority of the funds in hand, groundbreaking ceremonies were held for the "Chapel of the Nameless Woman." In later years, Mrs. Moore would consider the place of worship her most cherished project.

Without Jeanelle Moore's interest in and dedication to the North Carolina School of the Arts in Winston-Salem, that institution may never have been fully funded. After hearing the school's visionary first president, Vittorio Giannini, speak passionately about what such an institution would mean to students of the arts, she vowed to assist the school in what­ ever way she could and convinced her husband and the legislature of its importance. From that time until her death, she poured her energies and talents into the school as a member of its foundation, its board of trustees, and as a friend. Governor Terry Sanford publicly acknowledged the fact that Governor and Mrs. Moore were responsible for the success of the school. In 1996 Jeanelle Moore received the Giannini Award in recognition of her annual financial con­tributions to the School of the Arts, as well as for meritorious service to the institution.

Her primary interest as first lady was the governor's residence itself. She quickly tired of the comments about the ugly gingerbread house on Blount Street. She was equally concerned with the deterioration of the interior of the building and the inadequacy of the fur­nishings and lack of proper decor. She called her first press conference at a luncheon only a few months into her husband's administration and announced the formation of the Executive Mansion Fine Arts Advisory Committee. Through that committee, the first lady hoped to increase awareness of the need to preserve the mansion and to promote its improvement through furnishings and works of art.

In 1965 there was a national movement toward historic preservation, as well as a renewed awareness of cultural resources in general. Jeanelle Moore took advantage of that trend and called upon Lorraine Pearce, who had been the first curator of the White House and overseer of the redecoration of the White House during the Kennedy administration, to develop a plan to preserve orth Carolina's executive residence. The Executive Mansion Fine Arts Advisory Committee held its first meeting on November 12, 1965, with Moore and Pearce in attendance. At Mrs. Pearce's suggestion, a tea was planned for June 20, 1966, with represen­tatives of all one hundred counties invited. This event was a vital boost to a fundraising campaign that would lead to the donation or purchase of major furnishings in the mansion's public rooms. The governor became involved with the first lady's interest in preserving the mansion. Governor Moore personally drafted legislation to establish the committee perma­nently as a state statutory committee, now the Executive Mansion Fine Arts Committee in the Department of Cultural Resources. Without Jeanlle Moore's efforts to establish the committee and her ongoing interest in its mission to preserve the mansion at 200 North Blount Street, the house may well have been aban­doned as the governor's residence in the last quarter of the twentieth century. Much of the current splendid beauty of the Executive Mansion is a lasting tribute to Jeanelle Coulter Moore.

As first lady, Jeanelle Moore had many other interests. She was said to be the busiest first lady in the state's history. She christened ships, a B-52 bomber named The First Lady at Seymour Johnson Air Force Base in Goldsboro, and the research vessel Dan K. Moore. She also headed the state's high­way beautification program, later known as Keep North Carolina Beautiful, a venture that she would continue to support actively long after her term as first lady. She was an advocate of tourism and of North Carolina's historic sites. She was especially active in the promotion of Tryon Palace and received a special citation from the Tryon Palace Commission for her work. Tradition was broken when she was elected president of the Sir Walter Cabinet while her husband was still governor.  At the end of Governor Moore's term, a half­ hour television program titled "A Tour of the North Carolina Executive Mansion with Mrs. Dan K. Moore" aired across the state. The program highlighted the results of her four-year labor of love and that of the Executive Mansion Fine Arts Committee.

After leaving the mansion, Jeanelle Moore remained active in various causes and institutions. She was a trustee of the North Carolina Museum of Art and a member of that institu­tion's education committee. When the art museum's new building was com­pleted, she served as chairman of the dedication committee. She was both a trustee and a mem­ber of the executive committee of the North Carolina School of the Arts and a trustee of the Raleigh Boys Choir. Jeanelle Moore also served on Meredith College's board of advisers and on the board of directors of the Raleigh Rescue Mission. She received many honors throughout the years. The highest honor, however, was bestowed upon her and Governor Moore in 1980 when, together, they received the North Carolina Award for Public Service.

Governor and Jeanelle Moore continued to live in Raleigh, where he was a North Carolina associate justice of the Supreme Court from 1969 until he retired in 1978. Daniel K. Moore died in 1986. Jeanelle Coulter Moore continued to be active until shortly before her death on October 20, 1999, at the age of eighty-eight. At her death Governor James B. Hunt Jr. pro­claimed that "North Carolina has lost one of its strongest advocates of beauty and art." Her funeral was held at Edenton Street Methodist Church, where she and her husband had been active since his election as governor. She was buried in Raleigh's Oakwood Cemetery alongside Governor Moore. She was survived by her son and daughter, three grandchildren, and eight great-grandchildren.

Thank you for such a beautiful article about my husband's grandmother. "Nell" was a spitfire with a heart of gold. She was so very loving and warm and stunning, and she made you want to be a better person just by being with her. I've never heard an unkind word from her, nor have I heard an unkind word about her.